Brendan McCreary and Raya Yarbrough are performing in a unique double-bill concert at Room 5 in Los Angeles, on November 28th, 2009.  I will be a guest musician, playing accordion. 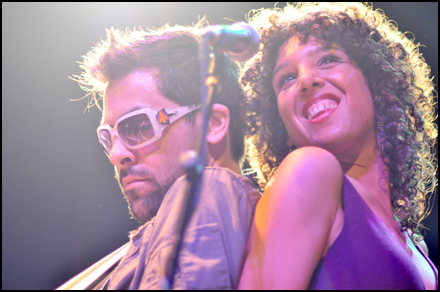 I normally don’t blog about every single concert by members of my Battlestar (and/or literal) family, but this one is special.  Rather than simply dividing their time into two sets, Brendan and Raya have integrated their songs into one seamless set list.  And rather than missing their full bands, I’ve found that the intimate musical setting allows you to appreciate every note, every gorgeous harmony and catchy melody even more.  We’ve been rehearsing in my living room all weekend, and it sounds frakkin’ incredible.  Even though its an acoustic set, it’s going to truly be epic.

In addition to their remarkable original songs, they’re playing a few choice covers and a world premiere performance of a song that Brendan and I actually wrote together (believe it or not, the only song I’ve ever co-written with him).

If you’ve only seen them perform at one of our big BSG concerts, you’ll be amazed at how much they express with just two guitars and their voices (and an accordion to help).

Room 5 is an intimate room connected to a nice Italian restaurant, so you can come for dinner as well as the show.  Or, as Brendan’s Myspace says: “Myself and Raya Yarbrough will be taking the stage for an early evening go round of song smithing and singing. Bring some T-Giving left overs and throw shit at the stage!”

Hope to see a few of you there!