The second episode of “Marvel’s Agents of S.H.I.E.L.D.,” called “0-8-4-,” follows our heroes to Peru to track down the object of unknown origin hinted at the end of the pilot.  The episode expands our knowledge of some of the main characters and features substantially more action than the pilot, which made the score a unique challenge. It is common for a series to take a few episodes to grow and find its tone, and the same is true for a score. Fans may notice that my music takes evolutionary steps over the next few episodes. Personally, I think that each score is better than the last, which is an exciting and rewarding artistic experience.

For this episode, I had an even bigger orchestra at my disposal and so I pushed the score further in an orchestral direction. We expanded the woodwinds to include a full section of low winds, including contrabassoon and bass clarinet. We added harp to the ensemble as well, which brings huge swelling crescendos to symphonic life. It may seem like the addition of a few instruments to an already massive orchestra wouldn’t make a huge difference, but those new colors in my toolbox allowed me to expand my writing in surprising ways, adding new dimension and textures. 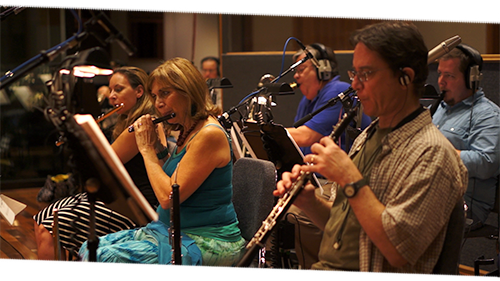 While my orchestral writing has become more traditional and, at times, grandiose, I also took time to counteract those traditional symphonic sounds with beefier and more aggressive synths.  My synthesizer programming in “0-8-4” is intense, and anchors the music in a modern setting.  This episode is almost entirely one giant action cue (or so it felt when I was writing it!) so I relied on the heavy synths and pounding percussion to cut through the chaos during moments when the orchestra alone would be unable to compete with the sound design.

The South American setting of “0-8-4” gave me an excuse to bring an ethnic component to the score.  Ultimately, “S.H.I.E.L.D.” is a globe-hopping adventure series, so it was inevitable that the music would be needed to help sell the geography.  In this case, there’s a wealth of regional music to draw from. 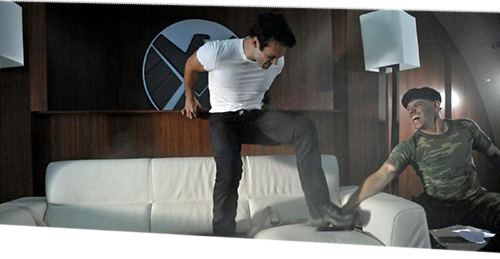 I expanded our percussion sessions to include congas, in addition to low toms, shakers and other tribal-sounding drums.  I worked with percussionist M.B. Gordy, who’s energetic performances have been heard in nearly every project I’ve ever scored, including the taiko-drum-laden “Battlestar Galactica.” M.B. brought an improvisational energy to the score and laid down fantastic conga grooves and spooky ambient fluttery phrases that help transport us to South America.

I also brought in my friend and frequent collaborator Chris Bleth to play ethnic woodwinds.  Like M.B., Chris has played on virtually every score I’ve ever composed and I knew I could count on him to whisk us away to Peru. For melodic phrases, I wrote for him to play the quena, a traditional flute from the Andes.  The quena is most noticeable when Fitz and Simmons first see the mysterious Incan temple in the jungle.  When played with the instrument’s signature vibrato, it has a fantastic and recognizable sound. 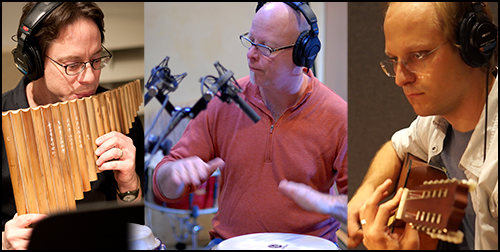 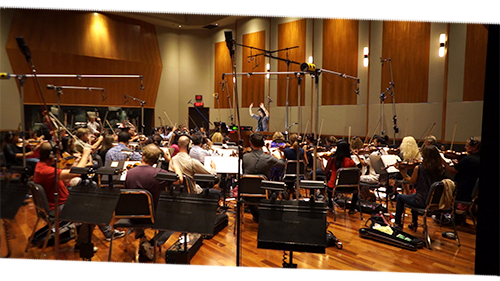 Guitarist Ed Trybek also recorded on this episode, bringing in an arsenal of South American guitars, including timple and charango, as well as more traditional steel string and nylon string guitars.

The pan flute, quena, timple, charango, congas and ethnic percussion are woven throughout the cues set in the Peruvian jungle.  My favorite is definitely the car chase in the second act.  For this, my inspiration was the music of the various Peruvian pan flute bands that seemed to pop up all over Los Angeles a few years ago.  I challenged myself to take these grooves and convert them into a full-blown, orchestral action cue – to create the “Peruvian Pan Flute Band From Hell.”

During this cue, I used the signature rhythmic hemiola that is common in this kind of music (6/8 against 3/4 or vice versa) and set it to energetic pan flute parts. A screaming quena solo wails above blistering conga grooves and a searing distorted synth bass, while the orchestra shreds with action ostinatos and piercing stabs. It’s one of the weirdest action cues I’ve ever written since “Dark Void,” to which it probably owes some inspiration, I must admit. 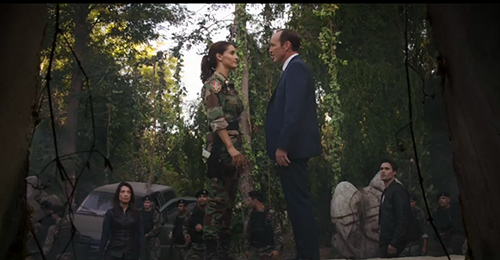 SPOILERS BEYOND: Thematically, “0-8-4” expanded my use of the main theme and introduced new themes as well. The primary theme of the series remains the Main Theme, or Coulson Theme:

I try to reserve the Main Theme for only the most dramatic moments, high tragedy or kick ass action.  We first hear the theme in the opening shot of the episode, in a grand and serene statement while the bus is flying over peaceful seas.

Later, there’s a great shot in the middle of Act Two’s combat scene, where the camera spins around Camilla and Coulson while they’re shooting guys and looking generally like badasses. Here, the brass pound out a soaring statement of the Coulson Theme while I track the movement of the camera with a severely distorted two octave drop in the synthesizer bass: a weird combination of thematic orchestral writing and a simple dubstep trick.  But, it gets the blood pumping, for sure! (This moment is actually featured in this week’s video blog, at around 0:54.)

The 0-8-4 is a Tesseract weapon of extreme power.  Since this is a big connecting thread to the Marvel cinematic universe, I felt it was time to write the Tesseract Theme:

As heard in “0-8-4,” the Tesseract Theme is an ominous melodic line that shifts between two distantly related minor chords. I frequently state the theme in low woodwinds, like the bass clarinet, or the bottom register of the French horns, to give the theme a reedy, distorted timbre. Very creepy. I wanted the score to suggest that this device is incredibly dangerous, and indeed, just one piece of a larger Tesseract puzzle.

The other new theme is introduced at the episode’s conclusion, during the rocket launch.  This scene is incredibly important to establish the tone of the series. Our heroes have, momentarily, set aside their bickering and completed their first successful mission together. The casual intimacy of our team sitting with a cooler of beer combined with the spectacle of the distant rocket climbing into the sky makes this one of the most compelling scenes of the series thus far. This milestone moment for our characters needed a new theme to commemorate it. For lack of a better term, let’s call this The Agents Theme:

This melody represents the emotional bond between the team. It has a different function than the Main Theme, which works best when underscoring triumph or tragedy. That really wouldn’t work with a scene this intimate. So, I crafted the Agents Theme to play here and in subsequent scenes in future episodes where our main characters are deepening their relationships. (You will hear it again soon!) 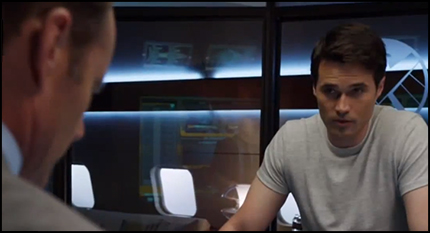 The melody is stated first in the acoustic and electric guitars (guitarist Steve Bartek returns to the score once again from last week). The tune is a gentle waltz, and is comprised of a simple harmonic structure of E, D, A followed by E, D, F#m.  After all the swirling, modulating symphonic textures of the action cues and dramatic scenes, the producers and I felt it was necessary to bring the harmonic and melodic activity to a simpler level for this cue, to underline the emotional bonds forming here. My writing here just needed to be a bit more accessible and less grandiose, but it still needed to pack an emotional punch.

The scene was long enough that it allowed me develop the idea into a secondary B-Theme:

The cue unfolds essentially like a pop-song, with a simple A-B-A-A structure. The first time we hear the theme, it is in a simple guitar arrangement. By the end, the full orchestra has taken over the arrangement with a soaring string line, as they watch the rocket climb into the stratosphere. 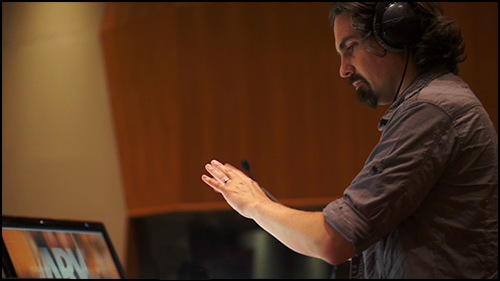 Scoring “0-8-4” is when the reality of how cool my job is finally sank in. I distinctly remember the exhilaration I felt when I first heard the opening notes of Danny Elfman’s “Spider-Man” score against the iconic red Marvel logo. At that moment, it became my dream to one day compose my own opening tones for this logo. Now I finally have that chance… every week for the entire season!

“0-8-4” pushed me to kick my writing up a notch. The symphonic sounds of the orchestra have become decidedly more lush and sweeping, while the expanded synthesizer basses, tribal percussion, jangly guitars and ethnic woodwinds give it a unique modern edge.  These are techniques I push further in next week’s episode, for which I wrote one of the biggest action cues I’ve ever composed!  And you will also hear new character themes next week.  So, check back here at my blog next Tuesday for more.

Thanks for reading along and for joining me on this insane journey!