Tonight’s video blog takes us to the first recording session for my symphonic score to “Marvel’s Agents of S.H.I.E.L.D.”

The Marvel cinematic universe is one of the most ambitious and successful superhero franchises in the modern era, having leapt off the comic book page and into cinemas with 2008’s “Iron Man” and subsequently changing the cinematic landscape with Joss Whedon’s franchise-culminating 2012 hit “The Avengers.”  Now, the franchise extends to the small screen with a new dramatic series, “Marvel’s Agents of S.H.I.E.L.D.” and I am incredibly fortunate to have the chance to bring my own unique sound to the franchise. 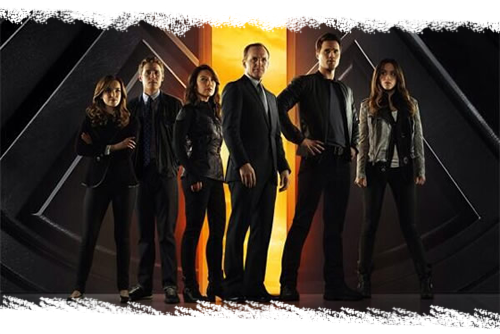 I’ve always adored superheroes and their musical fanfares.  My scores for “Human Target” and “The Cape” were love-letters to the genre, but they were written without the pressure of adhering to well-known franchises – fan expectations were relatively low. “S.H.I.E.L.D.” is different. The comic books date back to the 1960’s, and protagonist Agent Coulson has been featured prominently in every Marvel film since “Iron Man.”  I knew going in that fans of the comics and films would bring their own experiences and associations to this series, and that the score would have to satisfy them and newcomers alike.

Joss Whedon and producers Jed Whedon, Maurissa Tancharoen, Jeff Bell and Jeph Loeb were extremely supportive when I first came on board, offering concise ideas while being open to new ones.  Working together, I believe we found a sound for “Agents of S.H.I.E.L.D.” that is both familiar and new. I strove to write a score that can sit alongside its super-heroic theatrical counterparts in grandeur and scope, while still acknowledging that these particular heroes aren’t actually “super.” 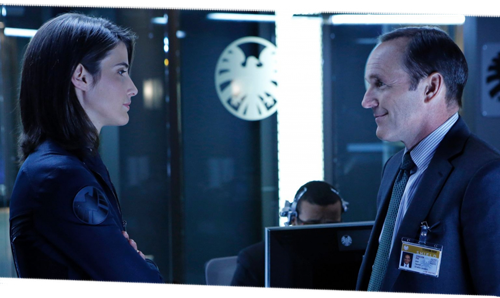 NO SPOILERS FOR A WHILE: The single most important step in any new project for me is coming up with the Main Theme.  If done correctly, a good theme contains the DNA for the entire score and answers all the questions of tone, instrumentation and character from the outset.  Tonight’s premiere episode features a number of themes, but none as important as the Main Theme:

My first draft of this score featured the Main Theme in F major, giving it a very triumphant sound.  There was only one moment in the entire pilot where I diminished the melody into F minor (Coulson’s speech to Mike at the end). Producer Jed Whedon astutely pointed out that the minor version was more satisfying than the major version and suggested tweaking the theme permanently into minor.  To make this adjustment, I had to go back through the entire score and lower a note by a half-step across dozens of various statements of the theme.  Nevertheless, Jed’s idea worked beautifully.  The minor mode version instantly captured the tone of the series in a way that I can’t even quite articulate in words. Now, all the versions in the pilot are in minor mode except one which is back in major, heard when we first see “the bus.” 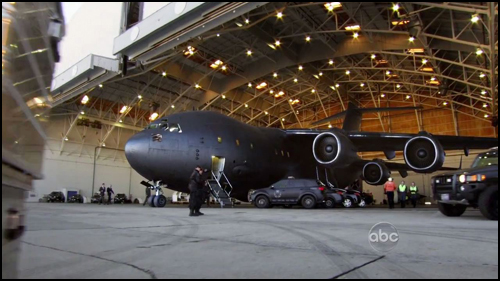 The Main Theme is powered by an energetic harmonic pattern, usually orchestrated in the low strings, called the Main Ostinato:

A motor like this is a useful tool for creating a hook that doesn’t draw as much attention to itself as a full-blown melody.  I use this catchy little riff to build up steam before sweeping statements of the Main Theme. My hope is that audiences will subconsciously pick up on this pattern, as the series progresses (if not by the end of the first episode alone) and start getting excited for big thematic moments before they occur.

The Main Theme and Main Ostinato serve as the creative backbone for the entire score. It functions as our Hero Theme, and frequently as the Coulson Theme.  Rest assured, there will be future character themes in future episodes, as we learn more about the individual members of the team. 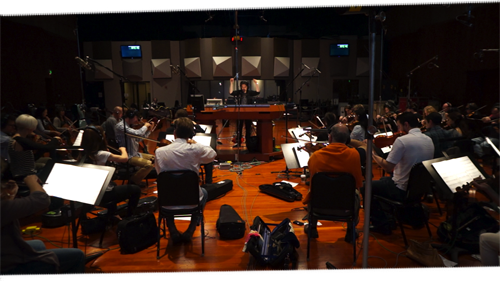 Still, the Main Theme alone would not be enough to build the pilot score.  I knew I needed a few other thematic building blocks.

OK, SOME PILOT SPOILERS AHEAD: The pilot episode centers around Coulson and his new team tracking down a rogue superhero, a down-trodden everyman named Mike Peterson.  For his scenes, I wrote the Mike Theme:

The most common version of this theme is performed on solo electric guitar by Oingo Boingo guitarist Steve Bartek (who has played on many of my scores).  The intimacy of a solo electric guitar plays an important counterpoint against the huge symphonic orchestra.  The image of a single guitar player trying to hold his own against a 90-piece orchestra is a nice metaphor for how Mike must feel, trying to do right by his son in a world where every bureaucracy and institution tells him he’s a failure. 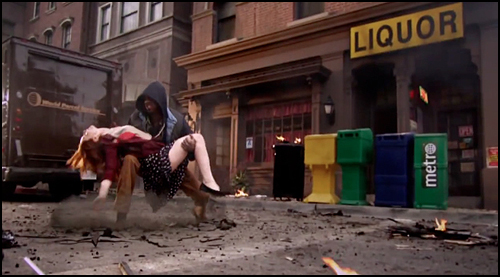 The first time we hear the theme is after Mike rescues Debbie from the burning building.  It’s clean, with no distortion, set against an angelic harmonic bed of violins and violas.  This is Mike at his most pure.

Throughout the episode Mike becomes more unstable, both mentally and physically.  As he falls apart, the clean tones of Bartek’s electric guitar solos slowly become consumed by distorted synthesizers and low brass.  The guitar itself gains distortion, a nice metaphor for Mike losing his spirit to the evil within him. 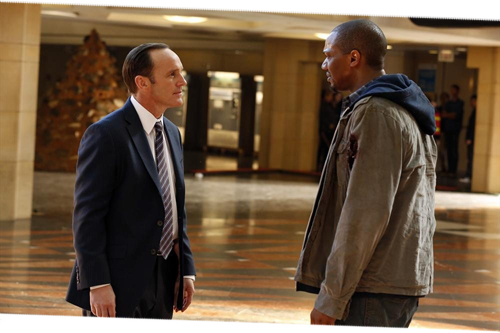 Finally, at the pilot’s climax, Coulson talks Mike down.  Here, the two primary themes of the episode are woven together.  A solo French horn offers the Main Theme as Coulson makes his case, and after Mike is successfully subdued, his theme returns in the clean electric guitar.  All the distortion, low brass and synthesizers have been washed away, suggesting Mike has been washed clean of the Extremis in his veins.

Speaking of which, the other primary theme I composed for the pilot episode is the Centipede Theme, named for the mysterious group that manufactured the device on Mike’s arm:

To imply the centipede-nature of the theme, I used ten notes, divided into two groups of 5.  Played on delicate bells and de-tuned piano, the percussive nature of the notes evokes two rows of tiny insect feet crawling across a string.  (To really be literal, I should have made it a 100-note theme, but somehow I think it wouldn’t be quite as catchy.) 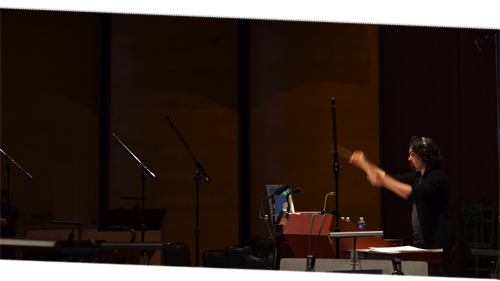 There are so many other fun moments in this pilot score. After the title card, when we cut to France, listen for me playing a Parisian solo accordion lick against the driving action cue.  Somehow, I just knew I had to play accordion on the first episode “Agents of S.H.I.E.L.D.”

Looking back on this first episode, I think it is some of my most ambitious scoring to date. I’m striving to write truly orchestral music, where instrumental families are carefully layered and orchestrated.  However, these intricate symphonic layers are intertwined with complex synthesizer programming, giving the score a modern edge.  This process can add hours of detail-oriented work to every cue!  To work both of these techniques into a single score, on a television schedule no less, is pure madness.  But, I’m not known for backing down from an artistic challenge. 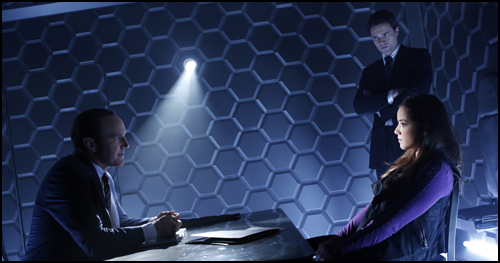 Collaborating with Marvel, Joss Whedon and his creative team is truly a dream come true.  And together, we’ve crafted a score that I hope measures up to the insanely high standards of Marvel fans around the world.  What you have heard tonight is only the beginning.  I believe the score in these upcoming episodes just gets better and better.

I will blog as often as I can, and keep you guys up-to-date with news, especially regarding a potential “S.H.I.E.L.D.” soundtrack album release. I was truly overwhelmed by the outpouring of enthusiasm from fans tonight, both about the episode and the score in particular. As always, thank you all for listening and reading. Remember to keep up with me this fall on Facebook, YouTube and Twitter for more exciting info about “Agents of S.H.I.E.L.D.,” “The Walking Dead” and more.