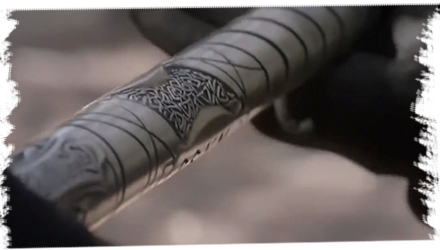 While every episode of “Agents of S.H.I.E.L.D.” has made reference to the Marvel cinematic universe, tonight’s “The Well” is the first to directly pick up directly after the events of one of the theatrical films. In the episode, the team must stop a rogue group of anarchists who have discovered ancient Asgardian artifacts that give their holder superhuman strength and virtually uncontrollable rage. Peter MacNicol, one of my favorite character actors, makes a memorable guest appearance. (I geeked out because I finally got to write sweeping orchestral music for the lead actor from “Dragonslayer,” a movie that was a huge influence on me growing up.) 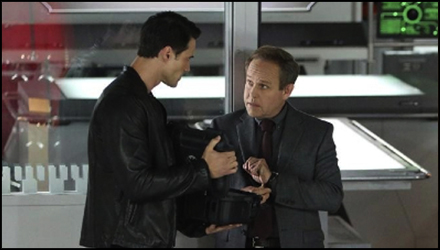 MINOR SPOILERS AHEAD: “The Well” is truly a stand-alone story that does not feature any characters or cast members from the film “Thor: The Dark World.” The narrative focuses more on the magical staff’s influence over our characters, Ward and May, than on Asgard itself, thus rooting the story firmly in our world. As such, I felt no pressure from either the producers or myself to incorporate musical material from the “Thor” films into my score.

“The Well” introduces a new tone to “Agents of S.H.I.E.L.D.,” one that embraces Marvel’s fantasy roots. I knew I would need a new musical theme to represent the legendary Asgardian warrior whose myth provides the foundation of the story. For this, I composed my Asgard Theme:

I wanted my Asgardian Theme to feel like an old fanfare, a melody that captured the majesty of Asgardian nobility. However, the episode is firmly rooted in reality. The legend of the missing Asgardian warrior is recounted to us by MacNicol’s Professor Elliot Randolph. So, there was little room to justify soaring brass. So, I began my process by writing a piece of music that was purely for my inspiration. I wrote a brief triumphant fanfare version of the Asgard Theme, just so I could internalize the material. I needed to write the big version before I could tackle a smaller version. 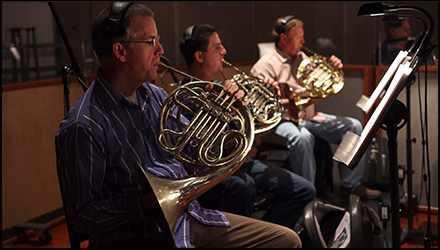 For the various dialog scenes with MacNicol, I took the essence of my epic Asgard Theme and thinned it out to subtle wisps. English horn, bassoon, or evocative cello lines quote the theme in mysterious settings. You’ll hear the melody at least a dozen times throughout the episode but, ultimately, the big arrangement of the Asgard Theme never makes an appearance. However, the subtle versions of it you do hear imply a broader musical mythology under the surface.  And who knows… if we ever get to put out a soundtrack album, perhaps the big fanfare version will end up there. 😉 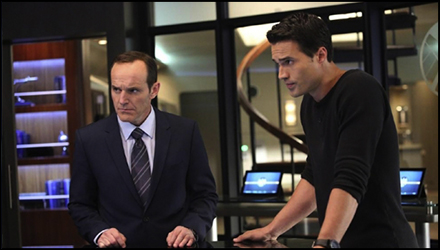 There are a few other thematic ideas that are introduced in this episode. The anarchists are underscored with a snarling distorted synth bass, oscillating in minor thirds. The heavy distortion serves as a musical metaphor for how their minds are altered when they touch the staff and absorb the Asgardian rage.

“The Well” takes its title from the series of flashbacks that Ward experiences when he touches the staff. For these sequences, I introduced a recurring cluster of pitches that rings disturbingly hollow. The sound is not urgently scary, nor is it sad. It leaves the audience alone to interpret the images on screen. In that sense, this “Ward Chord” is not really a theme per se, but it does function thematically because it recurs with each flashback, and increases tension each time. 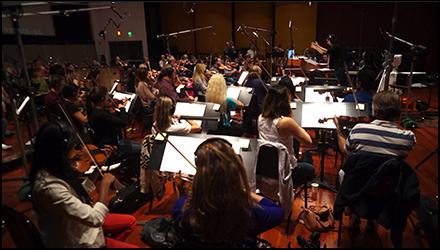 Even though I got to play around with Asgardian mythology, and score a hell of an action scene in the final act, perhaps my favorite cue is at the end of the episode. Ward sits at a hotel bar with Skye and she makes her intentions pretty clear. The orchestra swells with emotion, as Steve Bartek’s haunting electric guitar enters with warm chords. (I’m practically lighting romantic candles for these two.) I played the moment romantically as misdirection, because Ward ultimately rejects her advance and goes upstairs alone. There, in the hallway, he sees May leave her hotel room door open for him.

Here, the score isn’t romantic at all. Instead, it plays almost as an emotional suspense cue (not in a ‘scary’ way, more in a ‘what’s he gonna do?’ kind of way). Airy, con sord (muted) string chords sustain unresolved chords as he ponders his options. Finally, as he enters her room and closes the door behind him, the strings resolve and end on a warm note. 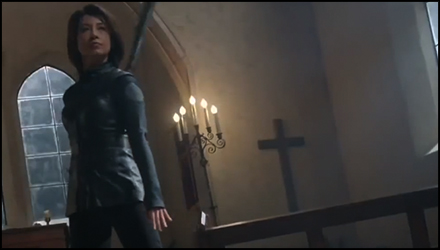 “The Well” is another strong episode that reveals more about our primary characters and ratchets up the tension between them. I had fun stepping into this fantasy toy box and playing around with a more expansive musical language. Next week’s episode allowed for even more musical genre-hopping. With the Thanksgiving holiday sneaking up on me, I may not have a chance to write a full blog entry for it, but definitely tune in and check it out. It’s one of the scariest scores I’ve written this side of “The Walking Dead!”

PS: For this episode, I collaborated with director Jonathan Frakes! How cool is that? #MakeItSo #Engage 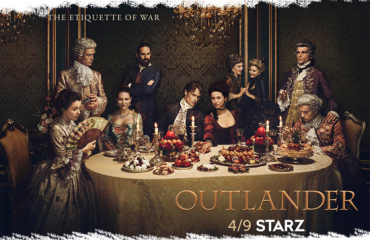 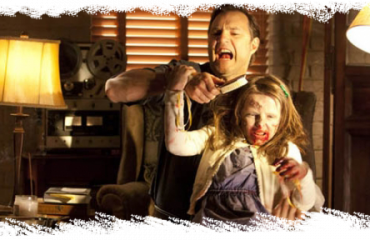