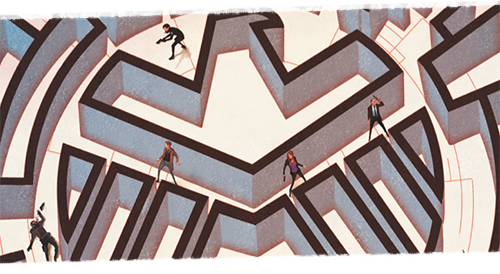 Last night’s episode of Marvel’s Agents of S.H.I.E.L.D. directly ties in with the storyline of Captain America: The Winter Soldier, allowing our series to connect with the Marvel cinematic universe more closely than ever before. All the clues and hints that have been dropped throughout our first season pay off as we finally reveal the identity of the mysterious Clairvoyant. 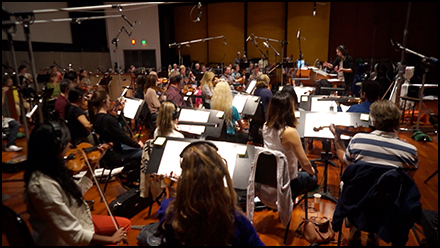 SPOILERS BEYOND: When I first saw this episode I knew it was going to be special.  First of all, it starts off with Bill Paxton flying a supersonic jet, listening to Blue Öyster Cult’s “Don’t Fear the Reaper.”  I’m in.  🙂

I had my work cut out for me for this one. I had introduced a number of important character themes throughout the season and it was clear I would need nearly all of them to score “Turn, Turn, Turn.” The episode lives up to its name: the narrative twists and turns, with a shocking revelation in every act, leading up to the one we’ve been waiting for: the reveal of the Clairvoyant, and that’s not even the most surprising twist in the episode!

The producers and I had long discussions about how music could help guide the audience’s experience. In some cases, the score had to deceive them, to help a misdirect feel plausible for as long as the audience needed to believe it, until a greater truth was eventually revealed.

I knew that using my character themes would make this possible, because they bring the audience’s memories from the entire season to the scenes.  So, let’s discuss the themes and how they were used in this crazy episode.

The Coulson Theme, or Main Theme, is still the heroic backbone of the score.  In this episode, however, Coulson is vulnerable.  He knows he has been betrayed by May, and is struggling to piece together the mystery.  So, his theme is most often heard in subtle statements.  There are no “hero moments” for Coulson in this episode, he’s on the ropes. 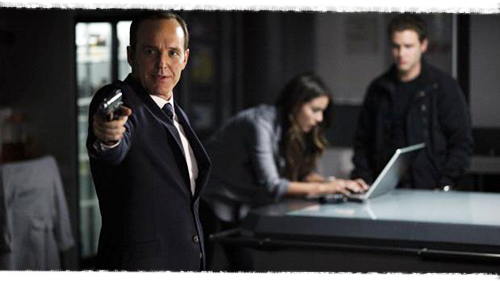 Listen for the Coulson Theme woven throughout his dialog scenes with Garrett, often played by a solo French horn. 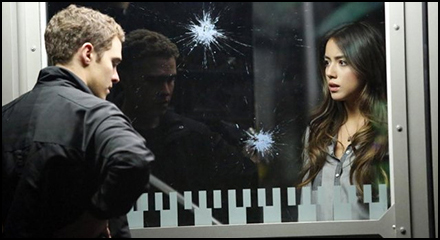 This is a melody that I’ve used for Skye throughout the entire season. Though it plays an understated role in “Turn, Turn, Turn” it serves an important function. She shares a handful of scenes with Ward that imply the chemistry between them is beginning to heat up. Because the Skye Theme has an emotional quality, I leaned into it for these moments to create the feeling that their romantic bond is about to about to renew. Of course, there are other things in store for their relationship, but I did everything I could to prevent the audience from suspecting that. 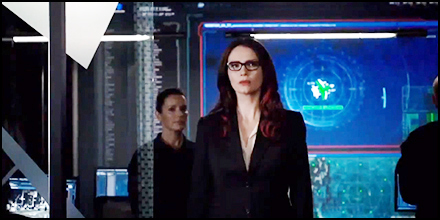 First introduced in the episode “The Hub,” this theme represents the sprawling and intimidating S.H.I.E.L.D. bureaucracy. The Coulson Theme connects to our heroes and their adventures, to those specific agents of S.H.I.E.L.D. that are our protagonists. This theme contrasts the main theme by representing S.H.I.E.L.D. as a larger entity. In the intervening episodes, it also came to represent Victoria Hand, who personified the organization with her cold, calculating leadership.

For the first two-thirds of the episode, Coulson and the audience believe that S.H.I.E.L.D. has been completely overtaken by Hydra (the evil organization first introduced in Captain America: The First Avenger) and that Victoria Hand, herself, is the Clairvoyant.  Neither of these turn out to be true. Hydra is defeated by S.H.I.E.L.D. loyalists who are led by Victoria Hand. Until that is revealed, however, the role of the music is to draw the audience’s attention to Victoria Hand as much as possible, to misdirect them into believing she is the Clairvoyant. 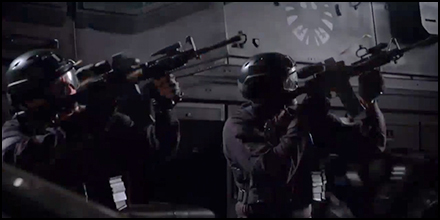 I loved this musical opportunity for a little in-joke, and actor Clark Gregg’s straight-faced delivery was pitch perfect. There was only problem: I couldn’t actually use the real Hydra Theme Song for this joke! At this point in the episode, we are supposed to believe that Victoria Hand is the Clairvoyant and a member of Hydra, so I had to use her theme for this moment. If I used the theme that will eventually become the real Hydra Theme, it would have revealed the true identity of the Clairvoyant too early! 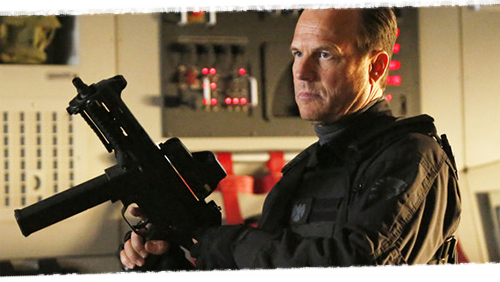 I introduced this theme for Bill Paxton’s John Garrett in the episode “T.A.H.I.T.I.” In that episode, he’s cocky, confident and has a more militaristic energy than Coulson.

The Garrett Theme is built in two parts.  First, there’s the Garrett Ostinato:

This is usually played in the celli, basses and low woodwinds.  Then, there’s the melodic Garrett Theme:

The theme is represents his adventurous personality, designed to be fun, bouncy and as far away from ominous as possible.  Why?  Because, in last night’s episode, John Garrett is revealed to be the Clairvoyant! More on his theme in a moment.

The Centipede Theme
aka The Clairvoyant Theme

In the pilot episode, I introduced a creepy ten note theme based on a minor and then diminished scale for the mysterious group Centipede.  This was called the Centipede Theme:

Eventually, as we learned that the program was actually run by a mysterious figure named the Clairvoyant, I adapted that theme to become the Clairvoyant Theme.  This dual function was perfect, because every time someone talked about the Clairvoyant, those creepy five-note scales would take us back to the first episode and remind us how this whole thing started.

Once Garrett is revealed to be the Clairvoyant, I had a bit of a thematic mess on my hands. The Clairvoyant Theme and the Garrett Theme are completely musically dissimilar, and are now representing the same person! Complicating matters, up to this point in the episode, every mention of Hydra was being accompanied by quotations of the Big S.H.I.E.L.D. (or Victoria Hand) Theme, because she was the target of Coulson’s suspicions. From the moment Garrett admits he is loyal to Hydra I had to make sense of these themes and redefine the musical rules moving forward. 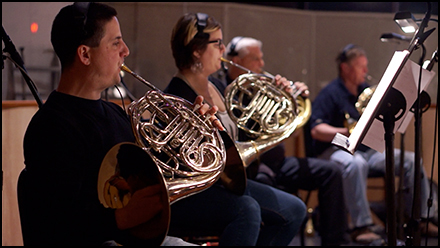 Starting with the fifth act of “Turn, Turn, Turn” and moving forward to the end of the season, you will hear these themes function in new ways.

The Big S.H.I.E.L.D. Theme is restored to how it was used originally: to represent a big organization, but not to imply that it is evil. Victoria Hand’s redemption is brief, as she doesn’t survive to the end of the episode, so the musical arc of this theme is essentially complete.  S.H.I.E.L.D. itself as an organization is essentially destroyed in Captain America: The Winter Soldier. While this theme may appear again, and I’m glad I have it for the future, it is essentially retired.

The Garrett Theme and the Clairvoyant Theme now take on new meanings. Those creepy five-note scales that began with Centipede, then the Clairvoyant, have now evolved to become the new Hydra Theme. I like this approach because it helps underline the unity in the episodes leading up to this point.  On a second viewing of the pilot, fans will know that Mike Peterson is actually part of a Hydra program, and the score will underline that. 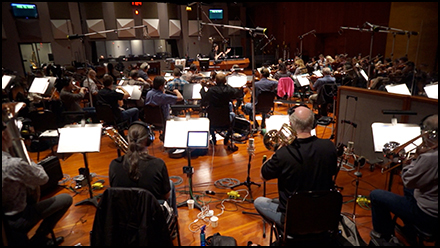 And what of that bouncy, militaristic Garrett Theme? It still represents John Garrett, just as a character, not as a larger faction. It will be heard in coming episodes in scenes that pertain directly to him. Paxton’s performance after being revealed as the Clairvoyant is even more fun and energetic. So, his theme still fits him perfectly, it just shows us a different side of his personality.

Listen to the score during his big scenes in the last act of “Turn, Turn, Turn” and you will hear how his theme has been slowed down into long, ominous swelling statements. All of his scenes moving forward will feature this variation of his theme.

At the end of Act Five, Coulson and May defeat Garrett and his forces and the Hydra take-over of The Hub is thwarted. My personal favorite scene in the episode is the aftermath of the whole affair, as Garrett and the other conspirators are led through the halls. Series Creator / Writer / Producer Jed Whedon conceived this scene from the beginning to be in an elegant, slow-motion style without dialog. We see the frustration and anger from Tripp, Ward and our heroes and are not bogged down by the particulars of what they’re actually saying. We just feel it. This unique scene is scored with a new melody, a simple piece for guitar and rhythm section that sums up our feelings after this crazy journey:

I’m not sure we’re going to hear this melody again, so I haven’t even bothered to give it a name. It works so well in this singular moment. If it comes back thematically in a future episode, I’m open to suggestions for what to call it.

There’s one more twist to discuss. Given the chance to kill Garrett, Ward instead shows his true loyalty and kills Victoria Hand and the other S.H.I.E.L.D. agents in the plane: Ward is an agent of Hydra. The final two scenes in the episode are underscored with nothing more than deep, horrifying synth tones. The producers and I didn’t want to clutter these scenes with themes, melodies or emotions. We just wanted to emphasize the pure shock, and leave the audience feeling dazed at this final unexpected turn. 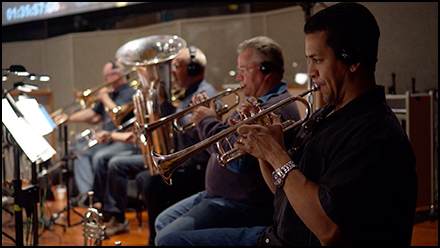 The events set in motion in “Turn, Turn, Turn” will continue to have huge ramifications for the rest of the season. Musically, my themes are now fully defined. You will hear these themes, along with many others, developing in exciting ways as we go into the home stretch for the first season of Marvel’s Agents of S.H.I.E.L.D.

Thanks for reading!  See you guys for the next one…