This was a tricky episode. It centers on Adama as he remembers (and “speaks with”) his ex-wife, Carolanne, on their anniversary. This plot makes way for Tyrol and Cally’s life-threatening situation in an airlock. The challenge was to integrate the stories together, since they are related: Adama’s guilt about his own family is magnified when he sees the loyalty and love between Cally and Tyrol. 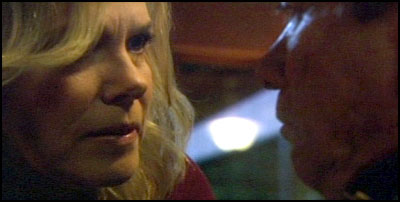 We’ve never gotten a good look at Carolanne before (her only previous appearance was in an Act of Contrition funeral flashback, sobbing behind a veil… it wasn’t even the same actress), but I wanted it to seem like her spirit had always been present, on the back of Adama’s mind. If I wrote a brand new theme from scratch, it would feel jarring and awkward, as if this were some random character being forced into the story. Instead, I incorporated Richard Gibbs’ theme from the 2003 miniseries:

This simple theme (essentially a mixolydian scale) has been heard once or twice on the new series, but it never really fit in with the dark aesthetic of the show. However, it’s longing and warm tone fit this episode perfectly. It would also be distantly familiar to all the fans, and help unite Carolanne with the series. This was music we haven’t heard for several years, being used as Adama thinks back about a woman he hasn’t seen for years. 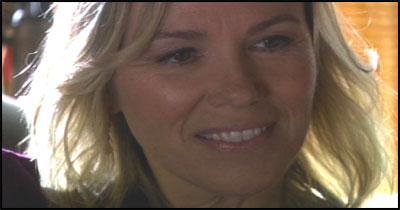 I also used a very simple musical device to create the impression that Carolanne is more present in Adama’s mind than the cameras can convey. I created a transitional motive with claves and wood sticks, an accelerating and then decelerating pattern that was used to introduce her flashbacks:

(A quick contemporary music lesson: This technique is called “Feathered Beaming.” It’s used to imply changes in speed, without being rhythmically precise. I also used this rhythmic effect in “Fragged” as well as the film “Rest Stop.”)

Once this unique sound and rhythmic pattern had been established for Carolanne, I could then use it in scenes where we don’t actually see her face, to imply that Adama is still thinking about her. For example, we hear it echoing in the distance as Adama watches Cally and Tyrol embrace in the airlock.

Essentially, the entire score to A Day in the Life was built from Gibbs’ 2003 miniseries theme and the Tyrol / Cally Love Theme (click here for musical details), with the “Carolanne” claves rhythm providing transitions and accents.

Next week’s episode, Dirty Hands, has a fun original theme featuring dobro and electric bass. And I just today finished composing the last cue for Maelstrom. That episode is going to blow you guys away!