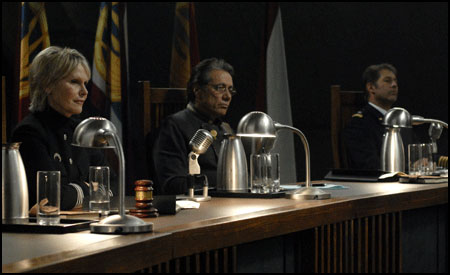 The last three episodes function as a trilogy, however the first two installments are more important for what they set up, rather than what actually happens. Regardless, this week’s “Crossroads, Pt. I” still had plenty of exciting musical opportunities. The long-awaited trial of Gaius Baltar finally begins, but rather than focusing entirely on legal proceedings, we are given fascinating glimpses into the lives of various characters, including Laura Roslin, Col. Tigh and Tory.

Early cuts of the courtroom sequences were tried with temp scores, but the editors and director Michael Rymer ultimately decided that the drama functioned better without the added weight of musical scoring. This gives the scenes a stark, realistic quality and allows the excellent performances to convey the story on their own. 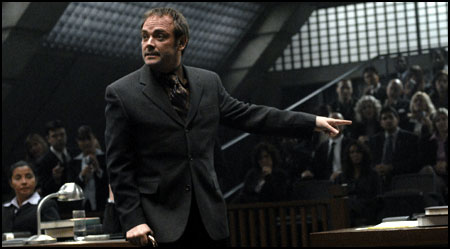 Since the majority of the show consists of these trial scenes, “Crossroads, Pt. I” ranks among the shortest scores of any episode I’ve done. But, that certainly doesn’t mean I had the week off! Instead, I focused my attention on the brief, but powerful, scenes set outside the courtroom. 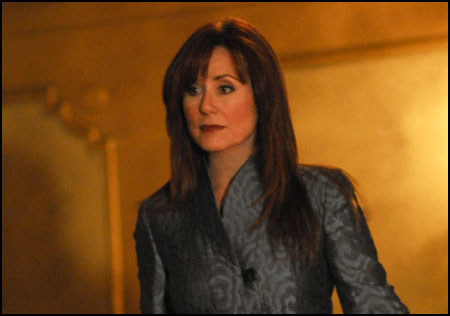 For Laura Roslin’s dream of Hera in the Opera House, we chose to bombard the viewer with a chaotic choir singing angular clusters. Wailing electric violin and dissonant synthesizers were also tucked into the texture. Extremely astute listeners might even recognize that the hollow drone from Roslin’s dream of Leoben in Season One’s “Flesh and Bone” begins the scene, though it is quickly enveloped by the vocals.

I wouldn’t call this unique vocal texture a theme by any definition. Nevertheless, it will return and develop throughout the season finale next week, eventually fusing with a memorable theme from season one.

And, of course, I also spent a great deal of time with another mysterious piece of music. This strange musical texture weaves its way throughout the episode, being heard by some characters and ignored by others. Is it real, or is it in their minds? What does it mean? …