Tonight’s episode is the last of the year, before we take a break for a few weeks. It’s been a great run so far, but the second half of the season will be on a slightly more relaxed schedule — more like “Season 2 Stress” — a welcome change from the incredibly tense first months of Season 3.

In this episode, Chief Tyrol discovers a holy temple on the surface of the algae planet. The music cue for this particular moment was especially challenging.

First, we had to lure Tyrol into the temple and this called for haunting, almost subliminal, chimes and bells that he thinks he hears. Using glass harmonica, glass marimba, vibraphone, tines, celeste, tibetan bowls and anything else we could get our hands on, we created an intricate, layered chime effect. 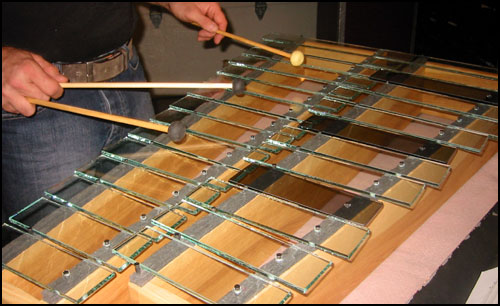 My engineer / co-producer Steve Kaplan mixed these bells swirling all around the surround channels… more than we had ever used the surrounds before, which is saying a lot! But, it was actually quite effective at creating an ambient, atmospheric mood. You’ll probably notice it more on DVD playing through a good surround sound system.

But this was only half the challenge! Once Tyrol arrives at the temple, I had to do something to match the majesty and awe of THIS shot:

The Eye of Jupiter ties back in with the Kobol / Earth / Thirteenth Colony story arc that has been a through line since the miniseries. It seemed fitting to bring back the Kobol / Roslin theme which has represented this story arc so far:

I usually orchestrate this chant-like melody with a solo duduk or solo voice. However, this scene is so awe-inspiring that I felt like the music had to be bigger and more majestic.

I began with the normal Galactica soloists I would use for a cue like this: Chris Bleth on duduk and Raya Yarbrough singing an ethereal vocal line. This marks the third time she has sung this melody, after “Lords of Kobol” from Pegasus and the opening montage of the Season Three premiere. 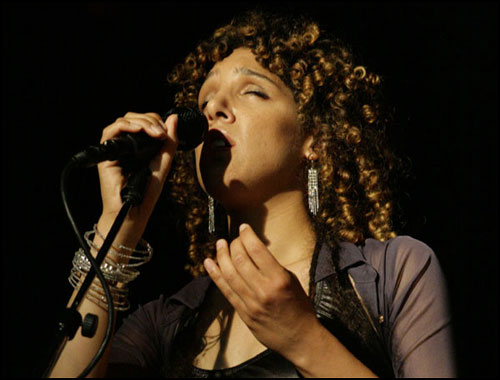 I added to the ensemble a yialli tanbur, zhong hu and gu zheng, each a very unique string instrument that I’ll cover in more detail in a future entry. The resultant sound of all five soloists playing the simple melody in unison was extremely powerful. On top, the ambient chimes and bells from the earlier half of the cue continue. At producer David Eick’s request, I even put in the entire taiko drum ensemble for this shot, adding a driving intense rhythm to the religious, lyrical hymn.

This cue is among the biggest I’ve written for Galactica. But, the Temple of Five plays a major role in the grand scheme of the story and I wanted to give it a proper introduction!

Enjoy the mid-season finale and have a great holiday! I’ll probably update this a few times before we come back on the air, so stop by and check it out. See ya’ in 2007!