On any other television show, it would be hard to believe that a “boxing” episode would be among the most intimate, lyrical, dynamic or emotionally involving stories of the season. As usual, Battlestar Galactica continues to surprise: this week’s episode is all of the above. 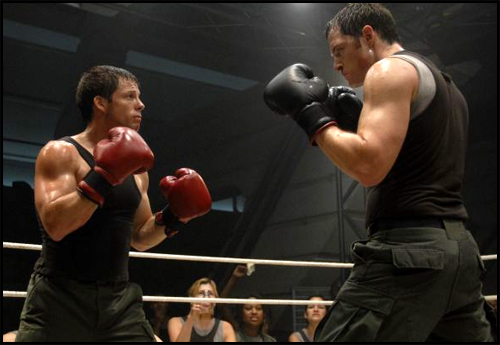 Unfinished Business uses the organized boxing tournaments in the ship’s hangar bays as a narrative device to flashback to the events in the “missing year” on New Caprica, filling in a few gaps between Season Two and Season Three. It focuses on the strained relationship between Lee and Kara, a subplot that has been explored since the miniseries and first season.

At first glance, the lyrical opening montage seems to hark back to the opening sequence of Kobol’s Last Gleaming, Part I where Apollo and Adama were boxing. That connection is certainly there on a visual and musical level. But beyond that, this teaser sets up how unusual this episode is. The delicate balance of music, sound effects, close and wide angle fight shots and flashbacks establish a dream-like and surreal tone. The music also had to be more personal and intimate. For this, we used the string orchestra: 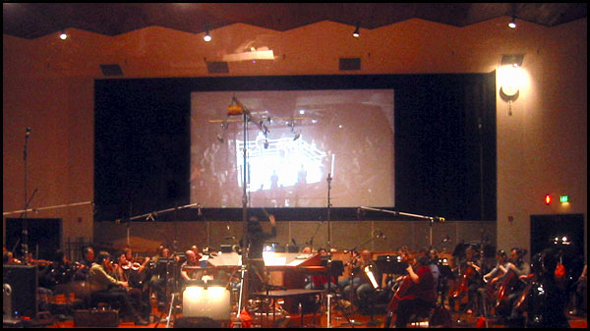 While the majority of my Battlestar Galactica score is done with non-traditional instruments, the classical orchestra is saved for those few occasions where it will have the most powerful, dramatic impact. For Unfinished Business, the lyrical fight sequences were actually edited to previous string orchestra works I had written for Galactica (editor Michael O’Halloran should take a bow here, he spent a lot of time with Ron Moore cutting this one to my music and making these sequences work).

The spirit of the “temp” score worked very well, giving the show an intimate and personal touch. However, I was torn over the choice of thematic material. I’ve written several themes for Starbuck and Apollo individually, for various dramatic needs, but none of them seemed to fit this episode. What we needed was a Starbuck-Apollo-Love-Theme, and for all the tension between them over the years, this had never come up before.

So, I finally had the chance to write one for them! This tune is heard throughout the entire show (I’ll go over it in detail in a forthcoming Themes of Battlestar Galactica entry). You’ll also hear the return of other signature themes, including Roslin and Adama and a subtle quotation of The Shape of Things to Come in the final act. 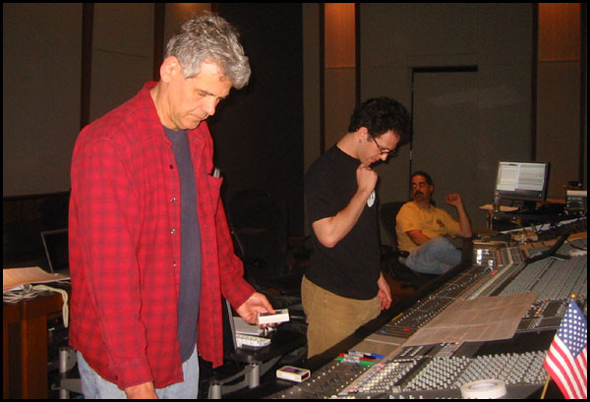 Unfinished Business also afforded me another unique opportunity. About eight months ago, before I had written a note of music for the third season, I got a phone call on a Friday afternoon. They told me that they were shooting a party sequence for this episode where people would be dancing to Irish-inspired folk music. They asked if I could write something for the scene. Unfortunately, they were shooting at 8am on the following Monday!

I quickly sketched a little jig and got “the guys” together to record it. I turned it in with a few hours to spare and they played it back on set. Even though we made some subtle tweaks to it during the scoring sessions, what you hear in this episode remains basically the same piece I wrote last spring: technically, the first piece of music scored for Season 3! 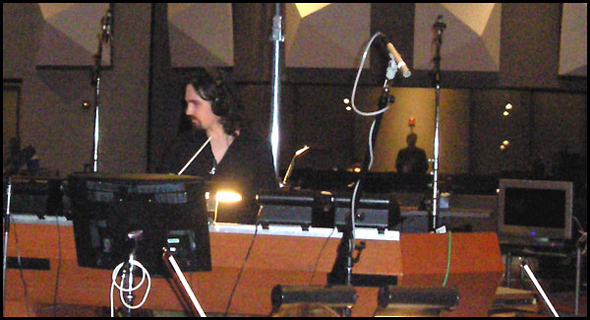 Bear at the podium, conducting the orchestra

Unfinished Business was among the biggest challenges for me in the entire series. In addition to the sweeping, lyrical orchestra pieces and break-neck paced Irish jigs, I also had to compose the usual onslaught of taikos and ethnic soloists (listen for a particularly cool theme as Adama and Tyrol fight). But, where there are challenges there are rewards, and this episode was worth all the sleepless nights.

I hope you guys enjoy watching this one as much as we all did creating it.