With each passing album I lavish more and more attention to getting every mix (every single note) perfect and this was no exception. I know I’m biased, but I have to say that this record truly kicks ass. I think it will be the best of the new Galactica albums. All the outstanding cues from the third season made the cut, including the bombastic battle pieces from Exodus II, the haunting solo piano from the basestar and, of course, my version of All Along the Watchtower. I’ll be releasing the official track list here very soon.

The record will be out in October from La La Land Records, and we will definitely be doing a BATTLESTAR GALACTICA LIVE CONCERT in Los Angeles to celebrate the release! We did this last year and it was a big success, so if you missed it, here’s your chance to check it out. The score is exciting in the context of the show, but there’s nothing like being able to experience the music live and in the flesh, performed by the incredible musicians who work on the series every week. Also, the Boingo boys, Bt4 and I will be doing another series of Oingo-Boingo-inspired concerts for Halloween, in Orange County and Los Angeles. More details for both shows will be posted soon.

But, I’ve also got another CD coming out! La La Land will also be releasing my score to Wrong Turn 2. This is a sick and twisted little movie starring Henry Rollins that comes out on DVD for Halloween.

The director really let me cut loose on this one and I think you’ll hear how much fun I had with it. And I know all BG fans will love it. Many of the same musicians contribute some incredible performances to the WT2 album including Paul Cartwright (electric fiddle) and Oingo Boingo alums Steve Bartek (on guitars and banjo) and John Avila (on bass). The film also afforded me the long-awaited opportunity to collaborate with Jonathan Snipes, aka Captain Ahab. He’s an incredible songwriter and performer, with a sharp sense of musical humor. He and I collaborated on a couple songs for the flick that just rule (they’ve been in constant rotation on my own iPod ever since we finished them!). I’ll post more about this record as the September release date approaches, including a track list.

Aside from getting ready for more Battlestar, preparing for the next BG concert, and finishing two records, I’ve also taken on TWO new television series. As of this week, I’m about halfway through scoring the second season of Sci Fi Channel’s hit series Eureka.

If you’ve caught the show, you know it’s totally different than Battlestar in every way. But, it’s been a real treat to work on something that doesn’t need TAIKO DRUMS! And I get to play accordion on just about every cue, which is cool. We recently did a Zorro parody for the 6th episode that might actually be the most fun I’ve ever had writing music in my entire life! La La Land Records will be releasing an album of my Eureka music sometime next year, so if you hear a cue that you really like, let me know. 🙂

But, my most exciting news is that I’ve also begun scoring The Sarah Connor Chronicles, which debuts on Fox in January! 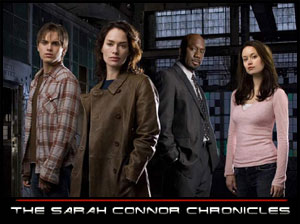 I have to admit that watching the Terminator films as I was growing up contributed a lot to my decision to become a film composer in the first place. So, being able to contribute to the Terminator mythology is like a geek-wet-dream come true! I scored the pilot a few weeks ago and it premiered at Comic Con last weekend. The reception was incredible and I was thrilled that so many fans responded to the score in particular.

Speaking of Comic Con, it was great to see so many of you BG fans out and about in San Diego. Doing the Galactica panel with Richard Hatch was a real thrill. I’m always surprised at how many people out there love not only the show, but the score as well. Comic Con is the only place in the world that a composer for a cable TV show gets flagged down for an autograph in the middle of the street! 🙂 Knowing that you guys are listening in and appreciating the things I’m trying makes the many sleepless nights spent writing music worthwhile.

I’m going to update this as often as I can throughout the fall. I’ll hopefully be able to do an entry for each episode of BG like I did last season. And if enough geeks out there are interested, I’ll try a blog for Sarah Connor as well.

So, I promise it won’t be another 5 months before I update this again! Thanks for listening and reading. See you for Season 4…