As Always, SPOILERS AHEAD: This week’s episode had many great musical moments, but the one I lavished the most time and attention on was Baltar’s conversation with himself in the lunchroom.  This scene was the culmination in a series of bizarre twists and turns going all the way back to the miniseries, and the score had to be fresh and interesting.

In the miniseries, Richard Gibbs scored the Baltar and 6 scenes with a simple gamelan motive that I continued to use throughout their scenes together in the series.  In season 2, when 6 sees a Baltar in her head, I represented the turn of the tables by taking the theme and physically retrograding it, playing samples of it backwards. 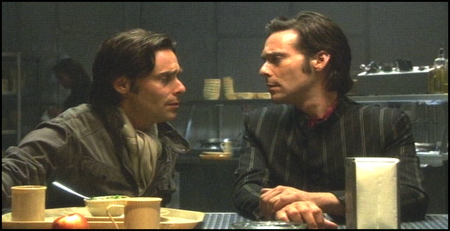 In Six of One, the tables are turned yet again, as Baltar is now speaking to himself!  Playing the original 6 theme, or playing backward elements as I had in Season 2 would seem too familiar now.  I needed to raise the musical stakes here, and help take the scene into trippy, new territory.  So, instead of reversing individual musical elements within the cue… I reversed the entire the cue.  This 3-minute scene is, in fact, a musical palindrome.  It sounds precisely the same whether played forwards or backwards.  Take a look at the wave form, and you can see that it is a mirror image of itself, reflecting across the mid-point marked in red:

Traditionally, retrogrades in concert music are created on paper, a musical line notated forwards and then backwards, but always played in real-time by a performer.  Modern technology makes audio manipulation incredibly easy, so the retrograde in this scene was accomplished digitally, a reversal of the physical sound, not simply a musician playing notes in backwards order.  So, envelopes, dynamics and attacks are all reversed as well, an effect most notable with cymbals, plucked strings and percussion.

Creating a musical palindrome is a relatively simple concept, but doing it to score a dramatic scene is mind-numbingly difficult.  The idea is that the piece is played normally until the half-way point, and then you turn around and play the piece backwards until you get back to the beginning… which is now the ending.  The result is that every event in the first half of the piece, will be present as a retrograde in the second half.  For example, if I were to place a cymbal scrape 30 seconds before the mid-point to represent a sudden shift in mood… a backwards cymbal scrape will sound 30 seconds after the mid-point, whether it fits the scene or not.  So, I had to be extremely careful, making sure that all musical events and their corresponding retrogrades fit both halves of the scene.

The first half of the scene required a tone that was spiritual and morally ambigious, as Baltar discusses music with Tory.  I quoted Baltar’s new spiritual theme, a chordal progression of C#, G7, Bbm and A9.  The yialli tanbur and duduk simultaneously play the notes of Baltar’s original theme in backwards order, making the theme virtually unrecognizable.  However, the theme will be easily identifiable, in order, after we cross the mid-point and are in the digitally retrograded half of the cue. 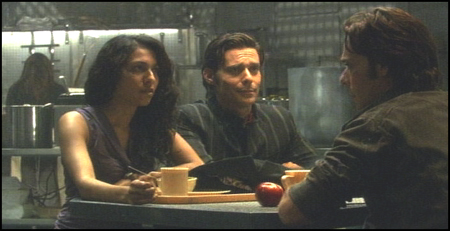 The mid-point of the cue (where the retrograde begins) comes during Galtar’s speech to Tory about music, right around the line “… grotesque, screeching cacophony.”  Shortly thereafter, Tory leaves and Gaius begins to talk to himself, and the drama takes a darker turn.  As a result, the music needed to shift as well.

Since we heard Baltar’s spiritual theme in the beginning, we now hear it in reverse (A9, Bbm, G7 and finally C#).  When played backwards, the chord progression emphasizes the minor chord, and in combination with the odd, reversed sound quality, creates a musical mood that is much more tense… fitting for the second half of the scene.

Physical retrograde (meaning the reversal of recorded sound in a digital or analog format) is a neat trick, but if the second half of the cue suddenly sounded entirely backwards it would be distracting and obnoxious, so I scattered backwards audio samples throughout the first half of the piece.  If audio is backwards in the first half, it will sound normal in the second half, and vice versa.  As a result, the entire cue sounds like a constantly shifting collection of backwards and forwards tones.  The only clue that it is a musical palindrome are the obvious percussion hits and melodic lines that mirror one another.  Watch the scene with this in mind and I think you’ll hear the mid-point where the music shifts and begins to reverse back on itself.

In addition to quirky scenes like that, this final season of Galactica has provided me wonderful opportunity to play with the extensive library of themes I’ve written over the years.  Lee’s scene saying farewell to Kara is a perfect example.

I wanted the score to this scene to somehow sum up their entire rollercoaster relationship, to remind audiences of how much these two have gone through.  As a result, this single cue incorporates nearly every theme ever written for either character.  The music matches the writing and physical staging of the scene, underlining that these two people began the series as very distant rivals, but have come to realize that they share a unique bond.  To illustrate this point with the score, I underscored each character’s individual lines with their unique themes, and brought them together with their shared Love Theme.

The scene begins with Lee telling Kara about his new job.  The score enters with a solo duduk stating his theme. 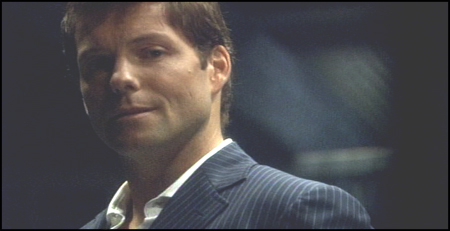 As Kara stands to shake his hand, the bansuri states her theme, this time with unusually lush and warm harmonies, representing the conflicting emotions just beneath the surface of her casual demeanor. 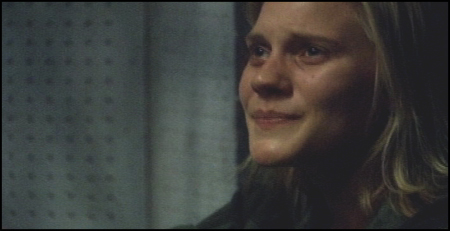 As Lee turns to leave, a solo fiddle plays the A-Section of their love theme, at first hesitant and restrained.  As they kiss, the minor-tinted B-Section enters and the arrangement builds, adding lower strings and percussion. 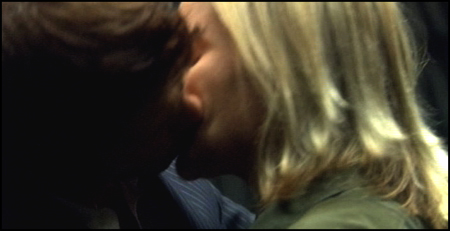 Lastly, the solo fiddle returns with the A-Section as Lee whispers that he is a believer.  This marks the first complete statement of the Lee and Kara Love Theme since Unfinished Business.

The other scene that I really enjoyed scoring is when Apollo leaves his military life behind and his friends come out to salute him.  The return of Wander My Friends, the Celtic-inspired Adama / Miltary theme, was an obvious choice for this touching moment. 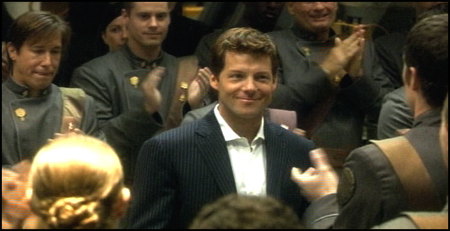 This theme has appeared in every season of Galactica, performed by Eric Rigler, usually on Uilleann pipes, which are Irish in origin.  The Uilleann pipes are incredibly expressive and lyrical, but I feared they might overpower this particular scene.  I wanted a more restrained and intimate instrument, that was still in the bagpipe family.  For season 4, Eric brought his small Scottish pipes.

These pipes produce a thinner, darker tone.  Unlike the Uilleann pipes, the small Scottish pipes haven’t been used in many feature film or television scores, so the sound is a little more foreign to audiences.  But, it was exactly what I was looking for.  The intimacy of the instrument created a moving, yet unsentimental atmosphere as Lee says goodbye to his shipmates.  The small Scottish pipes begin the solo statement of Wander My Friends as Lee first enters the hangar.  The Irish whistles join in and, when the applause begins, the entire band finally kicks in, creating what is probably the most energetic arrangement yet of this tune.  It seems that each season provides a perfect opportunity to use this theme and I’m very glad that Season 4 was no exception.

I recently combined this cue with Season 3’s Admiral and Commander and Season 1’s Wander My Friends to make what I consider to be the definitive arrangement of this theme.  And we’re premiering this new arrangement at Sunday and Tuesday’s upcoming Music of Battlestar Galactica concerts, with Eric Rigler as a special guest.  (Speaking of the concerts, a handful of tickets are still available for the second night but they’re almost gone.)  Hope to see you this weekend! 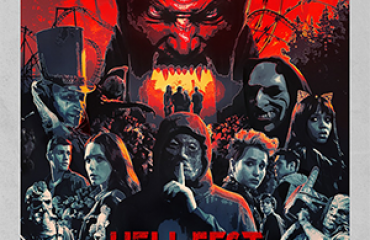 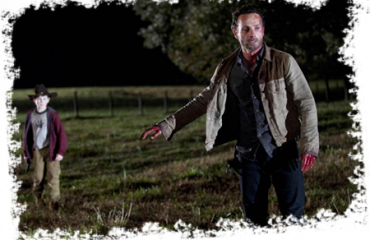 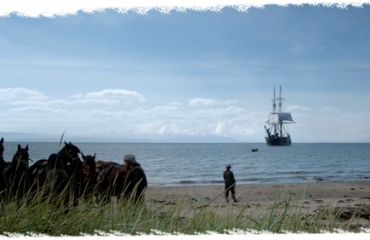