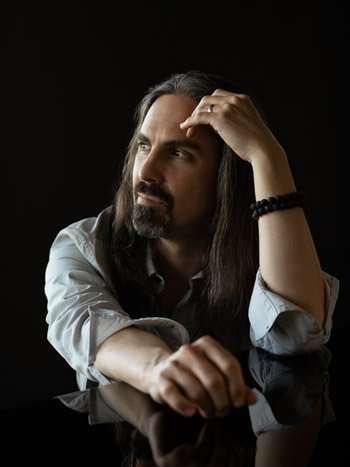 In the sleepy port town of Bellingham, Washington, sixteen-year-old aspiring composer Bear McCreary imagined and wrote his own films, just so he could score them. A chance encounter led him to film music legend Elmer Bernstein, who moored his boat in Bellingham harbor. The maestro recognized a passion for musical storytelling in the ambitious high school student, and encouraged him to study composition at the USC School of Music in Los Angeles, where he took him on as a protégé. Two decades later, McCreary has validated Bernstein’s instincts, having proven himself one of the most versatile and in-demand composers in the industry. Forbes recently declared ”as a composer, his genre track record is one of the most impressive in modern day Hollywood.” Currently, McCreary is scoring the highly-anticipated blockbuster series The Lord of the Rings: The Rings of Power for Amazon Studios. As composer for the series, he will guide audiences through the major events of J.R.R. Tolkien's Second Age of Middle-earth.

McCreary also scored feature film Godzilla: King of the Monsters, Warner Bros. and Legendary’s follow-up to the 2014 hit. SuperheroHype declared “McCreary’s music is so epic that it’s hard to imagine Godzilla: King of the Monsters without it. There’s simply a level of supremely effective bombast in the soundtrack that is unrivaled by the current batch of blockbuster films.” In stark contrast with Godzilla‘s massive musical scope, McCreary used an inventive “toy orchestra” to score MGM and Orion’s hit Child’s Play (2019), creating what the Chicago Tribune declared “an all time great score.” The film features ”The Buddi Song,” the critically acclaimed song performed by the film’s star Mark Hamill, which the Charleston Post Courier described as “the creepiest thing I’ve heard all year.” These were not McCreary’s first monster films, as he collaborated closely with producer J.J. Abrams on the Cloverfield film series, scoring the Paramount Pictures and Bad Robot films 10 Cloverfield Lane and The Cloverfield Paradox. Time Magazine raved that 10 Cloverfield Lane‘s “finest feature may be Bear McCreary’s playfully malicious score, a beehive of worried-sounding strings that channels the spirit of Hitchcock fave Bernard Herrmann.” USA Today praised the “fantastic wordless opening set to Bear McCreary’s roiling, glorious score.” McCreary’s incorporation of Blaster Beam, yialli tanbur and other exotic instruments into the gripping thriller drew upon his experience from his first job: scoring the influential and revered Battlestar Galactica. His music for that series was lauded by Variety as “innovative,” “like no other” by NPR, and earned him a coveted spot on Io9.com’s “Ten Best Science Fiction Composers of All Time.”

McCreary’s wide-ranging film credits include Crip Camp, the Academy-Award-nominated documentary about the disability civil rights movement that was produced by Barack and Michelle Obama, as well as the Universal / Blumhouse hits Freaky and Happy Death Day, and The Professor and the Madman, the historical drama starring Mel Gibson and Sean Penn. He scored Paramount's animated feature Paws of Fury: The Legend of Hank, for executive producer Mel Brooks, and scored McG’s Netflix films Rim of the World and The Babysitter: Killer Queen, as well as the sleeper hit Anne Hathaway sci-fi/drama Colossal, Netflix's animated feature Animal Crackers, Danny Strong’s J.D. Salinger biopic Rebel in the Rye, and Disney’s Step Up 3D. In the video game world, he earned the prestigious BAFTA and DICE awards for his soaring score to Sony Playstation’s record-shattering 2018 hit God of War. His other video game credits include Square Enix's forthcoming fantasy epic Forspoken, Activision's Call of Duty: Vanguard, the Oculus experience Star Wars: Tales from the Galaxy's Edge, Ubisoft’s Assassin’s Creed Syndicate: Jack the Ripper, “Ryze: Call of Power” for League of Legends, and the ground-breaking television / video game hybrid Defiance. He made his foray into animated series, collaborating with Kevin Smith on the hit Netflix series Masters of the Universe: Revelation.

In recent years, McCreary has become increasingly recognized for his musical innovation. His iconic theme for AMC’s decade-long record-shattering global phenomenon The Walking Dead is one of the most popular in the medium today. He won a Primetime Emmy Award for Outstanding Main Title Theme for his theme to David S. Goyer’s historical fantasy Da Vinci’s Demons. The theme itself a carefully-constructed palindrome (it sounds the same forwards and backwards), evoking musical homage to Da Vinci’s own writings. His score for the epic Apple TV+ series Foundation was orchestrated around a piece of custom software, inspired by the show's mathematical premise. McCreary also received Emmy nominations for his work on the pirate drama Black Sails, from executive producer Michael Bay, Outlander, Ronald D. Moore’s global-hit adaptation of Diana Gabaldon’s acclaimed novels, and FOX’s Human Target which, along with his brassy- score for Marvel's Agents of S.H.I.E.L.D., helped pave the way for large orchestral scoring to return to television.  He has twice been awarded “ASCAP Composer of the Year – Television” by his peers.

Never content to work only in a darkened studio, McCreary has always enjoyed performing in concert. He has conducted performances of his music throughout North America and Europe, appearing at Fimucité in Tenerife, and the International Film Music Festival in Úbeda, Spain. He has composed concert commissions for the Calder Quartet and Getty Center, the Hagen Philharmonic and Ballet in Germany, the Television Academy, and the Golden State Pops Orchestra. In July 2014, Maestro Gustavo Dudamel conducted a suite of McCreary’s music with the L.A. Philharmonic and L.A. Master Chorale at the Hollywood Bowl. He is currently working on a new commission for the Hollywood Bowl that is set to debut in 2022.

In quiet moments (few and far between), McCreary often wonders what his longtime friend and mentor Elmer Bernstein would say about his career. Sadly, he will never know. The iconic Bernstein passed away on the very day that McCreary began composing his original score for his first television series, Battlestar Galactica. McCreary says he will always look back with gratitude to the day when he first crossed paths with Bernstein. “Elmer’s guidance was a gift I can never repay,” McCreary said. “But I will spend my life trying to do so.”