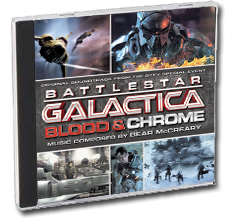 Tonight, the “Battlestar Galactica” prequel film “Battlestar Galactica: Blood & Chrome” airs on SyFy. After premiering on Machinima’s YouTube channel last November, it will finally have a DVD/BluRay release on February 19th. Later this spring, my scores to both “BSG” prequels will be released by La-La Land Records, starting with a limited edition CD of “Blood & Chrome” in March and a comprehensive “Caprica” album in April (click here for details).

In tonight’s video blog, you’ll hear exclusive score clips, and get a look at my recording sessions for this long-awaited prequel film:

All of this has happened before…