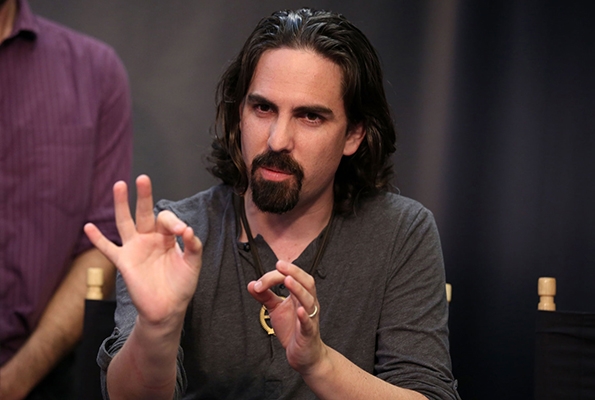 If you’ve tuned in to the glut of geek-friendly TV shows over the past decade, then you know composer Bear McCreary’s work: the thumping wallop of his drums-driven work on Battlestar Galactica, the creepy-as-hell soundtrack that plays over the zombiepocalypse on The Walking Dead, the propulsive synth-heavy opening music for Syfy’s video-game tie-in Defiance. He’s helped define the sound of both cult and crossover shows for the Comic-Con nation, and if you’ve been lucky enough to catch Starz’s period-fantasy drama Da Vinci’s Demons — in which a studly Leonardo Da Vinci fights cults, hangs out with mystics and somehow finds time to romance a mistress of Lorenzo de’ Medici —  it’s clear that this former protegé of Elmer Bernstein can do stately scores in addition to spooky and space-operatic themes.

With the second season  of Da Vinci’s Demons premiering on March 22nd, we asked to McCreary to break down how he wrote the themes for five of the best-known TV shows he’s worked on. Here’s what he told us.

“I was only 18 months out of college when I got this gig…I grew up watching a lot of genre movies, so to suddenly find myself working on what I’d argue is one of the most important pieces of science fiction in the last few decades, it was a huge rush. The idea was to use the oldest instruments we could possibly use — a lot of voice and percussion, obviously, but also primitive woodwind instruments. We didn’t want refined and polished; we wanted primal. Keep in mind that, when we started doing this ten years ago, the idea of scoring outer-space dogfights with something besides huge, heroic  brass bands seemed incredibly daring. People thought we were nuts, and it became the defining sound of the series. And though some had said that we used primitive instruments as a way of hinting at the show’s ending, I can personally assure you that none of us had the slightest idea where Battlestar would end up going. That surprised us as much as it did the audience.”

“The taiko drums are really what makes this theme take off at the end, but I can’t take credit for that; it really belongs to producer Michael Rymer. He was adamant about not using orchestration for the original miniseries, so he threw in some temp music just have sound against the images. One of the things he happened to put in there, however, was this Japanese drumming, and it was suddenly, ‘Hey…this is good. This works!’ When I ended up taking over the music near the beginning of Season One, we knew we wanted to incorporate them as much as possible. This was where I learned to layer things, from instrumentation to various character themes. It all starts here.”

“When I read the comics, I quickly realized that this world that [author] Robert Kirkman creates is destined to kind go on forever. You feel like, even if the books end, there’s no relief from this apocalyptic state. So my first thought when I sat down to write a theme was: This should be open-ended and relentless. You’ll notice that there’s really only one major rhythmic idea with one melodic structure — but it repeats over and over and over. There’s no resolution. It’s designed to get into your head and make you feel ill at ease. I’m actually surprised that it’s resonated as much with viewers as it has, but people have told me that it’s one of their favorite TV themes ever. That’s pretty much all you want to hear when you’re a composer. [Laughs]”

“This was a dream job: I got to work with Joss and Jed Whedon, and in the Marvel universe. The first question I asked, naturally, was how would this tie in musically with the films. When you think about it, there’s no real singular theme that you associate with the films that orbit around The Avengers. Which was a good thing, because if we’d quoted music from the Captain America or Thor movies, it would probably take away from the fact that the show is really about the people who work around superheroes, not the superheroes themselves. But I still got to work with a huge orchestra; if a television show can get 20 to 25 players, you break out the champagne. I’ve been able to use 55 to 100 players, so I feel like a kid in a candy store. I essentially get to use scores that are on the scale of the movies but not subject to the popcorn challenge of relying on huge, mind-blowing special effects. You have to generate tension through the storytelling and the music. It’s really fun.”

“I’d been doing so many sci-fi and horror shows that I was happy to do something a little different…I needed a breath of fresh air, and thankfully, this gig came along when it did. The great thing about scoring sci-fi shows is that you basically get to make up the rules, because you’re creating a self-contained universe; when you’re doing a period piece set during the Renaissance, however, there’s a strong history you have to honor. Even if most of the audience isn’t well-versed in what the music during that era, they’ll feel it if it’s off. I knew virtually nothing about Renaissance-era music —but then again, I knew nothing about taiko drums before I did Battlestar, and that turned out okay. [Laughs]”


“I researched the time period to death. The theme that I used for the Medici family? It was written by their court composer for them. Seriously, if Lorenzo de Medici watched our show, he would recognize his music! I’m not sure that total historical fidelity was what [creator] David S. Goyer wanted when he hired me; I think he wanted something bold and adventurous. But my idea was, well, let me try to do both. I’m going to take a chance here. You can hear bits of electronic music and modern percussion in there, but there’s a heavy Renaissance-music influence. I was really nervous when I played him the demo, but he loved it.”

“I feel like this theme is the polar opposite of what I did with Da Vinci’s Demons…the music for that show is organized, precise, like a very carefully built house of cards. The Black Sails theme is purposefully nasty, sloppy and chaotic. It feels improvised, even though it’s not; the idea was to make it sound as if it was actually being played on a ship by weary sailors after a long day’s work. It’s almost entirely acoustic, and came about simply through bringing together a bunch of musicians and jamming in a room together. It keeps losing the beat and going out of tune, and the more mistakes I leave in, the better.This is the advantage of doing a show about pirates. You can leave the perfectionist side of your brain at home.” 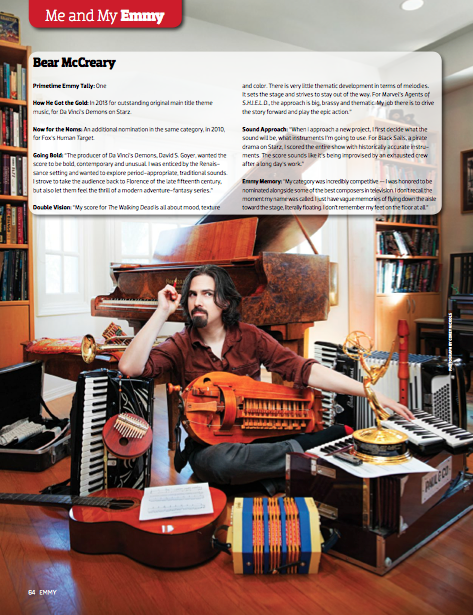 “More live musicians than any live-action series in years”