SPOILERS AHEAD: Tonight’s episode of Terminator: The Sarah Connor Chronicles, aptly titled Mr. Ferguson is Ill Today, is a particularly unusual story.  The plot is fractured into multiple accounts of the same narrative from the perspective of each of the major characters, the location was unique and, above all, the story culminates in the death of a principle character, Cromartie.  (The episode’s title is actually the first line of dialog Cromartie spoke in the pilot!)  While the multi-perspective storyline provided interesting musical challenges, it was the episode’s Mexican location that gave me the most room to explore.

“Mr. Ferguson” allowed me a second opportunity to produce a song for Terminator, after the season premiere’s searing “Samson and Delilah” with Shirley Manson.  This time, I arranged a traditional Mexican folk tune called “La Llorona.”

I first heard about this song a few days before I saw the episode.  I happened to be hanging out with the episode’s director Michael Nankin (whose skillful touch Battlestar fans will recognize from some of the best episodes of that series, including Maelstrom) and he told me that he was experimenting with the song in his cut.  So, even before the spotting session with the producers, I was already thinking about how I could take a traditional Mexican folk tune and Terminator-ize it. END_OF_DOCUMENT_TOKEN_TO_BE_REPLACED It’s finally official!  FOX has picked up the remainder of season 2 for Terminator: The Sarah Connor Chronicles, allowing us to complete a full 22-episode season.  Our ratings have been low this fall, so I’m glad that FOX understands how incredibly competitive our time slot is.  I can only assume that impressive downloads and DVD sales must have been a factor.  Read the entire story at The HOLLYWOOD REPORTER.

END_OF_DOCUMENT_TOKEN_TO_BE_REPLACED

This entry is the first in what I hope will become a continuing series of interviews with industry professionals.  Rather than comprehensive, career-spanning interviews, I will focus on one project or aspect of a person’s career that relates to an experience of my own.  Loyal readers can enjoy in-depth detail, and I have the chance to learn something professionally valuable.  The format will be unusual, since half the blog will be interview and the rest my own experiences and inevitable opinions.  But the interviews will be easy to spot if you want to scan ahead to the pearls of wisdom from people far more knowledgeable than myself. 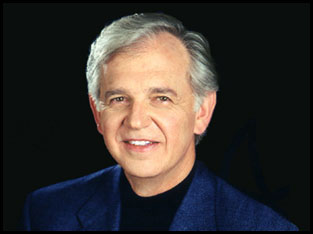 For this first interview, I’m thrilled to have spoken with renowned composer Bruce Broughton.  I’ve loved Bruce’s work ever since I was a kid, when I first heard his knock-out scores for Young Sherlock Holmes and Silverado.  The latter project, combined with his brilliant work for Tombstone, instigated my life-long love affair with classic Westerns and their scores.

My interview focuses on one of his most under-appreciated credits: Tiny Toons Adventures.  I always adored his ­Looney-Tunes-inspired score for this now-classic series, but my admiration grew tenfold when I had a brief opportunity to follow in his footsteps, writing a full-fledged orchestral animation score for this loveable little scamp, Atomic Al: 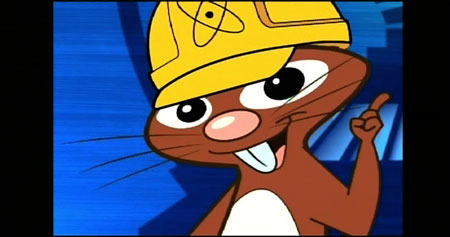 END_OF_DOCUMENT_TOKEN_TO_BE_REPLACED

LIGHT SPOILERS AHEAD: I don’t know if my brutal schedule will allow for me to write about every episode of Terminator: The Sarah Connor Chronicles this season, but tonight’s Automatic for the People features outstanding pieces I can’t resist sharing.  This week, I wrote lovely score cues for new plot lines and characters, but it was actually the “source” music I had the most fun with.  (This term refers to music heard by characters in the film, as opposed to score only experienced by the viewing audience). 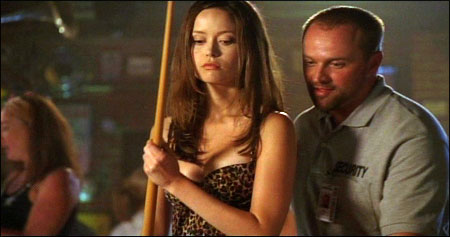 Several scenes took place in a bar.  Typically, there will be music at bars in film and tv, but Automatic for the People presented a unique opportunity.  Sarah and Cameron infiltrate a bar and Cameron’s job is to get close enough to the security guards playing pool to visually scan their badges.  So, Cameron plays the “helpless girl who can’t play pool” trick.  Of course, it would have been just as easy for her to kill them all, but not quite as subtle.

END_OF_DOCUMENT_TOKEN_TO_BE_REPLACED 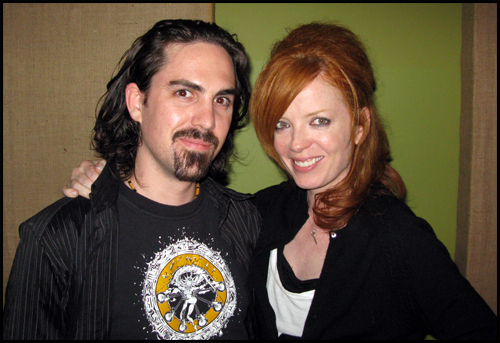 Bear and Shirley in the studio, recording vocals for “Samson and Delilah”

The second season of Terminator: The Sarah Connor Chronicles began with a bang tonight.  As the series composer, I returned to the smashing metal percussion and electric string quartet textures of the Sarah Connor musical soundscape.  However, Samson and Delilah also allowed me to once again stretch from the confines of underscore composer into song producer and arranger, and gave me the opportunity to work with Garbage lead singer and songwriter Shirley Manson.

The song I produced for her was featured prominently in the opening moments of the episode.  And it will be the first track of the forthcoming Terminator: The Sarah Connor Chronicles soundtrack CD that I’m thrilled to announce will be released by La La Land Records as early as next month!

The evolution of the song began last spring, long before scoring or even production began, in fact before the second season was officially picked up by Fox.