The third episode of “Da Vinci’s Demons,” called “The Prisoner,” allows the series to explore the Gothic horror genre. The spooky imagery of a damned convent is accompanied by ethereal female vocals that take center stage in the score.  Tonight’s video blog introduces a few of the vocal ensembles you will be hearing during the first season:

MAJOR SPOILERS BEYOND: “The Prisoner” begins with an introduction to the titular character: a mysterious old man with a long grey beard who’s clearly being held prisoner in Rome and whose face we will not see.  Riario enters the dungeon and engages him in the ancient Chinese game of Go, that will be a framing device for the entire episode.  I wrote a theme for this character, called The Prisoner Theme:

The melody is always played on a period string instrument, such as viola da gamba or violone, but I wanted to give it a unique quality just for this character.  So, I doubled the melody two octaves higher with a Japanese flute called a bansuri.  The bansuri offers a breathy contrast to the reedy strings and, when tucked back in the mix, is almost indistinguishable as a second instrument.  The subtle presence of an ethnic instrument hints that The Prisoner is a person of mysterious origin. 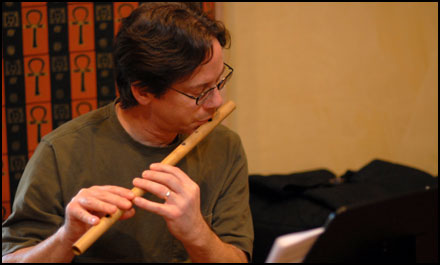 The first five minutes of the episode are scored as a continuous montage, with urgent strings playing a tremolo ostinato weaving the various scenes together:

This ostinato is one example of several thematically related quartet ostinatos that will lay the foundation for much of the score for “The Prisoner.”  Textures like this will weave throughout the scenes as Leonardo struggles to solve the mystery of the afflicted convent. 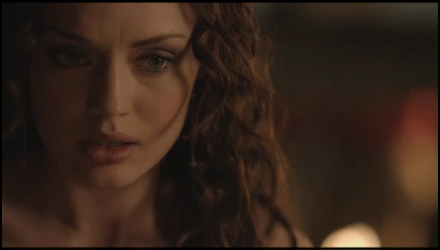 For this opening sequence, the tremolo string ostinato provides a backdrop upon which I placed themes appropriate to the characters on screen at any given time.  When we witness Lucrezia hiding her documents from Rome, a solo flute and Celtic harp sneak in with a slippery variation on her theme:

As we watch Leonardo ponder the meaning of the South American map, we hear a statement of his theme woven into the urgent string texture:

As this major sequence ends, Da Vinci stares at the map on his wall lost in thought.  Here, the bells and bowls that signify the Sons of Mithras Theme add a contemplative quality that reminds us of the scenes with the Turk.  (I strive to keep the Turk in our minds, even in episodes where he’s not on camera.) 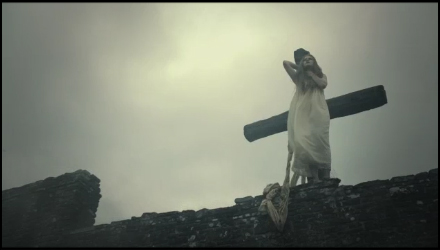 Tonally, “The Prisoner” takes the series into uncharted territory.  The episode is a mystery that steps into Gothic horror.  The chills begin early in the episode, with the introduction of a possessed nun screaming in the town square who eventually stabs herself in the eye. 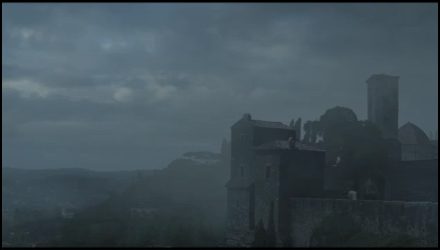 This prompts Giuliano de Medici, and soon Da Vinci himself, to set out for a convent stricken with a terrible curse, where they reluctantly join forces to cure the nuns. Da Vinci’s love of science comes into direct conflict with the religious views of the sisters there. Matters worsen with the arrival of Lupo Mercuri, an agent from Rome sent to perform his signature brand of exorcism that leaves its patient dead, but saved.

I wanted to give these sequences a liturgical quality that would be both haunting and historically accurate.  The episode focuses on exorcism and so I worked with music historian and consultant Adam Knight Gilbert to find a song from the time period that would work.  After sifting through a dozen or so chants and songs, we found the Prayer to Saint Michael. The text in this prayer was wonderfully appropriate for this spooky episode:

You will hear female voices throughout this episode singing various phrases from this text, most of the time set in the actual melody in which the lines were sung in the fifteenth century.  The closer our heroes get to the heart of the mystery at the convent, the more prominent the vocals become, guiding them along their path. 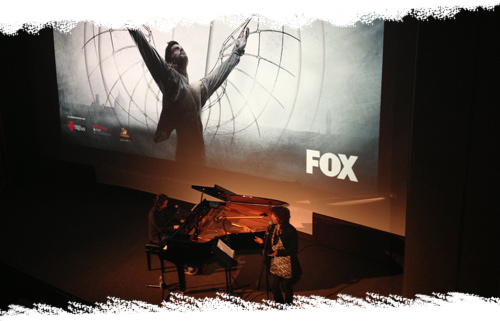 Despite the full sound, all the vocals in this particular episode were performed by Raya Yarbrough.  Through the years, I’ve asked Raya to sing in a variety of languages and styles, so I knew she was up to the challenge here.  (A few weeks ago, she and I actually performed the entire Prayer to Saint Michael on stage together at the “Da Vinci’s Demons” world premiere.)

While Giuliano struggles to solve the mystery of the afflicted nuns, his brother Lorenzo is in deep conflict about what to do about the apparent spy within his ranks.  He confides in his wife, Clarice, giving us our first real glimpse into her character.  Clarice de Medici reveals herself to have a fierce political instinct.  She is aware of everything going around her and is able to visualize cunning solutions.  She’s clearly far more than a mere wife and mother to this family. 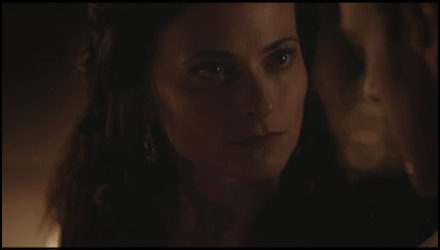 I represented her musically with a solo English horn performance of the Medici Theme:

We hear the English horn once again, later in the episode, when Clarice confronts Lucrezia, and gazes at the fresco of her family on the wall.

For scenes focusing on Lorenzo, I typically use Renaissance strings or lutes to represent the Medici Theme.  These sounds give the theme a piercing, processional quality, fitting for a leader.  For Clarice, I found the English horn brought a distinctly emotional, almost feminine quality. The solo woodwind’s texture is smooth and inviting, and allows us to become lost in Lara Pulver’s performance of the character. 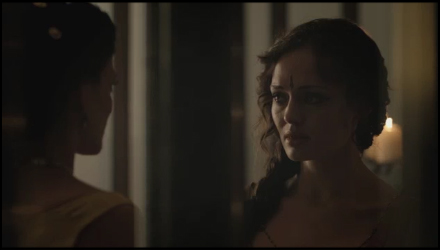 After speaking with Clarice, Lucrezia is confronted by Becchi who informs her that they are searching for a spy in the house.  She struggles to maintain her composure as she feels the metaphorical noose tighten around her.

Here, soft percussion ticks away relentlessly, like a mouse scratching on the other side of a wall.  The Celtic harp, frequently associated with her theme, introduces a simple ostinato that sneaks in and out at unpredictable intervals. Beneath that, deep undulating swells of strings and synthesizers add horrifying, lurching phrases. I wanted to musically represent that feeling you get in your gut when you suddenly realize you’re in trouble and your body kicks into overdrive. 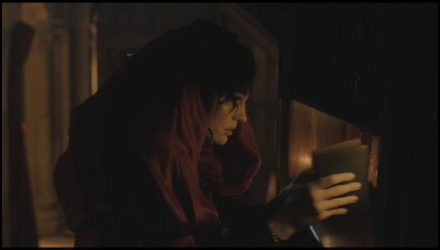 Lucrezia devises a terrible plan to frame Becchi, and sneaks into the Medici home to plant evidence. While there, she seduces Lorenzo in the stables, and plants the idea in his mind that the spy could be someone very close to him.

Their sex scene is rough and unpleasant.  She grips the bars of the stables as if she’s in a prison, an important visual metaphor for her circumstances. The score here is not romantic in the slightest. Instead, Celtic harp ostinatos sneak in against a bed of washy synths, while heavy percussion adds subtle, shuddering phrases, almost like earthquake tremors. 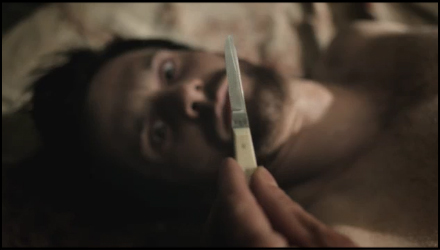 Back at the convent, Da Vinci solves the mystery and debunks the threat of demonic possession once and for all (set against a flurry of quartet tremolo ostinatos).  At the peak of his triumph, he suddenly slips into a terrifying vision.  He is trapped in a surreal nightmare, where images of dissection, dead bodies, Riario, his mother and the statue haunt him.

My cue for this sequence is a carefully constructed combination of notated music and edited sound design.  I took snippets of my score from the first two episodes and chopped them up into digital samples, reversed them and sprinkled them throughout the scene. 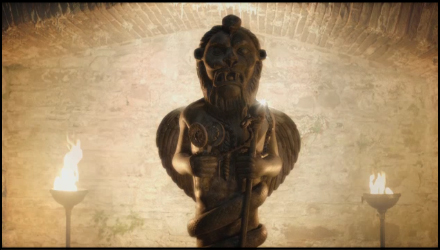 Thematically, I wanted to reference the scene from the first episode where he struggled with his ideas and smoked opium (my full blog entry about that episode is here).  There, I’d written a specific string quartet arrangement meant to emulate the sound of a backwards recording.  For this episode, I took that phrase and actually reversed it, imaging that it would sound totally insane.  To my surprise, the Calder Quartet did such a fantastic job performing that phrase to sound backwards that, when reversed, it simply sounded like a normal phrase being played forwards. There was nothing unsettling about the sound at all! I abandoned that idea and looked for other moments to reverse.

You can definitely hear the backwards recording in action when the dead Roman soldier rises from the table.  There, a solo viola da gamba plays the Backwards Da Vinci Theme:

This is actually a recording of a viola da gamba playing the Forwards Da Vinci Theme that has been digitally reversed.  (Proof once again that my mirror writing in the theme actually works!)

The cue for this terrifying vision is honestly probably the most terrifying piece of music I’ve ever composed.  The blend of written music and carefully edited and manipulated samples results in a deeply unsettling soundscape.  It’s not the kind of track that shines on an album, so I don’t know if I’ll ever release it.  Nevertheless, I’m immensely proud of this one, and grateful that I don’t have to do music like this every day or I’d never sleep again. 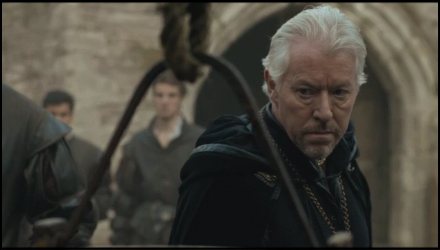 At the end of the episode, Lucrezia is revealed to us as the perpetrator of the crime at the convent.  In this sequence, the Celtic harp provides an urgent ostinato (similar in construction to the quartet ostinatos used throughout this episode) and two flutes offer a sinister statement of her theme. 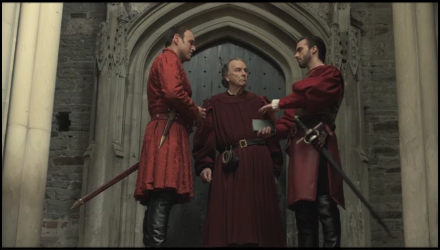 Lucrezia’s treachery succeeds in framing Becchi as the traitor.  When Lorenzo finds out that damning evidence has been found in Becchi’s quarters, we get our first glimpse of the wrath that he is capable of as two violins play a menacing, minor variation of the Medici Theme.

The episode concludes as it began, with a montage framed by The Prisoner and Riario’s game.  The score, too, makes reference to the episode’s beginning.  The quartet powers the scenes with a new and exciting ostinato, built from the same melodic material as the others:

As Riario throws the game to the floor in a display of petulance and power, the viola da gamba and bansuri combination recap The Prisoner Theme.  Here, the theme is varied into more dissonant variations, representing Riario’s growing frustration with this mysterious character.  Once more, a solo flute and Celtic harp float atop the string ostinato to underline the mystery of Lucrezia’s motivations as we witness her, back in her home and metaphorical prison.  We are left with The Prisoner’s enigmatic closing thought: as one game ends, another begins. 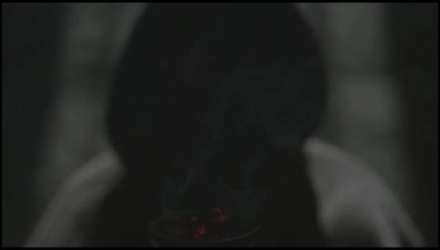 Next week’s episode will tighten the tension between Florence and Rome, and feature some of my best percussion writing on the series to date. Thanks for reading.  See you then!