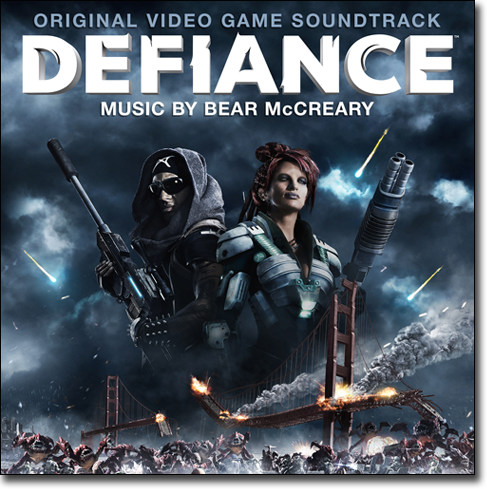 This month brings us the long-awaited rollout of the groundbreaking multimedia science fiction epic “Defiance.”  Developed from the beginning as both a SyFy television series and an immersive videogame from Trion Worlds, “Defiance” marks the first attempt to debut a franchise of this scale in two unique formats.

The game and the series take place in a future Earth, terraformed by invading alien races known as the Votan.  Themes of exploration, racial tension and frontier life have been transplanted from the western genre and fit perfectly in this strange new vision of our world.  The game and series share principal characters, visual effects, production design and story arcs.  They also have one other important characteristic in common: the original score. 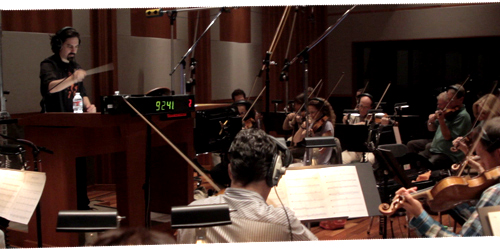 When I compose the score for a project, I feel like I’m creating a musical world.  Projects like “Battlestar Galactica” and “Caprica” gave me incredible opportunities to not only score the drama on screen, but to provide snippets of music that directly impacted the characters and told the audience something about the worlds they came from.  Still, even those experiences couldn’t have prepared me for scoring both the game and series of “Defiance.”

I was tasked with writing a daunting amount of music, including two hours of energetic music for the videogame, and nearly eight hours of score for the thirteen-episode season.  During all this, I constantly juggled a dozen or so character themes and followed intricately crafted story arcs.

“Defiance” needed much more than mere background score, however.  I was asked to take part in the world-building from the earliest stages of development.

I designed distinct musical styles for the various Votan races. I composed their classical music. I produced their contemporary pop songs. I adapted well-known Earth songs into alien interpretations and I wrote detailed treatises on the design, construction and functionality of Votan instruments.  I created a vast musical history for the world of “Defiance” and was then set loose to produce the score for both the game and the series.

There is far more to discuss than I could ever cover in a single blog entry.  So, I’ll get into more detail about the score for the series in upcoming blog entries, beginning with one for the show’s epic two-hour premiere on April 15th on SyFy.

Before then, your first opportunity to dive into this new world comes today, with the release of Trion Worlds’ massively multiplayer online videogame.  Gamers who picked up the Collector’s Editions of the game got a limited edition CD of my score with it (scroll down for an updated track list for this CD).  For everyone else, I’m thrilled to tell you that my original score for the videogame is already available now, on iTunes, Amazon, Spotify, X-Box Music and many other digital retailers.  (You guys who really want a CD release, stay tuned for more soundtrack information about “Defiance” and other exciting developments!)

I can think of no better introduction to the musical universe of “Defiance” than the main title theme from the game.  Check out the official music video of the album’s first track,  “Theme from Defiance.”

(Special thanks to Kevin Porter for cutting this awesome video!)

Though this track is the main title theme for the videogame, the melody, ostinato and instrumentation provide the main theme for the entire franchise.  You’ll hear this tune repeated as the Main Title of the SyFy series, as well as the heroic theme for Nolan and Irisa, the principal characters.  There are several other key themes represented on the videogame soundtrack that will make an eventual appearance in the series soundtrack.  I’ll delve more into these melodies and their construction in a future blog entry. 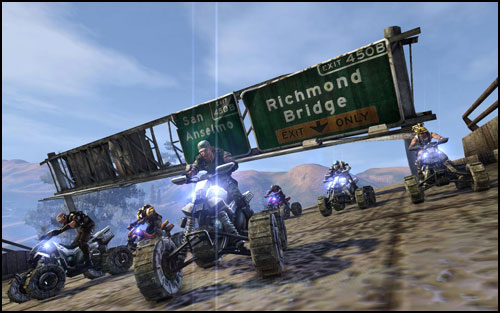 I began work on “Defiance” more than a year ago, long before production had begun. I was given a script, but got most of my inspiration from the production design art that had been produced for both the game and the series.  The task of building a musical world for a wholly new science fiction universe was daunting, especially because I’d done so much of the same world-building on “Battlestar Galactica” and “Caprica.”  I wanted “Defiance” to stand apart from those works, so I knew I had to push myself outside my comfort zone for science fiction drama. (The fact that I even have a comfort zone for long-form science fiction drama tells you I’ve done this a few times!) 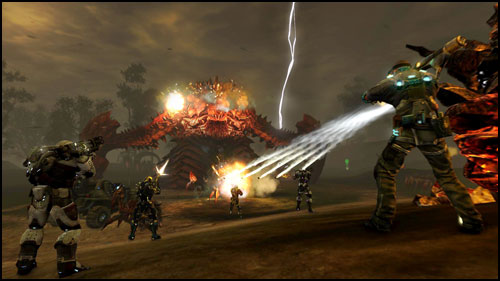 A few months prior to being hired on “Defiance,” I had just completed scoring “Battlestar Galactica: Blood and Chrome,” a project that allowed me to dip my toes into electronic synthesis (I have a detailed blog entry about that process up here).  On that score, I struggled to keep the synths tucked in the background, behind pounding percussion and searing electric guitars.  Their placement was pretty subtle. Honestly, if I hadn’t blogged about it, I’m not sure people would’ve even realized there were synthesizers there!  I was very excited by the sounds I was playing around with, however, and regretted that I couldn’t feature them more.

When “Defiance” came along, I realized I could go back to those synths and dig much deeper. Rather than hiding the synthesis behind layers of acoustic instruments, I decided that I’d put them right out there, front and center.  Though “Defiance” features a large orchestra, ethnic soloists, solo percussion, group percussion, vocals, woodwinds and guitars, the sound of the synth programming stands out above all.  The immediate sound of the score is unlike anything I’ve ever done before.  Nevertheless, I hope fans will quickly recognize my style in the melodies, percussion and orchestration. 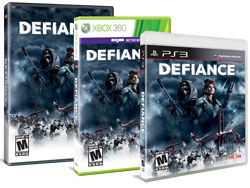 Once I’d written the key themes, and narrowed down the styles and instrumentation, I was free to start scoring both the series and the game.  Previous videogames I’d scored were primarily single player campaigns or multiplayer games with limited locations and match durations.  “Defiance” is the first MMO (short for ‘massively multiplayer online’) game I’ve ever scored.  An MMO  presents entirely new challenges for a composer, because the player is free to roam around the world in any direction they want, and enter any skirmish they feel like.  There’s really no way to predict what their experience will be.

This affected the way I wrote music, because I had no control over the order in which players heard my music.  In a single player campaign, you can write music for level 1, have it build into level 2 and so on.  Here, each area needed music that could completely stand on its own, with its own unique levels of intensity.  In essence, I had to make sure that players could hang out in one area for long stretches of time without getting bored by repetitive music. 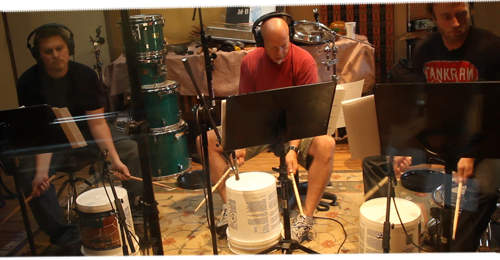 As a result, melody plays less of a role throughout many of these cues.  The real stars of this music are the texture and colors.  I spent hours tinkering with synthesizer patches, and layering effects simply to create the one perfect sound I could use as the basis for a cue.  After I’d sequenced out the electronics, I would next add in layers of orchestra, soloists and live percussion.  The cues were designed so that these layers can work together or individually.  Working with Trion’s dedicated audio team, we ensured that players hear a maximum amount of variation throughout their experience. 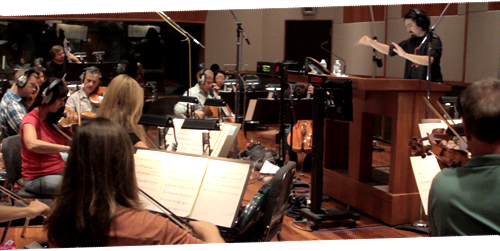 On album, I must say these tracks are a bombastic, kick ass good time. I dove head first into electronic music in a way I never have before, and had a fantastic time doing it. In fact, I think my “Defiance” videogame record feels almost like a crazy dance / electronica album, and less like a soundtrack.

I was surprised by a few of the tracks, especially “Ninety-Niners,” “Ridgecrest Mine” and “Sausalito,” because they have a wonderful raw acoustic quality that ties together all the angular synth programming.  Listening to this record, you can hear me throwing paint on a canvas and playing around with a whole new style.  Which cues stand out to you? Can you guys still recognize my style here?

I’m very excited to see what you guys think, and especially to see how the tracks work in the finished game.  I’m away from my Playstation 3 for most of the month, but in a few weeks, I’ll be back online and roaming around the game.  My handle is “LV456,” so say hi if you see me around! Enjoy the album, and stay tuned for more soundtrack album updates and blog entries about the “Defiance” series and the forthcoming series “Da Vinci’s Demons.” 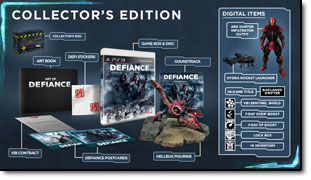