God of War will return for Playstation 4, and I am honored to score it.

In addition to composing all new themes and score for this beloved franchise, I was thrilled to take part in the game’s unveiling, by performing my original theme and gameplay music with a full orchestra at Playstation’s E3 2016 press conference at the Shrine auditorium in front of five thousand people.

Unlike most press conferences, the first sound heard was an orchestra tuning up. Then, I emerged from behind the red curtain and walked to the front of the group. I took a bow, turned to my musicians, and raised my hands. The crowd hushed. Clearly this show would not start with speeches or visuals, but would begin with music. With my arms raised in anticipation, I took a deep, long breath. I reminded myself to enjoy every second of what was about to unfold: scoring a live playing of a video game in real time with a full orchestra. 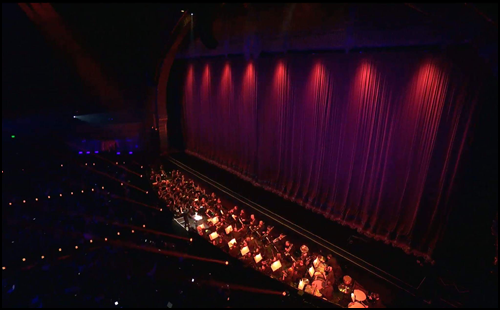 This moment was the culmination of a long journey, because my work on God of War began nearly two years ago. One rainy November afternoon, I was called into Sony’s Santa Monica Studio to meet with acclaimed music producers Pete Scaturro and Keith Leary (with whom I had collaborated closely on Sony’s SOCOM 4: US Navy Seals), to discuss a secret project. Our conversation revolved around folk music, mythology, Nordic ethnic instruments, vocal writing, and classical thematic development. “Wait a minute.” I asked. “Is this… a new God of War?!” 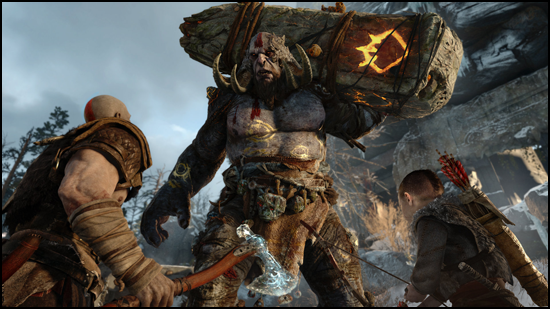 Their facial expressions told me everything I needed to know. And with that, I realized I was tumbling headfirst into a daunting and challenging dream project. 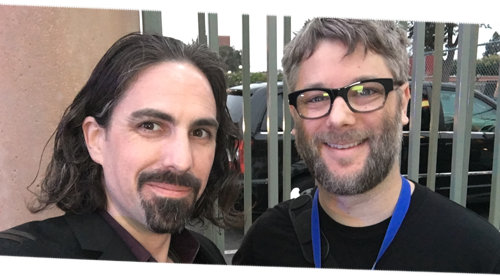 I met game director Cory Barlog early in the process, and immediately knew the franchise was in good hands. Cory was the director of my favorite game in the series thus far (God of War II), and I could immediately see why. He is a natural-born storyteller. Hours flew by in our engrossing story sessions, where he would share his vision for the narrative. I felt like our meetings were being held around a campfire.

Creative discussions with Cory would prove vital for me to understand the world of God of War. The new game is rooted in Norse mythology, and as such, introduces many new characters, story arcs and relationships. I took detailed notes, trying to map out how many musical themes would be necessary to guide the audience through the epic story. 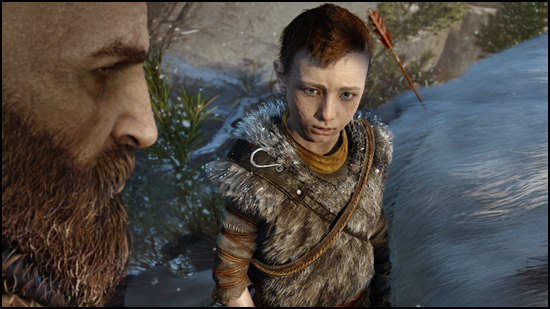 As my composition began, I focused all my initial efforts on one piece of music: the new main theme, or Kratos Theme. I spent several months working with Cory, Pete, Keith, Sony music director Chuck Doud, and the rest of the development team, crafting this theme. Everyone was collaborative and offered useful feedback. Each subsequent draft got better and better. The final version is arguably one of my most structurally satisfying and catchy melodies, thanks in part to the creative guidance from my partners at Sony. 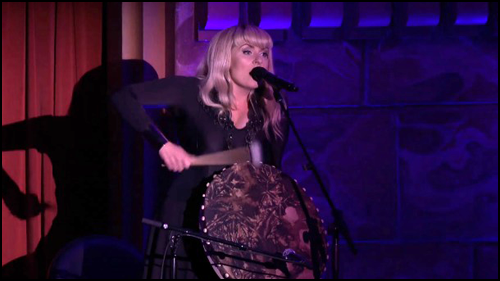 The development team and I gravitated towards low orchestral instruments, Icelandic choir, deep male vocals, powerful female vocals (in particular Faroese singer Eivør Pálsdóttir, whom we flew in to Los Angeles for the performance), folk percussion, and Nordic stringed instruments such as the nyckelharpa and hurdy gurdy. The main theme features all of these elements.

When the decision was made to unveil God of War at E3 2016, Playstation came to me with a radical idea. They asked me if I would be willing to perform my original score live to picture with a full orchestra at the press conference. Naturally, I was on board immediately and enthusiastically. 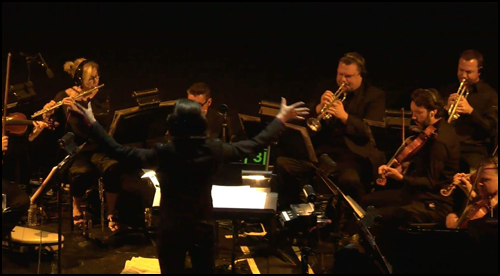 The logistics of playing orchestra live to picture are daunting enough. This event, however, was further complicated by the fact that the picture would change every time because it was live gameplay, not a pre-rendered video. So, traditional sync techniques such as click tracks and streamers would be useless. I worked closely with the development team to come up with solutions that would allow me to follow the gameplay with the orchestra, and still allow Cory the flexibility to truly play the game in real time. The challenge was terrifying and thrilling. 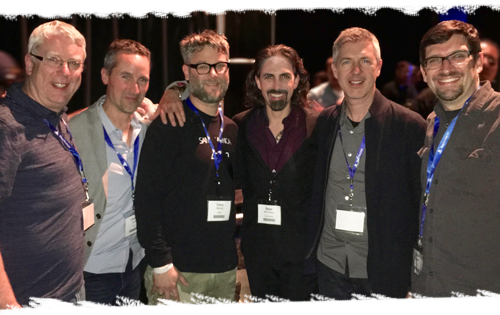 My experience with the event was made enjoyable thanks to everyone at Sony, including Chuck Doud, Pete Scaturro, Keith Leary, Joel Yarger, Kevin Scharff and Jason Swan. The musicians were remarkably supportive, in part thanks to organizational help from Peter Rotter, Marc Sazer, Steve Dress, Tim Davies and Julie Gigante. And I was personally held together in one piece thanks to everyone on my Sparks & Shadows team, especially Joe Augustine, Sam Ewing, Joanna Pane, and Kaiyun Wong. And I must thank SIE Worldwide Studios chairman Shawn Layden for entertaining this crazy idea in the first place. I was honored to lay down some heavy orchestral fanfare for his walk out on stage. 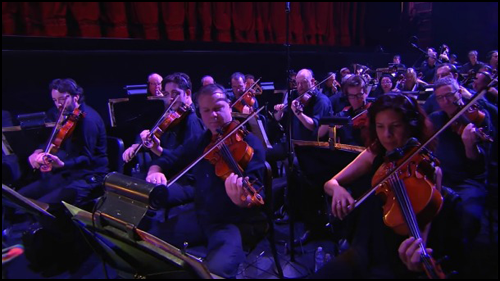 At the start of the performance, with nearly two years of work behind me, I stood before the orchestra and took a deep breath. I gave the cue and my God of War theme was heard by an audience for the first time. The moment the melody reached its climactic notes, the audience erupted into cheers, as if what they heard was the chorus to their favorite song. But, they had never heard it before! I had always hoped the theme would resonate with fans, and at that exact moment, I knew it had. 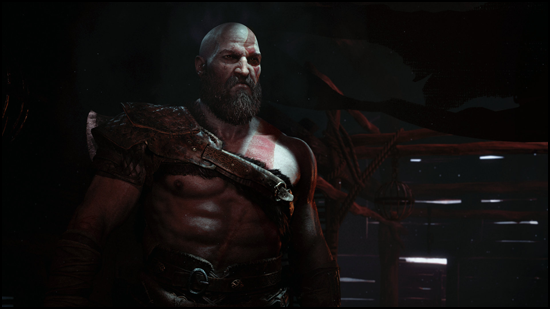 After the overture concluded, the audience burst into cheers. They still had no idea what the music was for, but they were pumped. When the curtain raised, and the actual gameplay began, I cued the orchestra as Kratos emerged from the shadows, confirming at long last, that this was the announcement of God of War. Words fail to describe how I felt in that moment. The reaction from the crowd was thunderous, threatening to shake the walls. The whole auditorium was on its feet.

The gameplay demo is now online, and I highly recommend watching it. The textures, character animation and camera movements are so cinematic I worried people might not realize its actually built entirely from gameplay!

One of my favorite moments comes at the end, when Kratos battles a gigantic troll. I conducted the orchestra at the foot of the monumental screen, striving to keep up with the combat. I found myself subconsciously moving my body as if to avoid massive hits from the troll, swinging left and right, ducking as I cued the orchestra to follow me. It was the single most thrilling videogame experience I’ve ever had! 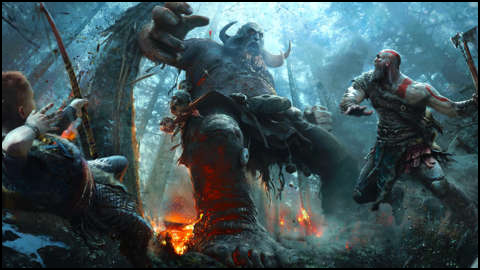 The holy grail of videogame composition is creating for the player the feeling of a conductor watching the gameplay and cueing an orchestra to follow in real time. I joked with Cory later that we were spoiling him: he’ll never want to play a videogame without orchestral accompaniment again.

As I stepped off the stage, my phone buzzed incessantly with texts from friends and family who had no idea I was doing this. I felt a momentary sadness that this thrilling experience blasted by in a brief fifteen minutes. Then, that letdown quickly morphed into excitement; after all, the game is still in production, and I still have a lot of music to compose. I returned to my studio with newfound inspiration.

My journey on God of War is only just beginning, and I look forward to sharing more of it with gamers in the future.