How the Nerd Stole Christmas

My newest score, a special holiday treat for you all, just went online a few days ago.  I collaborated with the supremely funny James Rolfe (a.k.a The Angry Video Game Nerd) and scored his final game review for 2010, “How the Nerd Stole Christmas:”

So, how did this crazy collaboration happen?  Check out the following “making-of” video, for exclusive interviews with James and myself, and behind-the-scenes footage from our recording session.  And since you’ve all been good boys and girls, at the bottom of this entry, there’s a FREE DOWNLOAD of both the song and score from the film!

When James and I first discussed the music for his video, I realized it would be a serious amount of work.  The review, like his others, contained game footage with his unique commentary that generally required no original score.  However, a substantial portion of the video was a parody of “Dr. Seuss’ How the Grinch Stole Christmas.”  The story was told in rhyme, to a series of brilliant drawings by frequent “Nerd” artist Mike Matei.  A strong musical score would be necessary to connect the narrative story arc with the game footage sections, and unify the whole piece. 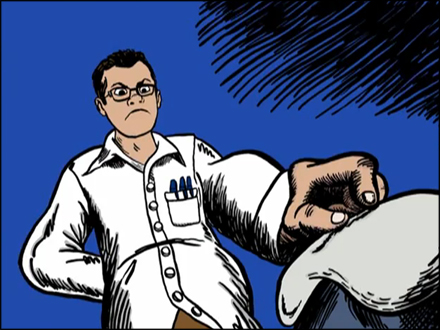 And, if that weren’t enough to do, there were song segments as well!  James wanted a singer to re-perform the classic “You’re a Mean One, Mr. Grinch” with his parody lyrics.

This whole thing sounded like a lot of fun, so I dove in.  My first task was to come up with instrumentation that would fit the story.  The score to the classic Chuck Jones film was composed for a small jazz orchestra, very typical for the era.  So, a small ensemble of saxophones, clarinets and flutes was an obvious choice.  However, I wanted the score to do more than simply reflect the movie we were parodying.  I wanted the music to also reflect The Nerd’s personality. 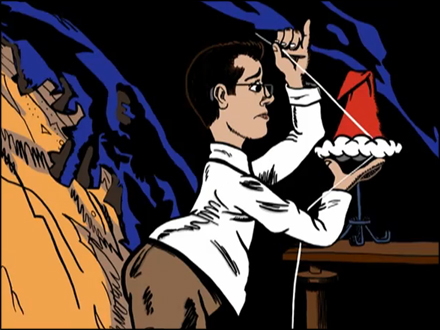 I added to the jazz band a diverse collection of classic videogame sounds.  These came sampled directly from NES, SNES and SEGA Genesis hardware, and provided an authentic 1980s/1990s videogame undercurrent to the 1960s-inspired jazz writing.  (For more about my creation of NES-style sounds, check out the blog entry about Dark Void Zero.) 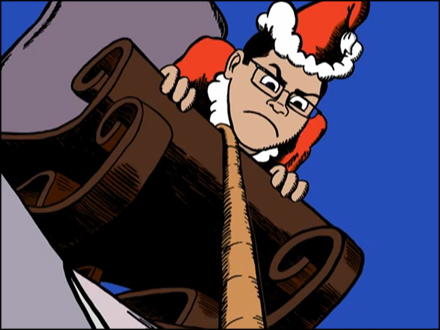 I also added celeste, sleigh bells, piano and harp to create the feeling of “Christmas Music.”  Christmas instrumentation,  jazz scoring and classic videogame sounds were never meant to mesh together, but here the resultant blend of styles works beautifully. They give this score a unique personality. 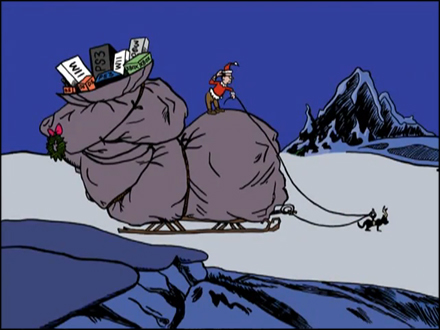 This personality is evident immediately in the first four seconds of the Main Title.  Flutes and clarinets play an upward rip, evoking classic animation scoring.  Sleigh bells and concert chimes enter, bringing to mind traditional Christmas music.  And within seconds, they are doubled with buzzing 8-bit chipsounds, taking us into the world of The Nerd:

From there, saxophones play my original theme, accompanied by Christmas sleighbells and pounding NES drums and bass:

I had a blast with the classic video game sounds in this score.  I’ve had projects with 8-bit music, but few opportunities to mix these sounds together with live, orchestral music.  The results were often surprisingly effective. 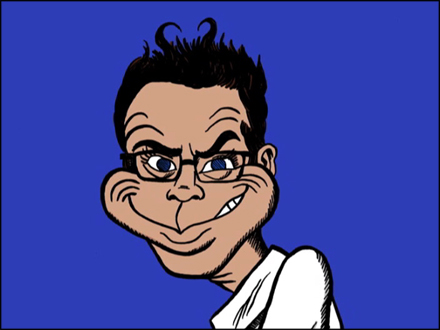 The moment when The Nerd gets his awful idea, for example, is orchestrated in a very traditional manner.  Harps, piano, celeste and sleigh bells chug along in the upper register, while a sneaky, menacing solo builds up from below.  In typical orchestration, this solo would be performed by bassoon or cello, and would sound lovely.  Here, it is instead played on an NES triangle wave:

To me, that triangle wave immediately brings back memories of playing 8-bit videogames on saturday mornings.  But now it functions as just another orchestral instrument!  The sound has extra meaning for people who are familiar with it, but even without that context, it still tells us how slippery and evil The Nerd is in this scene. 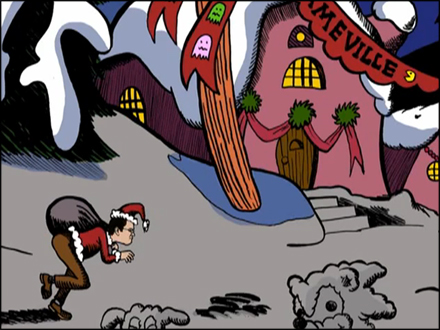 Classic video game synths played an integral part in my arrangement of the song as well.  Listen carefully, and you’ll hear very specific musical references within each verse.  The first verse is fairly traditional, emphasizing the jazz instrumentation, with a subtle layer of videogame synths.  The second and third verses, however, each use specific videogame sounds.  Verse two highlights NES hardware sounds, in an awkward 3/4 meter, evocative of mid-80s titles such as Dragon Warrior.  Verse three showcases SEGA Genesis sounds from the mid-90s, in a funky reggae groove, conjuring memories of Sonic The Hedgehog 3, or Toe Jam and Earl. 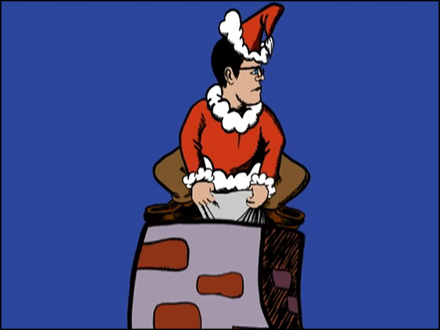 I even tucked several musical quotations into the score itself, including a Christmas classic, “Dance of the Sugar Plum Fairies” by Tchaikovsky.  I used this quote while The Nerd snuck into the village of Gameville to steal games.  However, when he descends down the chimney, James added a well-known sound effect from Super Mario Bros.  Taking that reference to its next logical level, I scored the following scene with a quotation of the underground music from Super Mario Bros, combining it with “Dance of the Sugar Plum Fairies!” 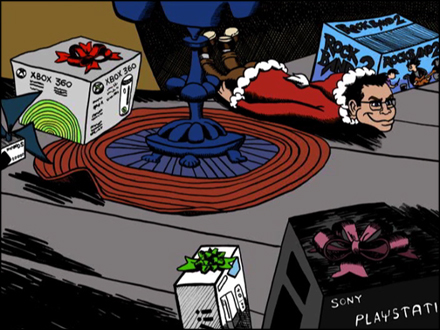 At first, NES synths quote the famous (and surprislingly bebop-worthy) melody.  However, halfway through, the groove stops and an alto flute picks the melody up, completing the phrase.  Again, the musical quotation here works for people who recognize it, but the score still needed to tell a story.  Even if you didn’t catch the reference, this tune was extremely effective in underscoring his sneaky, slithering motions when played as a breathy, expressive flute solo.

(Nintendo geeks take note: the lead synth is modeled after the original Super Mario Bros. release.  The drum groove is inspired by the 16-bit Super Mario All Stars release a few years later).

There are two other quotations in the score.  One of them is obvious and the other is a little more subtle.  Can you guys figure them out?  I’ll give you a hint.  They’re both from the same source. 🙂 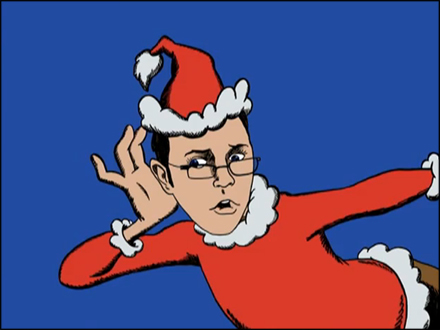 Writing the score using these musical quotations and producing the song parody both let me explore wildly quirky combinations of sounds.  But, the final cue of the review needed to be a little more emotional.  For this climactic moment in the narrative, I set aside all the goofy synths, jazzy elements and Christmas sounds and simply wrote a genuinely emotional piece of music. 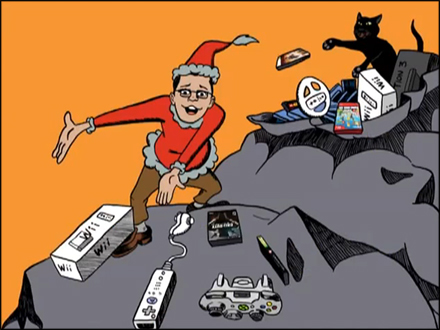 The woodwinds enter on increasingly extended variations of my original main theme, in a traditional orchestral setting.  It’s actually quite lovely!  When I first approached James about writing music for a videogame review, I never thought I’d have the opportunity to compose such a charming orchestral moment. 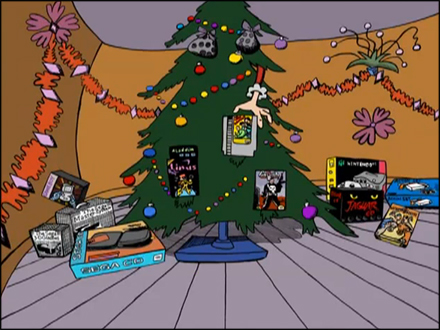 I hope you guys enjoyed watching this video as much as I enjoyed scoring it.  Now, it’s time to unwrap your presents!  Here are free downloads of the complete song and score to “How The Nerd Stole Christmas.”  No Bear McCreary soundtrack collection would be complete without them!

You can listen to them here on the blog…

[audio:https://www.bearmccreary.com/wp-content/uploads/2010/12/Youre_A_Mean_One_Mr_Nerd.mp3|titles=You’re a Mean One, Mr. Nerd]

You’re a Mean One, Mr. Nerd

Thanks for following me along my crazy adventures in 2010.  There are some incredible projects lining up for next year, so check back soon.  In January, you’ll hear my first full orchestral superhero score when “The Cape” premieres on NBC on January 9th. You’ll also hear my score for Knights of Badassdom as well new music for “EUReKA” and “The Walking Dead.”  A “Caprica” soundtrack album is in the works, and I’m hopeful that the Battlestar Galactica Orchestra will hit the road again for more concerts.  So, there will be plenty to blog about.

Have a great holiday and a happy new year!