Tonight the series Human Target premieres on FOX, featuring my original score and Main Title Theme.  This score is arguably the most ambitious, audacious and shamelessly romantic of my career to date.  Unlike anything I’ve done in the past (and 99.9% of everything on television), it is recorded every week with a full orchestra of live musicians.  The sheer scale of this music dwarfs my efforts on Galactica: the average HT orchestra is nearly double the size of the largest group I was ever afforded on BSG.

(Click image above for full-res panoramic.  All session photography by Andrew Craig.)

While working with a full orchestra every week was part of what initially drew me to this project, it is not what makes this series so enjoyable.  The real thrill of scoring Human Target comes from the unprecedented creative freedom I’ve been given to create the kind of sweeping, thematic and adventurous score largely absent from both the small and large screen in recent years.

And while the heart of the score is old school, its not a throwback or a parody.  The arrangements and instrumentation have their roots in classic film scores, but are also simultaneously contemporary with my work on BSG and T:TSCC.  My goal was to create a continuation of classic orchestral scores, not a regurgitation of them. 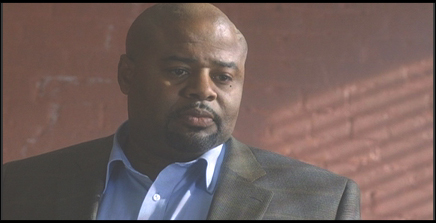 I first met with HT executive producer Jonathan Steinberg last spring, before the pilot had even begun production, or casting was finished.  The early timing of our meeting already indicated the extraordinary priority the music held in the minds of the producers.  We talked about the script, but our conversation continually drifted into soundtrack nerd territory, as I realized that we shared the exact same tastes and passions about film music.

We both agreed that Human Target would survive only if the delicate balance between drama, comedy, suspense and action was struck in the score.  This had been done successfully in the past with adventure films like the Indiana Jones, Lethal Weapon and Die Hard series, and these were the models Steinberg had in mind for Christopher Chance. 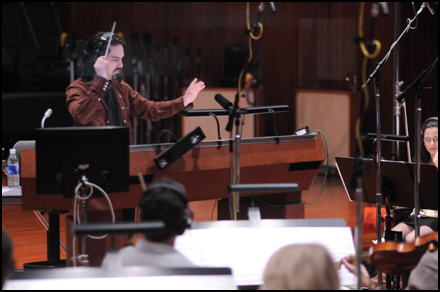 Steinberg told me he wanted the entire series scored with live orchestra.  I nodded and thought to myself: “Sure, dude.  Whatever you say.  You’ll never be able to pull that off.” My internal skepticism was not without warrant. Live television scoring reached its peak in the mid-80s, and since then has been whittled down to a handful of series, most of which are animated (Simpsons, Family Guy, etc) and require very little music per episode. 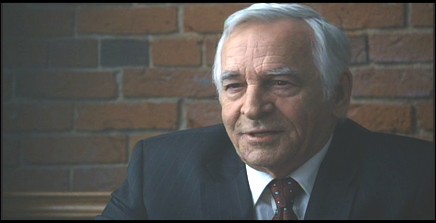 However, to my utter shock, Warner Bros agreed to score the Human Target pilot, even before it had been sold to FOX.  This was an incredible risk for the studio.  Typically, a composer isn’t even hired on a pilot until the studio knows that they’ve got a green light for the series.  But, in this case, the studio was willing to risk a big music budget, having faith that it would be worth it when the pilot blew people away.

This was an incredibly beneficial move for the series, because it gave Steinberg and I several weeks to craft the main theme and focus on key scenes that establish Chance’s character.  During this time, I focused my energy on writing the Main Theme, which I suspected would be the driving force behind the entire score.  We were fortunate to have the extra time last spring for this process, because we ended up going through several drafts.  My initial instincts were always too dark, with clashing, dissonant harmonies reminiscent of BSG or T:TSCC.

Finally, I landed on the melody we agreed captured the tone of the series.  This tune is mostly triumphant and positive, but has an undercurrent of darkness and emotion that allows it to reflect the various sides of Chance’s personality.  I had finally arrived at the Main Theme / Human Target Theme / Chance Theme:

The A-Section feels heroic and triumphant, but is followed by the B-Section that adds more shades of emotion and mystery:

Tonight’s episode serves to introduce us to Christopher Chance, a bodyguard for hire, willing to put himself into extremely dangerous situations in order to protect his client.  Behind his charming confidence lies a mysterious past that will gradually catch up to him as the series progresses.  We also meet his two associates Winston and Guerrero, who help him from the outside. 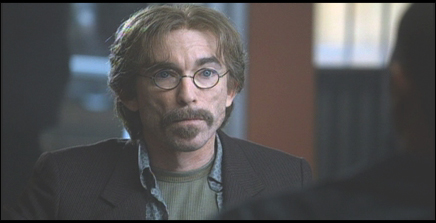 Musically, I had one goal with the Human Target pilot: to firmly establish the Main Theme as the melodic identity of the series.  This theme is woven throughout the entire episode, appearing in various altered forms in nearly every cue.  It is first heard over the title card.  (Fun trivia: every episode will feature a different arrangement of the Main Theme over the title card!) 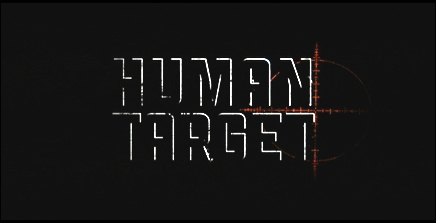 As Chance reveals himself to the crazed maniac he faces in the beginning, we hear the first statement of the Main Ostinato:

This is a ridiculously simple rhythmic pattern that underscores the Main Theme, and functions thematically in places where a melody would be too distracting.  I have been listening to a lot of heavy metal lately and I guess this kind of “chugga-da chugga-da chugga-da” riff was stuck in my head and snuck into the Human Target score before I even realized what was happening.  The metal influence comes full circle at the end of the episode when we actually added electric guitars and bass to the full orchestra, all pounding out this rhythm in unison. 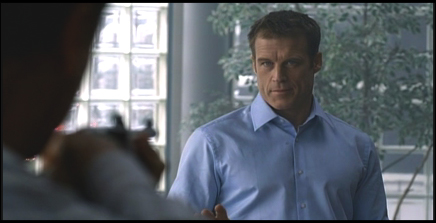 The Teaser ends with the scene where Chance accepts the job to protect Number Six… I mean… Stephanie.  This cue is a great example of how I ride the fine line between suspense and humor.  The music is light-hearted but also serves to gear us up for the adventure to follow.  Its not an “action” cue and not a “comedy” cue.  I guess I’d just call it an “adventure” cue, and much of the score to follow matches this tone. 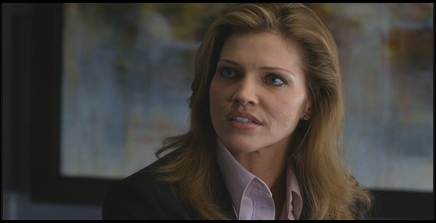 While the main theme is featured in nearly every cue, there is never a moment in the episode where the entire melody can be heard in full, at least in its more triumphant and heroic arrangement. That’s why I’m thrilled that Human Target opens with such a kick-ass title sequence, featuring my Main Theme!

33 seconds isn’t a lot of time to establish a two-part melody, but compared to the average length of TV title sequences these days, its pretty damn astonishing.  And in that time, the beautiful imagery and score really capture the essence of the series. 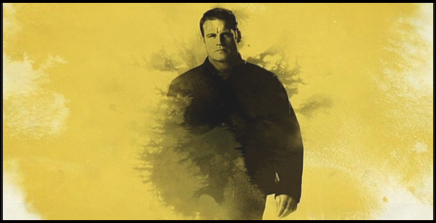 A solo trumpet begins the title, stating the Main Theme as we see Chance step forward from a cloud of ink stains.  The arrangement in the score builds and each hit in the animation is lined up perfectly to the music.  This perfect timing between music and images was achieved because I actually wrote the music first, months in advance, and delivered it to the animators as a guideline.

Finally, the sequence reaches its peak as the score quotes the B-Theme.  Now, the orchestra is slamming, as the trumpets blare out the melody at the top of their register.  This combination of imagery and ballsy orchestral music make a bold statement, that this series is going to be something special.  Chance is not your typical action hero and his music is not your typical electronica-inspired TV scoring.  The title promises that you are about to watch a movie.  Human Target delivers on this promise and will continue to do so with every episode. 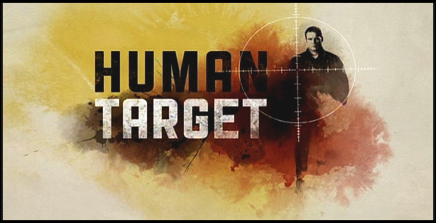 With the theme now firmly established in the title, I was free to develop and adapt the melody throughout the course of the story.  The pilot score weaves variations of the Main Theme and Main Ostinato together throughout the entire episode.  One of the highlights is the massive train fight sequence which took me an entire day to write. 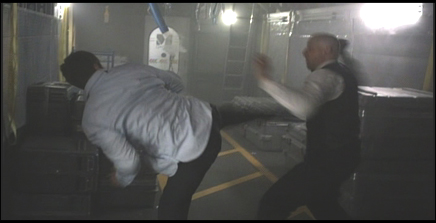 However, of all the cues in this score, there is one that holds an extra special place in my memory: the scene where Chance takes Stephanie’s ring.

The narrative finally settles for a moment, and the intense action music gives way to a bittersweet and longing version of the Chance Theme.  Here, you can hear the other side of his musical personality.  This scene also marks the only time (aside from the Main Title) in this episode that the A-Section and B-Section of the Main Theme are heard together. 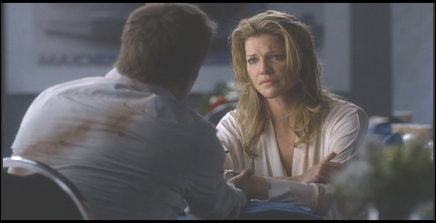 This cue is very special for me, because it contains the single best note I’ve ever written.  That might sound like a weird thing to say, but, seriously, if I had to select one single note out of the thousands (maybe millions?) I’ve composed, it would be the D-natural passing tone in the bass and violoncello line that is heard right after Stephanie asks if Christopher Chance is really his name.

Stumbling on to that note gave me chills when I composed it, and even at the scoring session I jumped out of my chair when I heard it played back for the first time.  Just gorgeous!  And the beauty is amplified because it comes out of nowhere after a relentless 40 minutes of action music.   I love action music, but these are the character-driven moments that make scoring Human Target truly rewarding.

The pilot ends with a final, kick ass Main Ostinato and a surprise cameo (just in case you didn’t figure out how much we all love Lethal Weapon yet!). 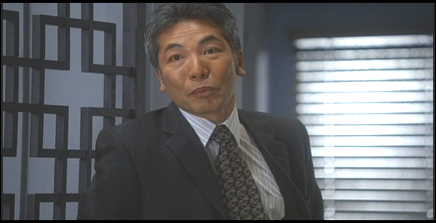 There have been a lot of impressive pilots made for series that ultimately fail to reach the creative heights initially promised.  Human Target will surprise a lot of people because it is not one of those shows.  The next episode is arguably even bigger than this one, and features an even larger orchestra! I’ve seen most of the first season by now and can attest that they continue to get better, and expand the mythology of the characters.  Similarly, the music will also expand, as I introduce new themes with every episode and weave a musical backdrop that has the potential to grow into a rich, nuanced and complex musical world.  I hope you guys enjoy this score and check back each week of this crazy musical journey.

PS: You guys have probably noticed the inclusion of audio clips to the blog.  Special thanks to last summer’s contest winner Arild Wanvik Tvergrov, who’s now helping me with the multimedia side of the blog!  I’m now planning on going back in the next few months and updating the old BSG posts with audio clips.  I told you I’d get around to it eventually!  🙂