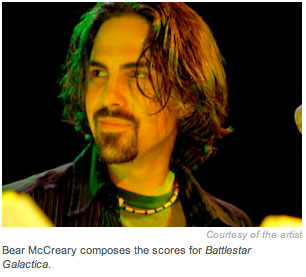 Bear McCreary composes the scores for Battlestar Galactica. He’s conducting a series of summer concerts featuring the show’s music — and the performances are selling out.

“It’s still dawning on me how many people out there are passionate about the music,” he says.

McCreary recently visited the NPR West studios to discuss his compositions with host Guy Raz. He says he draws inspiration from Asian and Middle Eastern music, but he’s also influenced by the orchestral traditions of the Western canon.

His compositions bear little resemblance to the sounds typically associated with science-fiction programs. According to McCreary, the show’s producers wanted to distance the series from the “orchestral bombast” of movies such as the Star Warsfilms.

McCreary says Battlestar Galactica differs from other shows in part because its producers encouraged him to keep changing the score.

“That was an extremely exciting creative prospect to me, because it allowed me to evolve as an artist,” he says.

McCreary’s music changes from militaristic to human and back again. The composer says he takes his cues from the series’ plot development. Once every two weeks, he sits down with the producers to watch the newest episode. Afterward, he goes home to his studio and composes.

McCreary is currently working on the music for Galactica‘s series prequel, Caprica, to be aired on the SciFi Channel.”

And did you guys see this article from io9?  They listed the “10 Best Science Fiction Score Composers.”  This is a pretty damn comprehensive list of brilliant and influential composers: Bernard Herrmann, Louis and Bebe Barron, Jerry Goldsmith, John Williams, Vangelis, James Horner, Alan Silvestri, Danny Elfman, Basil Poledouris… and then there’s me!  This list could be re-titled “Bear McCreary’s Favorite Composers Ever… Plus Him Too.”

Not only am I the only composer here under 50, but I’m also the only one recognized for work in television.  It is an incredible honor to be listed with the greats here, and while I’ve hardly done enough to merit it yet, I will do my best to earn it one day.  🙂