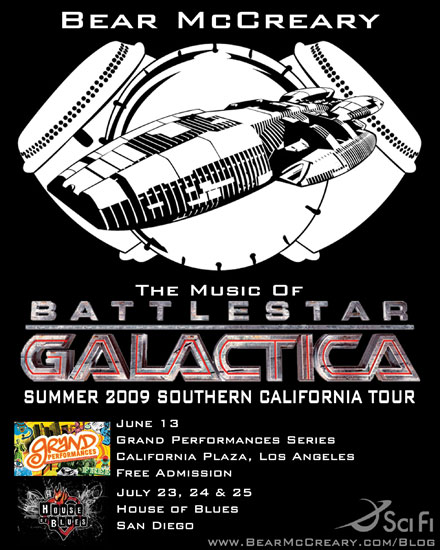 Last year, my orchestra and I performed two SOLD OUT shows at the famed Roxy Theater in Los Angeles and the overwhelming response from fans around the world brings us back to the stage this summer in FOUR LIVE CONCERT EVENTS.

The concert at this gorgeous outdoor venue will be FREE ADMISSION.

We are performing all three nights of the Comic Con convention, a few blocks away at the House of Blues.  These concerts are also the official launch of the BATTLESTAR GALACTICA SEASON 4 SOUNDTRACK, so pick up a copy before anyone else and get it signed by the whole band.

I have more exciting announcements in the coming weeks, which will cover ticket sales info for the July shows, special guests, concert merchandise, and other currently top-secret news that is on the horizon.

I hope to see each and every one of you at one of these events in a few weeks.