Send In Pix and Video from LA Concert Tomorrow! (UPDATED)

What a week!  I’ve been in final rehearsals for tomorrow’s big free concert in Downtown LA.  If you’re in the area, don’t miss this incredible event under the stars.  There will be some VERY EXCITING surprises that I wish I could spoil for you now, but it’s only a day away… might as well save it for tomorrow.

You are all welcome to bring a video camera or take photos at tomorrow’s concert.  If you get some video or stills, I’d be grateful if you could share them with me: the higher quality the better.  After the concert, just leave a comment below and we’ll coordinate with you.

UPDATED: Photography is fine, but DO NOT USE A FLASH! Thanks! 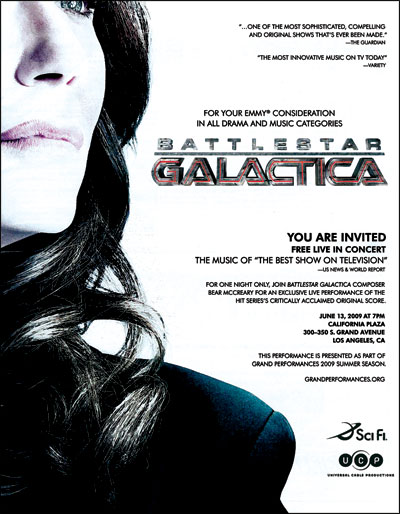 Speaking of the concert, NBC Universal ran this ad in Variety today. “For Your Consideration in all Drama and Music Categories.”  If you guys know any Emmy Voters, tell them to check out tomorrow’s concert!  🙂 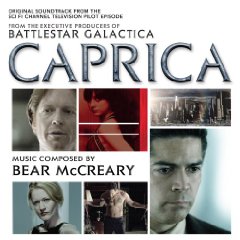 In soundtrack album news, the Caprica soundtrack CD is available and has been garnering some great reviews.  I’ve spent the past 6 weeks toiling over the “Battlestar Galactica: Season 4” soundtrack album and we’re nearly finished.  We go to Bernie Grundman Mastering on Monday and then this crazy musical journey is finally complete!  I will announce the track list and show you guys the final album artwork early next week, so stay tuned!

See you at the concerts this summer!
-Bear