This week’s episode of “The Walking Dead” finally takes us to Herschel’s farmhouse, a location that fans of the original comic book have been waiting for. Carl’s life hangs in the balance, so the entire score is infused with a tense, percussive backdrop that increases intensity throughout the episode.  One of the most featured instruments this week is the drum set, performed by Young Beautiful in a Hurry drummer Bryan Taylor, as seen in this week’s video blog:

DEAD SPOILERS AHEAD: After being shot at the end of last week’s episode, Carl is in dire need of medical attention when Rick brings him to the farmhouse.  I created a simple percussive backdrop that lays behind the entire scene, beginning a tense “ticking clock” idea that will underscore most of the episode:

This percussive bed is achieved using most of the unique instruments that I feature on the score to the The Walking Dead.  The scraping, repeating ostinato is performed on detuned autoharps, scratched with a guitar pick or sometimes a metal beater.

A ghostly hammered dulcimer drifts through the cue as well, offering the music some variation and shape.  And underneath, an electric bass and pizzicato strings set up the groovy 15/8 meter.

Some of my favorite moments in this week’s score are actually the non-percussive sections.  At one point, Andrea is attacked by a zombie in the woods and faces the real possibility of her impending death in a terrifying slow motion sequence.  Here, I layered a dark bed of clustered strings and low-voiced droning synthesizers, which nearly became sound effects.

My favorite orchestral moment in the show, though, is a simple beat when Shane and Otis first approach the overrun high school, on their quest to find medical supplies.  Shanes slowly opens the door of an abandoned police car to pop the trunk and the orchestral strings follow his motion with a spine-tingling gliss:

This orchestral color is easy to orchestrate, but you have to be careful to maximize the dissonance.  I started with the violins, viola and celli playing a dissonant cluster of pitches, then cued a beat where they were all supposed to gliss upwards from their current pitch to a new cluster.  However, if the second cluster was simply a transposed version of the first cluster, then the players would have all glissed up at the same speed, keeping their harmony intact as they moved.

Instead, I spread the voicing out on the upper cluster.  This means that each string player moves upward at a different speed.  As this happens, the chord slowly spreads apart, drifting in and out of tune as it goes.  The result is much creepier, as our ears are treated to dozens of different harmonic clusters in the span of a few seconds.  It may have been a lot of thought to put into one quiet moment of tension, but I think the results onscreen speak for themselves.

The last two cues are definitely the most intense of the episode.  Shane and Otis use flares to distract the zombies and infiltrate the high school.  Here the drum kit, guitars and electric bass create a weird “zombie blues” kind of groove:

Above them, the electric banjo (which tends to represent the zombies) plays dissonant, angular improvised figures while the string ensemble hits heavy tremolo clusters.  It’s creepy, but fun and energetic.

At the end of the episode, Shane and Otis are discovered by the zombie herd and have to make a run for it.  Here, the drum kit really shines, pounding out an aggressive rhythm on the low toms.  Above it, the strings descend in ugly clusters (using the same technique of different speeds of gliss to maximize the nasty harmonies as I mentioned before).  The strings start their tremolo slowly, but they pick up speed until they are chugging away with powerful 16ths, matching the drums and percussion:

Bloodletting finally takes us to Herschel’s farm, but it is just the beginning of our stay here.  This location and its new characters will also give me the opportunity to push the musical boundaries of “The Walking Dead” score even further.  Check back next week for more bloody musical fun! 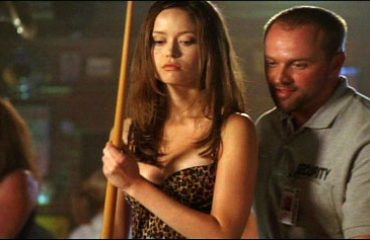 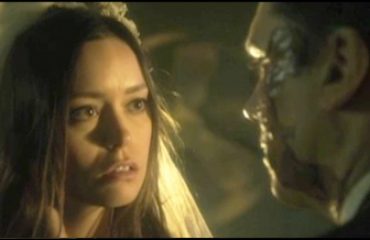