The Walking Dead: What Lies Ahead

Tonight is the long-awaited return of “The Walking Dead” for its second season.  What Lies Ahead is an appropriately-titled episode because this season will build on the momentum and character arcs established in our six-episode first season, and also expand into new settings, new trials and new characters.  Similarly, my original score is rooted in the stylistic language I developed in the first season, and also introduces new themes and instrumentation for the journey.  The season starts off right away with an emotionally-charged cue as you will see in this week’s video blog:

WALKING SPOILERS AHEAD:  This sequence, where Rick sends one last heartfelt message to Morgan, was a real challenge to score.  The first few minutes of this new season needed to bring the audience back into the world, but also generate the excitement of anticipation.  The cue starts off with ambient strings, and slowly introduces new layers as it builds energy.  Guitars, small percussion and drum kit and bass slowly sneak into the arrangement, creating what I hope is the sensation that we’re gearing up for an epic tale.

As the scene comes to a close, the familiar Main Title Theme string ostinato sneaks in:

As with last season, the Main Title music will frequently start before the actual visuals.  In this case, the Main Title strings actually start early enough that the cues blend together.  The incoming G-minor Main Title co-exists with a peaceful and serene C Major and Eb Major chords in the score, which completely re-harmonizes it.  This gives the Main Title ostinato a whole new emotional quality:

I love taking something so familiar as the Main Title theme and giving it a subtle, but powerful, harmonic make-over.

The rest of the score to What Lies Ahead is much more understated, sometimes blurring the line between sound design and music.  The sequences out on the abandoned highway provided incredible opportunities for the sound effects team (led by the amazing Jerry Ross) and I to work together and create a bed of terrifying textures that were nearly indistinguishable from each other.

Jerry and the sound effects team layered in fantastic metallic creaking sounds, simulating the sound of broken doors and car parts swaying in the wind.  These had a very subtle pitch element, sounding almost like a bowed psaltery or sul ponticello strings.  And I layered in musical sounds emulating the same thing, using an actual bowed psaltery and sul ponticello strings!

The result is a beautiful blend of ambient sound design and music which become nearly indistinguishable from one another.  (The sound team and I also collaborated on the church bells that ring through the forest, drawing our heroes towards the church.)

These sounds are first heard when the caravan drives into the highway wreckage.  The first instrument you will hear in this clip, in the upper frequencies, is the bowed psaltery, an instrument new to “The Walking Dead” score:

In the second half of the clip, loosely-tuned hammered dulcimer (another new sound for the score) sneaks in above a bed of random pizzicato string pitches, creating a fluttery, spidery texture.

However, the score isn’t purely ambient for long.  Once Rick spots the incoming zombie herd, I introduce two elements.  The first is the signature electric banjo sound that I used throughout season one (which I’ve sinced lovingly dubbed ‘Zombie Banjo’).  The second is a heart-beat like pulse from the electric bass and synthesizer:

Above that bed, the bowed psalteries  scrape dissonantly, acting almost like sound effects.  That sound always makes me think of thin pieces of jagged, protruding metal.  (And of course, T-Dog is about to meet one of those pieces very soon!) 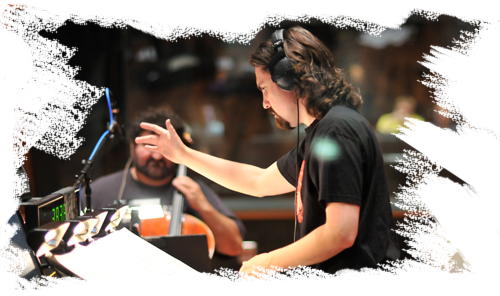 As I discuss in further detail in the video blog, these sounds wash in and out of the sonic texture in waves, suggestive of the ‘wave’ of zombies washing over them.  Each successive wave is a little bigger than the last.

The sequence picks up even more tension when a particularly horrifying zombie (kudos to the make-up crew, casting and actor for this one!) discovers Andrea in the bathroom of the RV.  Here, the string orchestra enters with a downwardly glissing tremolo cluster above a bed of spidery dissonant activity in the lower strings.  This is one of my favorite orchestral moments in the score:

The de-tuned autoharps and hammered dulcimer sneak in again at the end of the clip, followed by another “wave” of tremolo strings and bass heartbeat, but this time the speed is clearly faster.  This is to suggest that Andrea is in real trouble and emulates her growing panic.

The cue finally bursts into an aggressive action beat when the zombie attacks Andrea and she must kill it to defend herself.  Here, the electric banjos, drum kit, psaltery, dulcimer, autoharp, string orchestra and electric bass are all going crazy.

Once Andrea is safe, we cut to Daryl saving T-Dog from being discovered by the zombie horde.  Here, I returned to the bass heartbeat idea, but it’s much more energetic now, because we’re coming out of an intense action scene.  I also kept the energy up because the audience doesn’t know if his plan is going to work, and for all we know, he may get attacked at any moment. I used the electric bass and drum kit to set up a powerful groove and used the de-tuned hammered dulcimers above to create the dizzying tension:

This moment exemplifies my philosophy about the score, and why I enjoy working on this show so much.  None of the instruments are interesting or unusual by themselves.  We’ve all heard bass, guitar and drums play together before.  But, something about this particular combination really sounds like “The Walking Dead” to me.  There’s an element of “zombie-bluegrass” in every cue here, and it’s just delightfully fun to write!

What Lies Ahead is not all suspense and action music, however.  This episode provided me some fantastic opportunities to explore characters as well.  A heart-wrenching scene between Andrea and Dale, confronting her attempted suicide in the last episode, really let me explore the darker side of her character.  I encouraged the string players to give me a little more vibrato, warmth and emotion in their performance and it really sets the sound apart from the stark, cold sound of the horror cues:

(That high sound in the beginning of the clip is the bowed psaltery again, drenched in reverb and delay.  So beautiful!)

The final cue of the episode is also beautiful, but in a much more restrained manner.  Rick’s son Carl sees a deer and is drawn toward it, momentarily forgetting the mayhem around him.  It’s a magical moment and needed a particularly light touch.  The timbre of this cue is reminiscent of “The Mercy of the Living” from the pilot, and that was quite intentional.  Both scenes are about finding humanity in the midst of apocalyptic circumstances.

Scoring What Lies Ahead was a rewarding experience for me, because I needed to find new sounds, new instruments and new harmonies for this series.  But, I had to incorporate them in a way that would still preserve the soul of the score.  I think it worked beautifully, and it laid the foundation for my work on the rest of the season.  In the coming weeks, you will some more new instruments and some truly exciting musical moments.  As always, stop by here after the episode airs for new blog entries about each one, as well as new announcements and other fun stuff.

For those of you who may be returning to the blog for the first time in a while, check out the new site!  There’s now a FORUM here and I hope everybody who’s left comments in the past will sign up and get to know each other.   In fact, I just started a thread asking for suggestions for a possible “Walking Dead” soundtrack album, so as the season goes on, chime in and let me know what cues you like.

And, in case you missed my last blog entry, I will end with something to really get you in the “zombie mood.”  This is “I Don’t Want to Die a Virgin,” my directorial debut music video for Young Beautiful in a Hurry:

See you next week!

PS: Thanks to Andrew Craig for the session photos!