Here’s the latest installment in my seemingly endless series. If you missed the others, they are here: Part One, Part Two and Part Three.

Up to this point, I’ve discussed many of the small musical “building blocks” I use to build the eccentric log cabin that is the Galactica score. Duduk, electric fiddle, bagpipes, taikos, yialli tanbur, bansuri, erhu, rock band and more have all contributed to the sonic texture.

But, occasionally, the score will open up to include the symphonic string orchestra. These are the pieces I will discuss in detail here. While the duduk solos and fiddle melodies are easily lost beneath the dialog and sound effects, these orchestral pieces are unmistakable and stand out as bold musical statements.

Michael Rymer (director of miniseries and many subsequent episodes) deserves the credit for first eliminating the orchestra and then bringing it back to Galactica. While initially discussing the music for the miniseries with composer Richard Gibbs and myself, he knew he wanted something that would totally stand out from the traditional orchestral science fiction score.

As the series developed throughout the first season, I continued where the miniseries left off, scoring each episode with a mixed ensemble of ethnic soloists and percussion. When Rymer returned to direct the season finales, Kobol’s Last Gleaming Parts I and II, he again wanted a score that would stand out…

… and this time it meant bringing the orchestra back. In setting Passacaglia against the opening montage of Kobol’s Last Gleaming Part I, it suddenly felt fresh and new. Were the whole show scored with orchestra, an impact like this would be totally impossible.

Learning from that successful first experiment, we continued to use the orchestra as sparsely as possible. To save the sound of classical strings for only the most powerful, emotional moments preserves its immediacy and resonance with audiences.

The following is a break-down of the orchestral themes of Battlestar Galactica:

This theme, named after the Italian musical form it fits, was composed for the opening montage of Kobol’s Last Gleaming Part I and re-appeared during Baltar’s vision of the Opera House in Part II. It also reverberates throughout subsequent visions of the hall, including in Scattered and D’Anna’s near-death experience in Hero.

Since Passacaglia served as the introduction of the Kobol storyline, logically it could also serve as the conclusion. I brought it back in Season Two’s Home Part II, for the montage where Roslin and her team struggle to find the tomb of Athena while Adama makes plans to reconnect with them.

The events of Kobol’s Last Gleaming continue to haunt us throughout Season Three and beyond, so I wouldn’t be surprised if this theme re-surfaces from time to time. 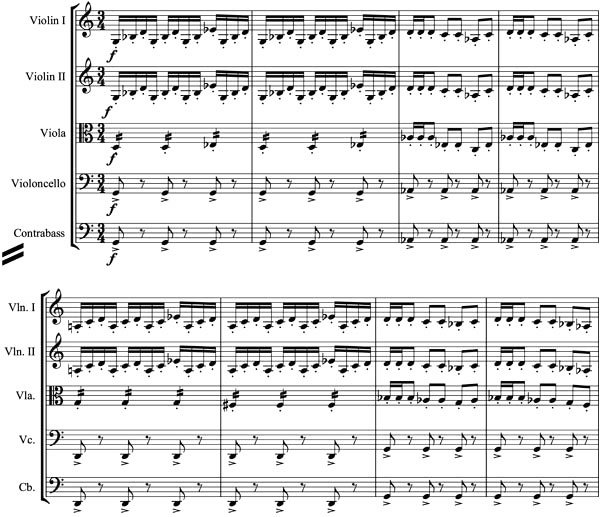 By the time I scored Pegasus, we had used the orchestra a few times. But it had always been as a stand-alone ensemble, completely separate from the bombastic drums and haunting ethnic soloists that make up the rest of the Galactica score. Prelude to War presented my first opportunity to use the strings and the other instruments together.

Foregoing the typical, lush string sound, I orchestrated extremely aggressive, marcato lines. I tried to think of the strings as another element of the percussion ensemble. The result was a sound that felt appropriately orchestral, but still retained the eccentric qualities of the rest of the score. After Pegasus, I was thrilled with the opportunity to bring the theme back for incredible action scenes in next two episodes.

Given the full-blown battle sequences of Resurrection Ship I and II, I was really able to have fun. Combining the strings, soloists and taiko drums was a thrill, but it was also surprisingly effective to let each instrumental group trade off. This was most effective against Lee’s floating and suffocating in space, where the bombastic battle drums suddenly give way to an elegant, contrapuntal cascade of orchestral strings.

The finale of Pegasus, and the battle sequences of Resurrection Ship I and II combined to form the Prelude to War track on the soundtrack.

This theme was developed directly out of Prelude to War. I first took the aggressive string ostinato and spun it into a slow dirge as Starbuck prepares to assassinate Cain in Resurrection Ship II. Much of this piece ultimately found the cutting room floor as the sequence was re-conceived. However, I kept the idea on the back burner and developed it into a new work, creating the season finale’s Worthy of Survival.

While the accompanimental figures come from Prelude, the melody (printed above) is wholly original to this theme. First stated on a lonely duduk, and then in octaves by the violins and violas, it is a melancholy and contemplative tune.

Perhaps that was why it seemed fitting to bring it back in Season Three’s Exodus II, for the painful scene where Tigh poisons his wife. For this new cue, I developed the rhythmic ostinato even further (it now bears little resemble to the original Prelude to War riff) and re-orchestrated the piece. The solo duduk and strings still carry the melody, but all traces of powerful, driving percussion have been stripped away. The result is a hypnotic and repetitive dirge that plays out as we witness Tigh do the unthinkable.

The score to Unfinished Business was inspired by Passacaglia and The Shape of Things to Come. It needed to be epic and lyrical, but I also realized it required a unique theme to take Lee and Kara’s relationship into uncharted territory. Thus, their love theme was born.

Keen listeners will pick this tune up as a thread running throughout the entire episode, mostly stated by the violins, set against an energetic viola / cello ostinato. However, the duduk, bansuri and Irish whistle all have a moment with it as well. The rolling 6/8 backdrop and lush voicings make this melody one of the most unabashedly lyrical in the entire series.

How could the Orchestral Theme blog be complete without this bad boy? Composed by Stu Phillips for the original series in the 70’s, this theme has come to represent Battlestar Galactica for an entire generation of fans.

It’s appearances in the new series have been few, but extremely memorable. In the miniseries, we got a hint of it during the de-commissioning ceremony. However, in Season Two’s Final Cut, I had the opportunity to work directly with Stu Phillips and create a new version of this classic theme. I combined the traditional orchestra with the taikos and duduks of the new score to create a version that bridges the gap between the old show and the current one.

Well, there’s Round IV! Another one or two of these and that should just about cover all the major themes up to this point…