When looking for the musical soul of a new project, I frequently turn to unusual instruments. When you listen to Black Sails, one of the sounds that forms the foundation of the score is actually an instrument we are all familiar with: an upright piano. Along with my engineer Steve Kaplan and piano tech Doug Lacy, I put this piano through the paces, as you will see in my fifth Black Sails video blog:

This particular upright has a long history of music making.  It once belonged to acclaimed composer Miriam Cutler, where it had been in her family for three generations, before she bestowed to it to Doug, who eventually brought it into my studio.  “I wrote almost every song I ever wrote on that piano and lugged it around for 30 years until I finally had to accept it just couldn’t be played anymore and had to make space for one that could,” Miriam said. “Now my piano is a TV star! Thanks Bear for finding it’s hidden talents! What’s next for it’s career?! Should it get an agent?” 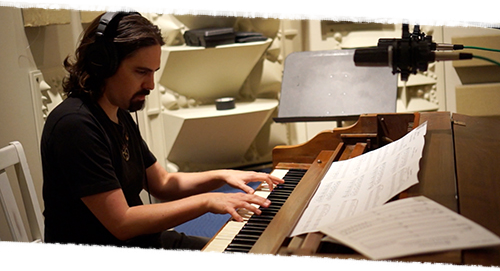 Miriam’s piano certainly is a star. The sound is powerful and piercing, and the perfect complement to the wailing hurdy gurdy, bouncing bodhrán and clacking bones. The piano is featured prominently on the Main Title, as well as throughout the score this season, most notably in this week’s new episode, “V.”

MODERATE SPOILERS AHEAD: The piano serves as the primary harmonic instrument for the intense chase, boarding and battle against Captain Bryson and his ship, The Andromache.  These cues are featured on the soundtrack album in track 14, “The Andromache.” 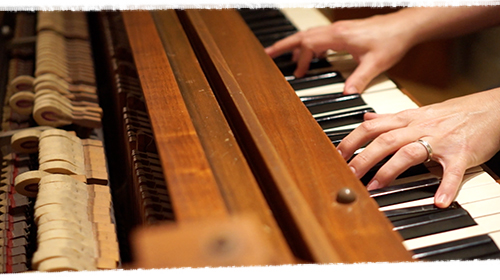 Throughout the episode, you will hear escalating variations of The Andromache Theme:

As you can hear in the video blog, the left hand of the piano is doubled with pounding heavy percussion, while the upper line is doubled by slithery fiddle and string quartet.  The wacky tuning in the upright piano gives this action cue a unique color that sets it apart from the rest of the season.

Even though the most memorable moments drive the action forward for Flint and his crew, our primary character themes are still woven throughout the episode.

The elegant melody reminds us that Flint’s intentions are noble, and that he believes the ends justify the means. However, increasingly this theme occurs in scenes where his crew doubts him.

The mystery of Mrs. Barlow is expanded upon in stories spread by the crew.  Here, a solo viola offers mysterious statements of The Barlow Theme:

“V.” contains my two favorite cues of the Vane Theme in this season:

The first scene sets up his realization that he posses the inner strength to go out on his own. I took this opportunity to play against expectations and underscored this realization not with building drums or big strings and instead featured a gentle guitar and mandolin pattern, above which the string quartet quotes his theme. The moment is surprisingly delicate and introspective, but works perfectly to draw us into his mindset.

The biggest Vane Theme moment in this episode comes towards the end, when he embarks on his personal quest. Driving percussion and chugging string quartet chords establish a rockin’ 6/8 groove. A solo hurdy gurdy wails his theme, against full accordion chords. In another universe, this scene could have easily been scored with a full orchestra charging away. Compared to that particular approach, this cue feels very raw and jangly. But, in the context of a more stripped down score like Black Sails, this passage now feels huge. Both of these Vane Theme cues can be heard on the soundtrack album in Track 16, “Vane’s Visions.”

There is a delicate scene between the victimized Max and Bonny, who is developing empathy for Max’s predicament. Here, the hurdy gurdy drones a gentle texture, against which the string quartet plays very slow, delicate harmonic changes. Played by a full orchestra, this passage might feel too sentimental for a scene dealing with such harsh subject matter. With just four string players, the reedy tones of bows against the strings offer a stark realism that prevents the chords from descending into sappy emotion. The moment is lyrical, yes, but also cold and disturbing.

One of my favorite musical moments in “V.” comes when we go below deck and see Captain Bryson in his element. Despite the fact that Flint bears down on him, he is perfectly calm and simply attends to business as usual. For this scene, I wrote a solo viola line for Paul Cartwright and told him to exaggerate his playing technique to emulate the sound of a Chinese erhu. The sound is peaceful and meditative, however the harmonies the string quartet provide a dissonant backdrop that suggests Bryson is ready to pounce when the time is right.

“V.” also introduces my least favorite moments in the series, not because they’re narratively inappropriate, but because their abhorrent subject matter made me miserable while working on them. We reveal that Mr. Scott has been traded into slavery and is on board The Andromache. There are several subplots in Black Sails that forced me to confront disturbing aspects of humanity, and this was the most challenging for me to deal with. I got a pit in my stomach whenever I had to score scenes dealing with the plight of the slaves.

I channeled that negative energy into my writing and composed the most dissonant and horrifying tones I could muster. In the cues below the decks of The Andromache, the quartet plays shrieking sul ponticello clusters (a technique of playing near the bridge to create artificially high and glassy sounds). Beneath them, the hurdy gurdy and bass drone with ominous dread. I felt it inappropriate to write a melodic theme for the slaves, but I use this style of dissonant writing for thematic purposes throughout the rest of the season when the show references this story arc.

The episode ends with a shocking moment that I won’t spoil in case you’re being bad and reading this before having seen the show. Let’s just say an explosive is involved.  As we inch closer to the detonation, the music gets increasingly creepy. The chugging violin strings sound like nails on a chalkboard and I asked electric bassist Pete Griffin to really crank up the fuzz on his bass. The tension builds to a fever pitch. The final moments of the string quartet tremming into a dissonant cluster is pretty horrifying.

“V.” is the most action-packed episode since the pilot, and the series continues to get more intense from here.  I’m very excited for you guys to see next week’s video blog, in which I’ll introduce the rowdy singers of Sails. See you then! 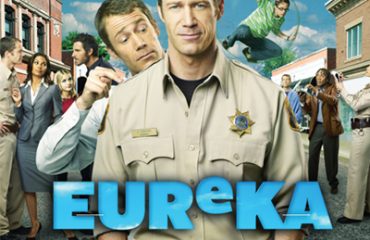