ONE NIGHT ONLY: On October 24th, the Golden State Pops Orchestra will perform a special tribute to composer Stu Phillips to commemorate his 80th birthday.  He will conduct his scores from the original Battlestar Galactica, as well as several other projects.  Richard Hatch and other new and original BSG alums will be there, and I will be there as a special guest, conducting my new arrangement of Stu’s classic theme!

My piece will be a combination of the various moments in my scores in which I quoted Stu’s timeless melody, drawing from “Colonial Anthem” from Season 2, “Husker in Combat” from Razor and, of course, “The Heart of the Sun” from the final episode.  Some of my own, original BSG themes will weave in there as well.

If you missed the summer concerts in downtown Los Angeles, San Diego, or my ballet, Prelude to War, in Germany last spring, this is your last chance this year to hear my Galactica score performed live in concert.  Since the concert program also includes Stu’s “Theme from Battlestar Galactica,” I want my “Colonial Anthem” to have all the unique qualities and sounds that set my score apart.  So, the orchestra will be joined on stage by BSG Orchestra superstars Paul Cartwright on electric violin, Chris Bleth on duduk and M.B. Gordy on taikos and ethnic percussion. (UPDATE: The line-up has changed.  See the bottom of this entry). 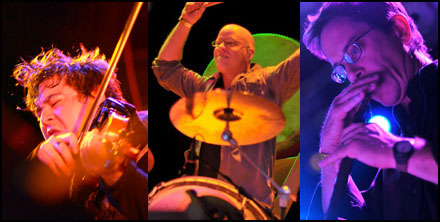 And even if you did see any of the previous shows, this one will be entirely different, since it involves a full orchestra!  This concert will truly be a once-in-a-lifetime opportunity to experience the classic and re-imagined Galactica scores together on one program.  There will also be a drawing to win CDs and other goodies signed by me and Stu. 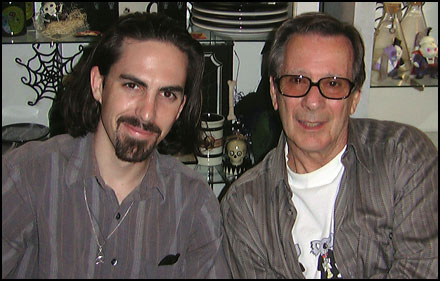 I’m guessing a few of you loyal blog readers aren’t familiar with the original BSG series or Stu’s remarkable music for it.  I asked Stu if he’d do an interview for us, so you could learn more about him and his long career directly from the source:

Bear McCreary: What is your musical background prior to working in film / television?

Stu Phillips: I was fortunate to have attended a high school in New York called “The High School of Music & Art.” (now known as “the LaGuardia school of performing arts.”) it was there that I really became enamored with music. Aside from piano, I studied clarinet, and became quite proficient, performing the Mozart “clarinet concerto” with a symphony orchestra at the age of 16. I spent a great deal of my early career playing piano in bars… Accompanying singers… On the road as musical director for some singers… Doing record arrangements, and eventually as a record producer, where I was fortunate to have produced three #1 million record sellers.

Bear: How did you get involved with the original BSG?

Stu: I had been working with Glen Larson since 1974 on four different TV shows. When the “BSG” project came to fruition, he suggested me to universal as the composer. They were reluctant at first to agree to my doing the music, wanting to hire a “big name” composer, but Glen was insistent and I was hired.

Bear: At the time your score was probably among the most large-scale and epic scores on television.  To this day, very few television scores rival it.  Was it difficult to convince the studio to make the score this big, or was it an obvious decision for them? 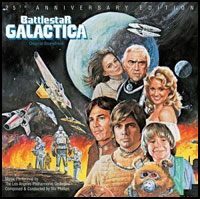 Stu: Actually, the studio had almost no say in what the music to the film/tv show would be like. This was decided by Glen and myself. Glen, obviously trying to compete with “Star Wars,” wanted some big symphonic music. I heartedly agreed. What composer wouldn’t. Many people are not aware that about three hours worth of film was tracked personally by me and Don Woods, my music editor, for the presentation. It was tracked with classical music plus some Stu Phillips cues from other of my films and TV shows. In several instances, I ,unfortunately, backed myself into a corner, having pleased the network brass and glen with many of my musical choices, that I was forced to compose similar sounding cues for the final cut. The choice of the LA Phil was sort of the result of a three way discussion between Glen, Harry Garfield and myself.

Bear: Were you involved in the amazing disco version of the BSG Theme?

Stu: Yes… Absolutely. We recorded, the entire 6 minute piece in one day from 1:00pm to 11:00 pm… Overdubbing the different sections of the orchestra one at a time. Michael Boddicker was my co-producer and laid out some of the rhythm tracks.

Bear: What are your favorite themes from the original BSG score?

Stu: I think that I captured the deep sorrow and remorse of Adama’s loss of his family. “Adama’s theme” is one of my favorites. Also a love theme that I wrote for one of the episodes. 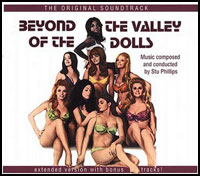 Bear: Any thoughts on why the score has resonated for so long and so powerfully in the memories of fans?

Stu: Ahh! If we knew the answer to that question, every film composer would be a genius. If I had to speculate, I would say that it was the thematic content of the music, and the fact that many of the original eight themes, in varying forms, were utilized throughout the entire series. And, listeners were probably amazed that every week they heard a score that seemed to be on a par, sound wise, to the original LA Philharmonic tracks from the pilot.

Bear: What was it like for you finding out that your themes would be appearing in the new BSG despite the fact that the tone of the new score was so radically different than the original show?

Bear: What is your favorite project you’ve worked on?

Stu: I would have to say, definitely BSG is one of them. Some others would be “Follow Me” (a surfing picture with a very un-surfing score.)… And “A Time to Every Purpose’ (currently titled “Pickup on 101.”) 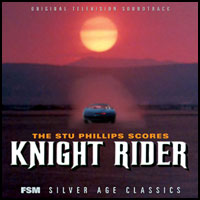 Bear: The Theme to “Knight Rider” kicks ass.  That’s not really a question, just an observation.  But seriously, that piece is equally timeless as the BSG Theme, but its written in a totally different style.  Which language comes easier to you, the orchestral or synthesizer language?

Stu: One would think that it’s natural to be more at home with an orchestral score, given my classical background. However, to toot my own horn a bit… I was one of the early users of synth type instruments, all the way back to the novachord. In 1968, I wrote a orchestral score utilizing the original moog synthesizer which was played by Paul Beaver. (the instrument was about 10 ft. Wide and 8 ft. High) all through the 1960s I was always on the lookout for new ways to produce new sounds. About ten of the 96 episodes of “The Fall Guy” that I wrote were all synth driven, except for the rhythm section. (oh yes! The “Knight Rider ” theme was one of, if not the first, all synth themes on TV. It predated “Miami Vice” by about 6 months.

Bear: And to get nerdy and technical for a moment, how did you pull off those iconic synth sounds in the KR score?  Were they sequenced via MIDI or played back by multiple keyboard players live?  What hardware was used?

Stu: There were four synth players on the KR theme. Nothing… I repeat… Nothing was sequenced. Some of the sounds were not synths, but percussion sounds. You would have to talk to Mike Lang… Ralph Grierson or Randy Kerber about the instruments. I really can’t remember what they were.

Bear: You recently wrote a book about your experiences.  Is it still available? 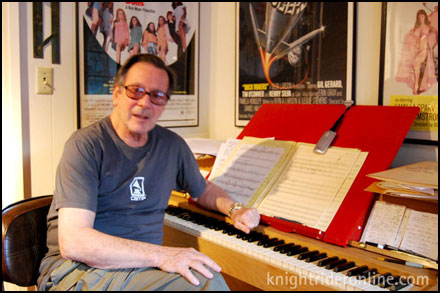 (image borrowed from KnightRiderOnline, thanks!)

Bear: How did this concert with GSPO come about?

Stu: I was invited to guest conduct my orchestra setting of the “Twilight Zone” theme at the 2008 GSPO October concert. After that, Steve and I talked about doing a concert featuring some of my own music. I had just met Robert Theis, the piano soloist at this upcoming concert, and he had agreed to add my “variations for piano and orchestra” to his repertoire. I played Steve the recording of the piece and he loved it. From there it was all downhill to now. The birthday celebration was an extra added goody. 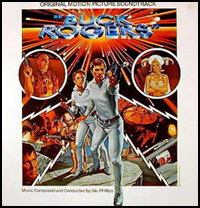 Bear: What other scores of yours are we going to hear at the Oct. 24th concert?

Stu: A new suite of music from “Buck Rogers”… Excerpts from a film titled “The Name of The Game is…kill!”… “Knight Rider” and some BSG music from some episodes.

Bear: Tell us about about the piano concert we’re going to hear and what inspired you to write it.

Stu: It’s a very long story. It was originally conceived as a concerto for four basses. Dennis Trembly of the LA Phil had asked if I might take a shot at writing something for the contra bass. When it became obvious that trying to get four competent bass players together for rehearsals was going to be a problem, I gave up on the project. The music laid around in a carton for several years, until one day, when I was reorganizing things, I came across the music. When I revisited the score I thought, “what a waste of ideas.” so I began rewriting the music as a set of variations for piano. In 1998 I recorded it at the Skywalker ranch with a symphony orchestra and a 16 year old pianist.

Bear: This is music that was written to perform a function against picture.  Yet audiences continually flock to live performances of soundtracks.  Why do you think film / tv music works so well in the concert hall?

Stu: I would have to amend your question with “some tv/film music works so well…”

Good music is… Simply put… Good music. Whether it be for film… Concert Hall or records. If an audience can relate to Mozart or Rachmaninoff… Why not Williams… Mancini… Barry… Or for that matter, McCreary or Phillips?

Special thanks to Stu Phillips for the insight and for inviting me to be a part of this remarkable event.  I’m honored to be involved.  I hope to see some loyal BSG fans out in the crowd and that when the music stops, we’ll hear some rowdy chants of “SO SAY WE ALL!”

Due to a scheduling conflict, regretfully violinist Paul Cartwright will not be able to perform at this concert.

However, I’m very excited to announce that our third guest soloist will be none other than Steve Bartek on electric guitar!