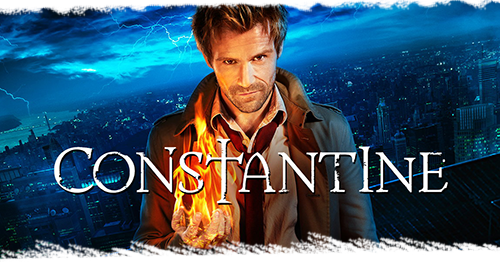 Last spring, David S. Goyer told me about his new pilot for NBC, Constantine. I always loved the DC Comics’ “Hellblazer” antihero for his unique blend of attitude and power. I could imagine nothing more fun than working with David Goyer again, after two successful season of Da Vinci’s Demons, to bring John Constantine to the screen. 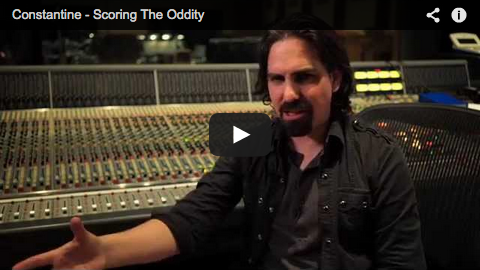 CHECK OUT MY VIDEO BLOG HERE!

I was immediately struck by how closely director Neil Marshall paid tribute to the original “Hellblazer” comics’ dark and gloomy tone.  From the beginning, I knew I would need to write dissonant horror music. I brought in the Calder Quartet (with whom I’ve worked on a number of series at this point) because I knew they would be able to provide the sounds of classic cinematic tension: clustered tremolo chords, scraping sul ponticello lines and scratching glisses. 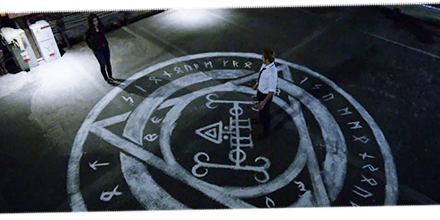 To only write horror music, however, would ignore what makes Constantine special. John Constantine is a fascinating protagonist because he frequently finds himself in terrifying surroundings and somehow, he is rarely terrified. More often than not, he is in control, manipulating others around him. He is mischievous. His score would need to reflect these qualities. That’s where the drum loops and harpsichord came in handy. 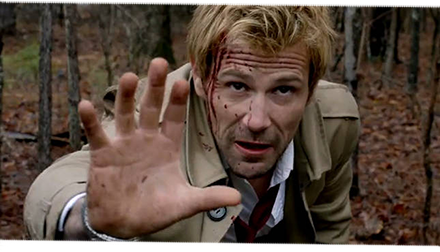 In the comics, Constantine had a punk band in the early 1980’s (the band name, Mucous Membrane, was referenced in the third episode). However, I found that the punk rock genre was inherently not useful for scoring this series. It’s not a sound that lends itself to brooding atmosphere. Instead, I referenced the popular music of the 1980’s by adding old school drum loops from the late 1980’s / early 1990’s, and distorted basses. These elements contributed a sense of attitude and fun to the moody horror score. Playing against John as he struts into a dark alley and lights his hands on fire, these sounds instantly gave the series a unique tone, allowing the audience to cheer if they wanted to. However, something was still missing.

Enter the harpsichord. Something about the harpsichord playing a simple little melody against the dissonant strings and distorted drum loops clicked for me. The instrument is old and anachronistic. I think about ghosts when I hear it, because it is a bit of a ghost itself. Once I combined the horror elements, drum loops and harpsichord, I had the Constantine Theme:

While this melody is the primary theme in the series, there are several others required to fully capture John’s character. The harpsichord theme and drum beats represent his sense of control, so it was important that I do something different when he loses control. A good comic book hero is defined by his or her weaknesses, and Constantine is no exception. 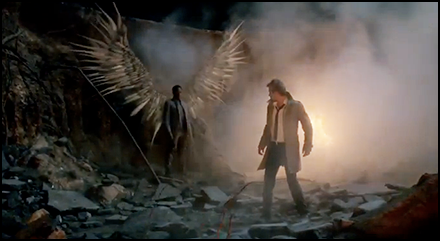 Throughout the series, you will hear references to an event that happened at Newcastle, where he failed to save the soul of a girl named Astra. Since then, he has been damned to Hell, and remains racked with guilt. He struggles to even talk about it. I score these scenes with the Newcastle Theme:

This theme resonates with John’s conflicted feelings about Newcastle, and represents his inner insecurities and guilt. 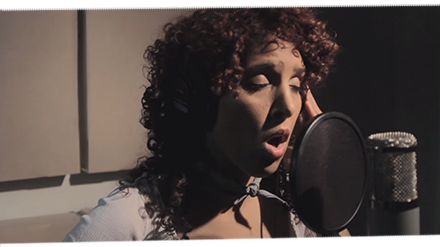 The Newcastle Theme is most frequently heard in a haunting angelic vocal, performed by Raya Yarbrough. By singing without vibrato at the upper limits of her register, Raya can emulate the sound of a boy soprano. This gives her vocal an uniquely spooky tone in this context, since John is mourning the loss of a child. (Composers, do not try this at home without closely talking to your singer first, it is very difficult!)

The Newcastle Theme is introduced in the pilot, and developed into a moving variation in the climax on the rooftop when John nearly gives in to a demon posing as Astra. 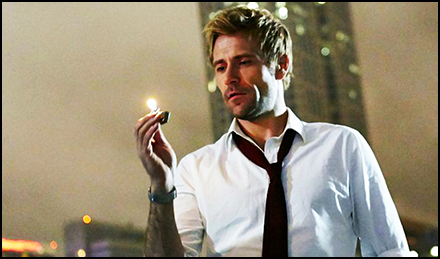 The fourth episode, “A Feast of Friends,” is where I push the Newcastle theme to the forefront. “A Feast of Friends” is a retelling of the first issue of “Hellblazer.” The episode gave me the opportunity to write for a larger orchestra and push the score into truly operatic territory. The final act has everything composers dream of: betrayal, love, noble sacrifice and loss. It was a joy to score, because I could interweave the Constantine Theme with soaring statements of the Newcastle Theme, swirling with the drum loops, harpsichord, vocals, string quartet, orchestra and distorted synths into a symphonic finale. This is the episode where I fell in love with the show.

Constantine has also provided me unusual musical opportunities.  The third episode, “The Devil’s Vinyl,” told the story of Willie Cole, a blues musician who made a deal with the devil, based on the urban legend of Robert Johnson. The episode required that we hear Cole’s blues song, recorded in the 1930’s. When the writers told me about it, I knew exactly the musician to bring in: Martin Yarbrough. 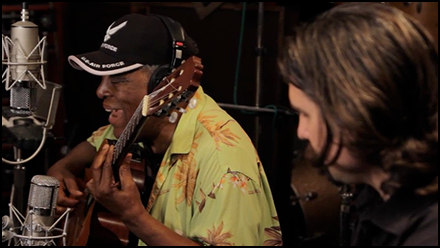 Martin Yarbrough is a well-known folk and blues singer, who put out several albums on Chess Records in the 1960’s, and has worked with Earth, Wind and Fire, Shaka Kahn and many other artists over his long career. (He also happens to be my father-in-law.) He has an unmistakable voice and guitar style, and I knew he would be perfect to create a blues song so good that the audience would believe he sold his soul to the devil to do it! Martin and I collaborated with series writers Mark Verheiden and David S. Goyer to compose “Reaper Man,” the song featured in the episode.  Martin’s soulful voice and distinct blues guitar technique perfectly captures the spirit of the character.

I have been looking for a chance to work with Martin for years, waiting for a producer to ask me to find the coolest old blues guy in the world. Constantine finally provided that chance! The session was especially fun because it marked the first time my daughter Sonatine came to a recording session, so there were three generations of Yarbroughs in the studio making music. 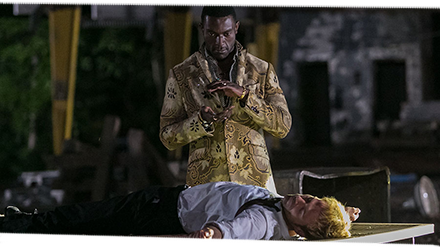 The third episode also introduced one of the most beloved characters from the comics, Papa Midnite, so I wrote him a theme:

The Papa Midnite theme injects a flavor of world music into the score. His melody is played on three unusual ethnic woodwind instruments: the Armenian duduk, the rarely used classical heckelphone, and the Spanish Tarota. These three instruments are all reeded woodwinds that have vaguely similar sounds, but wildly different characteristics and history. I asked woodwind maestro Chris Bleth to layer each one, creating a chaotic sound of instruments that intentionally don’t blend well together. The result is a distinctly creepy sound that evokes a spirit world. The foundation for the Papa Midnite Theme is a backbone of voodoo drum rhythms played on congas, djembes and other hide drums, with metallic percussion adding accents. His sound lies in stark contrast with Constantine’s theme, and his presence will always have a big impact on the score in upcoming episodes. 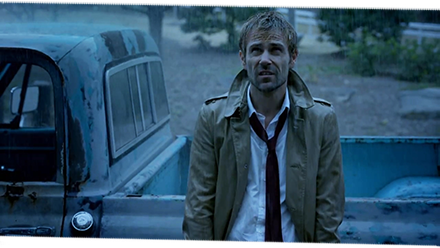 The fan response to Constantine has been everything I had hoped. The series was in the news last week when it was announced that NBC would not be ordering the last nine episodes to production. This set off a series of articles claiming it is cancelled, when in fact, nothing could be further from the truth. Executive producer Daniel Cerone explains it well at this ComicBook.com article, so check that out for details. But, just know the fate of the series is still undecided, and its not yet damned to Hell. So, keep watching, keep the buzz alive online, because now is the moment when we can save the series to live another day. There are still many wonderful “Hellblazer” stories I want to write music for!