Da Vinci’s Demons: The Ends of the Earth 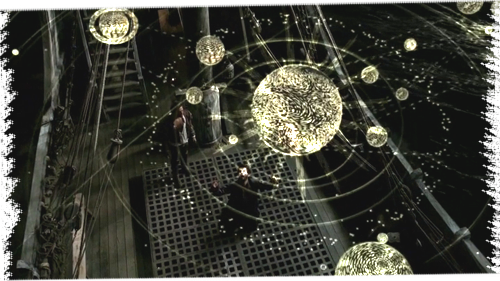 In “The Ends of the Earth, ” all our protagonists are on journeys. Da Vinci and Riario travel aboard ships bound for the new world, while Lorenzo and Piero trek undercover to Naples. Lucrezia’s journey is into the past, as we flashback to the tragic events that defined her relationship with Sixtus and Riario.

SPOILERS AHEAD: The primary story arc in “The Ends of the Earth” revolves around (pun intended) Da Vinci. The Circassian slaves he freed from bondage in the last episode are proving to be a superstitious lot who believe they will fall off the edge of the world if they travel too far from home. Da Vinci must convince them that the world is round and that he knows the secret to navigating by the stars.

I found myself surprisingly moved when scoring Da Vinci’s revelation that the Earth and other planets revolve around the sun. This is one of the things I love about this show. We get to watch Da Vinci make realizations that seem outrageous, like traveling to the new world, or figuring out the true nature of the solar system – things we have no proof he ever did. However, these are feats that were achieved by his contemporaries. In real life, the new world was discovered by Columbus only a few years after the events of this season. Da Vinci would have certainly known people in his lifetime who voyaged there. In fact, Columbus’ voyage was paid for in part by the Medici money we saw loaned to Spain in season one. As for realizing that the Earth revolves around the sun, Copernicus’ landmark book proposing heliocentric theory would be published only about sixty years later than this episode takes place. So, Da Vinci’s accomplishments here are less ludicrous than they may seem.

Da Vinci’s revelations are underscored with soaring variations of the Da Vinci Theme. I needed a new theme, however, to represent the growing threat from the Circassians. I wanted to create a theme that was exotic, ritualistic and meditative, something that felt like it could belong in their religious ceremonies. I used bells and chimes to create simple beds of C minor and Db major. Atop that, I wrote a gypsy-inspired solo guitar line for Ed Trybek, the guitarist who plays all the lutes and various stringed instruments on this score. The Circassian Theme is only heard a handful of times, most noticeably in a somber arrangement at the episode’s end, when only one of them has survived their mass suicide.

I found the Lucrezia flashbacks to be the most emotionally engaging scenes in this episode, and as a result, approached them in a new way. As a viewer, I’ve always felt a great empathy for Lucrezia, even though she has betrayed the ones she loves. These flashbacks reveal what I’d long suspected, that she was manipulated by a heartbreaking tragedy in her past.

Lucrezia’s story arc is scored with three primary character themes.  The episode begins with an ominous statement of the Rome Theme, accompanying the villainous Sixtus as he goes about his morning routine:

The Rome Theme represents Sixtus and Riario, both of whom figure prominently in the flashbacks scenes. Of course, the Lucrezia Theme also is woven throughout these sequences:

The most vulnerable arrangement of her theme occurs after her sister Amelia is killed before her eyes. A solo Celtic harp offers an angelic statement of the theme set against a searing dissonant string cluster in the lower register.

Lucrezia’s father, The Prisoner, also has a theme that is heard during his scenes with Mercuri and Lucrezia:

I was tempted to include the Prisoner Theme in the flashbacks as well, because the scenes reveal how he came to be a prisoner. I ultimately decided not to use this theme in the actual flashbacks, however. I felt that the theme represents him as a frail, old man and I didn’t want to remind audiences of that image when we see him in his papal robes, as a more youthful, adoring father.

My score for Da Vinci’s Demons typically moves quickly, constantly evolving and commenting on every little shift in the narrative. The flashbacks in “The Ends of the Earth,” however, employ more ambient scoring than I typically write on this show. While I still integrated some thematic statements, I relied heavily on ambient drones, long string clusters, and other textures to create evolving moods. This kind of ambient approach gave the flashbacks a more modern, other-worldly feeling, almost as if they are stuck in slow motion. I wanted the audience to internalize that they are watching tragic events that have already happened. The slow-paced score helped create a sense of dread, reminding us that the events unfolding are inevitable. 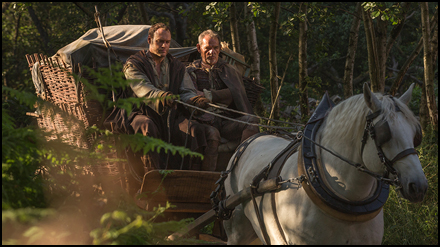 Meanwhile, Lorenzo and Piero encounter a sleazy and potentially deadly preacher who tries to extort them on their way to Naples. The character, played brilliantly by Richard Sammel, is an oily snake. He just oozes corruption. For his scenes, I used crumhorns and hammered dulcimers to create a slippery theme for him. These instruments offered a Renaissance color to the tense string textures and percussion underscoring the bluffing and tense dialog between him and Lorenzo. The character was so fun, I couldn’t resist writing a theme for him, even though he’s dead after a couple scenes.

Speaking of new themes, an important one is introduced in “The Ends of the Earth.” At The Prisoner’s request, Mercuri leads Lucrezia into the Secret Archive to the sword of Ozman Gazi. He tells Lucrezia that the sultan of the Ottoman Empire displays a reproduction of this sword in Constantinople, and that his people do not know the shameful truth that the Vatican actually possesses the original. Somehow, the Prisoner wishes to make use of this sword and Lucrezia is now a pawn in his machinations.

The Ottoman Empire has been a subject of discussion since nearly the beginning of the series. Characters such as Vlad, Sixtus and Ferrante frequently discuss their impending threat. This scene isn’t just about Lucrezia taking a sword. This is a small part in a larger plan that Lucrezia, Mercuri and we as the audience are just beginning to understand. Showing us this sword is the first time the narrative introduces the Ottoman Empire directly, and I knew I needed to write a theme that could be developed further in future episodes.

Obviously, an Ottoman Empire Theme would draw on instrumentation from the region. There was only one problem. As far back as the first episode, I’d already used iconic Turkish instrumentation to represent The Turk!

For Al-Rahim, The Turk, I used a Turkish stringed instrument called a Yialli Tanbur to represent him, playing The Turk Theme.

The melody is exotic and lilting, drawing from Middle Eastern scales. At the time, I did everything I could to differentiate The Turk Theme from the rest of the score, which is traditionally European in its construction. So, all my Middle Eastern musical tricks were taken! Now, twelve hours of narrative later, I knew that the Ottoman Empire Theme could have nothing in common with The Turk Theme, because they are completely unrelated stories. I needed a new theme that feels authentically Turkish, but sounds nothing like the theme I’d already composed for The Turk. 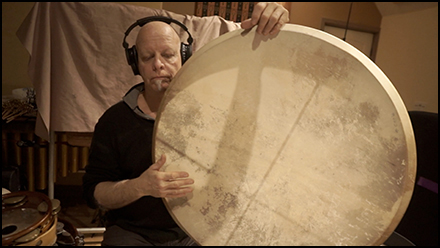 As the camera pans across the sword for the first time, I introduce a distinct 6/8 groove played by percussionist M.B. Gordy, on a trio of Turkish percussion instruments:

A frame drum, a typical hide drum from the Middle East, holds down the primary beats. Between those hits, a jangly Turkish bendir fills out the groove. 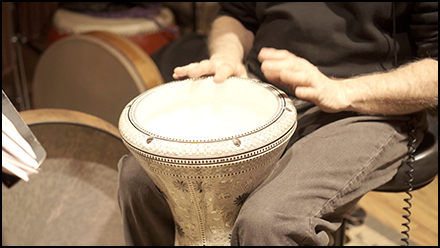 Above them, a darbuka dances with exotic rhythms and fills. I asked M.B. to play as lightly as possible, just barely tapping the drums with his fingertips, so that the percussion would enter lightly, and mysteriously. 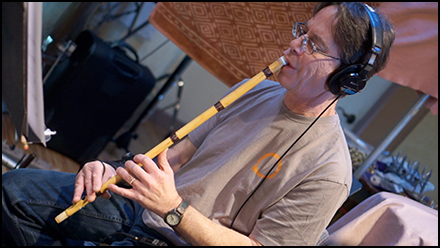 After the initial groove is established, a breathy, exotic new melody slithers into the score. This is a woodwind instrument called a ney, played by resident woodwind maestro Chris Bleth. This melody is called The Ottoman Theme:

Composing this theme was tricky, because the ney has a relatively limited scale, and the tuning on certain notes is peculiar by Western standards. These unusual characteristics are exactly why I was so excited to write for the instrument. To prevent any potential confusion with The Turk Theme, I ensured that the contours were different. The Turk’s Theme is built from descending intervals, starting high and moving down. The Ottoman Theme is the opposite, starting low and ascending upwards.

At the conclusion of “The Ends of the Earth,” Da Vinci is left alone, realizing that his brilliant mind did not act swiftly enough to save the Circassians, casting doubt on himself and his ability to save his friends. This introspective final scene leads into the unique end credits I composed for the episode. An elegant, shifting harmonic passage in the Calder Quartet is broken up with gentle arpeggios in the lute, while the Viola da Gamba offers a variation of the Da Vinci Theme, offset from its usual placement in the chord progression. For the first time, I finish an end credits piece without resolving back to the tonic chord. The music drifts gently to a final V chord. There’s a lack of resolution that’s disconcerting, and yet, the episode ends on a major chord, which feels more uplifting. I hope the musically ambiguous ending allows the audience to leave the episode with whichever emotions they felt the strongest: hope or despair.

The next episode, “The Sun and The Moon” is where things get really interesting, both narratively and musically.  Stay tuned. 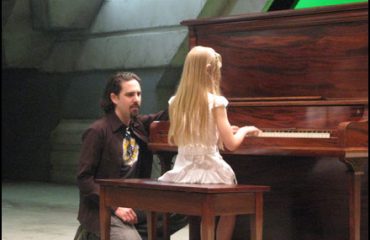