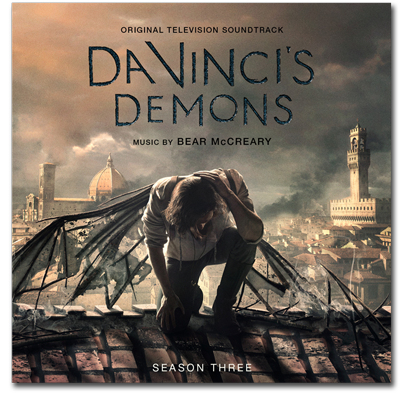 The premiere of a new season is a cause for celebration, and yet for me, this also marks a moment of reflection. The reality that this series must conclude is finally sinking in. Da Vinci’s Demons is one of the most personally transformative projects I have ever worked on, one that is near and dear to my heart. Very few jobs have ever had the kind of lasting positive impact on my personal life and creative energy as this one. I am saddened by its conclusion, but immensely proud of my work on this new season leading up to the epic finale.

When I first met David S. Goyer, at his office in Los Angeles, I had just screened the pilot episode. One of David’s first questions was whether I had time to take on his series. I distinctly remember my answer: “this is a series I would move mountains to make time for.” At the time, I was coming off a successful run of science fiction series and films, and was just beginning to lose faith in myself that I would ever be hired in other genres. I was the “genre guy.” When a producer of Goyer’s talent and caliber offered me a sweeping historical fantasy, I knew it would have the potential to change the direction of my career, though I had no idea at the time how profound that change would be. 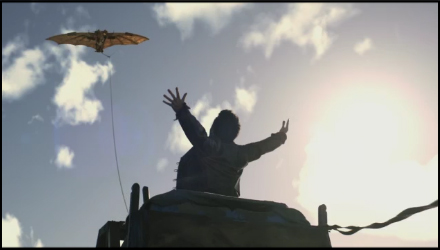 I was hired, and immediately intimidated at the prospect of writing a score both worthy of this exciting series, and worthy of the real-life historical figures who inspired it. To do justice to both, I set out on a journey of personal and musical discovery to Renaissance Florence. Scoring the first season, I was immersed into a rich world of historical fantasy, and tasked with writing over a dozen primary character themes, including memorable melodies for Leonardo Da Vinci, Riario, Lorenzo, and Lucrezia. Most of these themes had to be introduced in the first episode, making it one of the most creatively demanding pilot episodes of television I have ever scored. My next challenge was to evolve these themes, integrating them into the narrative twists and turns of those first eight episodes. 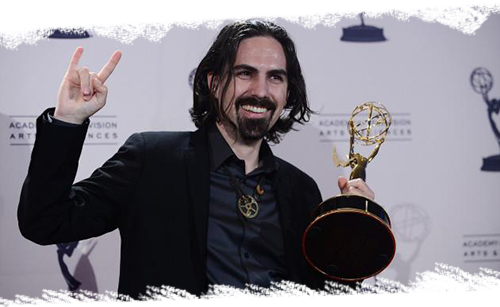 I was honored with an Emmy Award for my Main Title Theme Music, in one of the biggest shocks of my career. And while I adore the Da Vinci Theme, it may actually be Lucrezia’s Theme that gently rolls through the recesses of my imagination whenever I sit at a piano. This was the kind of thematic writing I had grown up adoring: rich, clearly defined character themes, used in leitmotif variations to represent the state of each character. And yet, I strove to modernize the sound and technique so the score would not sound like a dated throwback to a bygone era. My scores for Human Target, Dark Void, Caprica and Battlestar Galactica laid the foundation for this work, and Da Vinci’s Demons would not sound the same if I had been hired on it at any other point in my career. 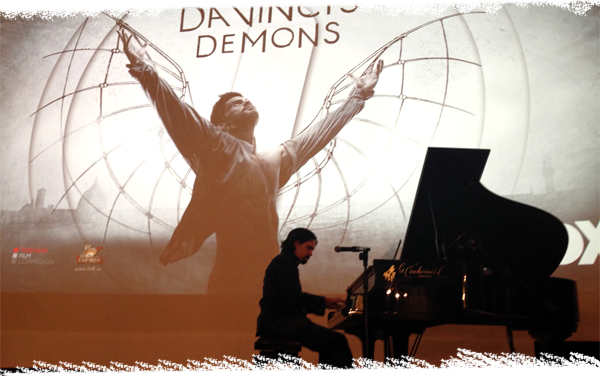 Da Vinci’s Demons actually allowed me to reconnect to a long-lost part of my youth. When I was 9 years old, I lived with my family in Italy for half a school year, where I was tossed into public school in Siena and quickly picked up the language and customs. Returning to Italy for the first time in 25 years, for the world premiere in Florence, was an incredible experience. Memories of my childhood flooded back into my mind. At the premiere, I performed my score live at a grand piano on stage, as a featured artist before the main event. The relationships I formed with the cast and crew at that trip will last far into the future, and informed my future collaborations with them all in the subsequent seasons.

One night, as we shared a car ride out to a restaurant in Vinci with members of the cast, I asked David what was in store for Season Two. He looked at me and smiled. “We’re going to Peru,” he said with that distinct Goyer smile that tells you he’s serious. 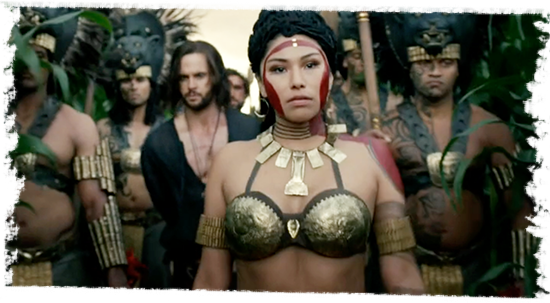 To Peru, the story went! For the middle arc of the season, I worked with Peruvian musicians to bring indigenous singers down from the mountains above Lima, to a recording studio, to record pre-Colombian folk songs. This collection of recordings would form the foundation of my score for these daring episodes.  I also introduced new themes, such as for the mysterious Labyrinth, and our characters from Peru and the Middle East.

By the end of the Season Two finale, my score had evolved into a layered tapestry of musical material. I began to find it was so complex that even I couldn’t keep it all straight. I had dozens of themes, each of which had specific rules about how and when it could be used. Fortunately for me, I had been blogging about each episode, detailing every scene, and explaining my process. Throughout the second and third season, I began to rely on these blog entries as a trail of musical breadcrumbs, to help ensure that I kept all the themes perfectly consistent.

Though I don’t have the personal bandwidth this year to blog about every single episode of Season Three in detail, like I have in the past, I can give you the loyal Da Vinci fans, some musical breadcrumbs to hang on to, clues to follow as you listen. The various stories of the first two seasons culminate their arcs in Season Three as character allegiances align in unexpected ways. At the start of the third, and ultimately final, season of Da Vinci’s Demons, I realized I had accumulated nearly all the thematic material I would need. As such, my score for the third season takes all of these essential thematic ideas developed over the past two years and weaves them together into what I hope is an immensely satisfying musical finale. That is not to say that the score for the third season contains nothing new. I introduced a handful of important new themes, the most important of which represents the mysterious leader of the Labyrinth, and develops that idea into a huge chorale by the end of the season.

The vast majority of the thematic material in Season Three comes from the first two seasons, however. Saying goodbye to each of these characters was a moving experience, as I got to write definitive versions of many of their themes. Sometimes, I was overwhelmed by thematic possibilities. With characters switching allegiances, I occasionally found myself needing to adapt an old theme for an entirely new emotional meaning. Uplifting themes were given disturbing menace, while dark themes were given new brightness.

Though the themes are mostly the same, the biggest musical difference between this season and those previous is in the sound of the music itself. I pushed the size of the orchestras and choirs, to help support the expansion of the story. Episodes featuring massive battles of sprawling armies meant that the scope of the score needed to broaden. Season Three strikes what I feel is my perfect balance between modern and ancient instrumentation. As a composer, I have always enjoyed the challenge of blending the Renaissance tones of the viola da gamba, lutes, and Celtic harp with contemporary orchestral writing, subtly-layered modern synth sound design, and heavy percussion. This score, in particular the third season soundtrack album, reflects my ideal equilibrium.

And what of the Main Theme? For this season, I finally returned to the first piece of music I ever composed for Da Vinci’s Demons and revisited it. My original version emerged out of a musical puzzle, a palindrome inspired by Leonardo’s backwards writing: thus, it sounds the same even when played in reverse. Near and dear to my heart, this theme set the tone for the entire score.

I felt, however, that somehow it was too uplifting in tone to represent Leonardo’s extremely difficult personal struggles in these episodes. So, I re-did the Main Title theme for Season Three. The primary chord progression of the theme initially went Eb Maj – G maj – C min – Ab min. The title sequence used to open with the first two chords, Eb and G, in an exciting ostinato. For Season Three, I simply reversed the order and started with the C min and Ab min chords instead.

This simple change resulted in a fascinating change in tone. The title starts with a sense of impending doom, implying that Da Vinci is facing his greatest challenges yet. Once his melody comes in, of course, the chords are the same as they were. By only changing those two introductory chords, it completely changes the frame of reference for the melody. And, don’t worry… its still a palindrome.

Upon revisiting this Main Theme that means so much to me, I realized it was finally time to do an extended version. So, my new Da Vinci soundtrack opens with a new, extended and enhanced theme, produced specifically for the album. In crafting it, I channeled my passion for the whole series, and brought to it everything I’ve learned over the last three years. 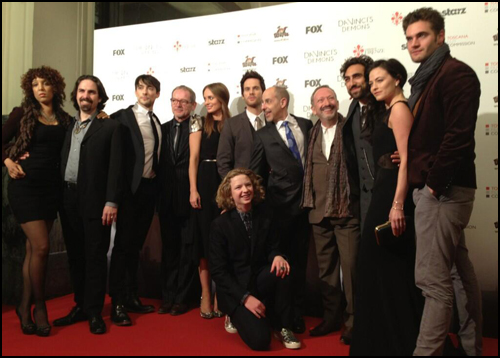 Very few projects have had so profound an impact on my life as Da Vinci’s Demons. Professionally, the series garnered tremendous recognition from my peers when I was honored with a Primetime Emmy Award for Main Title Theme Music. Personally, it expanded my horizons, bringing me on a journey to Florence, where I performed the score live, in the oldest cinema in Italy, before the world-premiere screening. I have formed truly wonderful friendships, with producers, actors, writers, crew, and executives alike, relationships I trust will last into the future. Musically, the show pushed my creative limits, allowing me to dive into the kind of layered thematic scoring I grew up adoring, fostering my growth as an artist.

I am eternally grateful for the opportunity to be a part of this extraordinary series, and thrilled that all three Da Vinci’s Demons soundtrack albums are now available for fans. On November 3rd, the last remaining Da Vinci soundtracks become available. You can get the long-delayed physical CD of Season Two (thanks for your patience, you guys!) as well as both physical and digital versions of Season Three. With that, my scores for all three seasons are finally available in physical and digital album formats.

I hope this music will provide fans their own journeys to the Renaissance, to sweeping romance and daring adventure.