In “The Voyage of the Damned,” all our characters embark on the journeys that will define their arcs this season.

Da Vinci’s epic journey begins in a bustling fish market in Pisa. To help establish this world, I added the sounds of street musicians playing a traditional song on lutes, “Propignan de Melyor.” Later in the episode, you will hear a small band playing “Schiarazula Marazula.” Please note the very carefully-worded description of desired performance technique that I gave to guitarist Ed Trybek…

Music historian Adam Knight Gilbert tracked down these pieces because they are wilder dances, more likely to be played in the streets than the more formal source pieces I had used for the Medici court scenes in the first season. 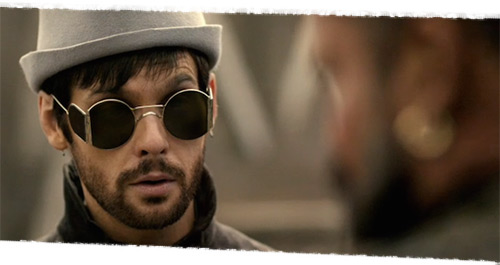 The episode opens with a funny scene on board the Sentinel, where “Riario” (Da Vinci in disguise) attempts to commandeer the vessel.  To maintain the illusion, the score quotes an ominous version of the Riario Theme under his dialog:

I am very curious if fan watching the show for the first time fell for it. I have heard from friends that the illusion worked marvelously. Tom Riley’s impersonation is spot on, and the spooky Riario Theme seals the deal.

Before the plan can work, Duke Alfonso of Naples arrives and calls Da Vinci’s bluff. Alfonso’s arrival and the ensuing sword fight are underscored with variations of the Naples Theme that I introduced in depth in my last blog entry:

The Naples Theme is woven throughout this episode. An ambidextrous swordsman, Alfonso is the first fighter in the series who can best Da Vinci, forcing him to rethink his approach to combat. (The combat is especially convincing because actor Kieran Bew, who plays Alfonso, was a British sword fighting champion before becoming an actor!)

For the sword fights, I relied heavily on the chugging ostinatos in the Calder Quartet to provide the forward momentum.  The small ensemble chugs away with aggressive sixteenth notes throughout these scenes, adding urgency. While the strings are relatively punchy, they are still not as aggressive as percussion. Their sound is soft enough that it doesn’t interfere with clashing sword sound effects, allowing the score to pop through the final mix better than if it were based in percussion and drums. The dynamic range of the string quartet is limited, which actually worked to my advantage because the dynamic range of the sound effects was so wide. 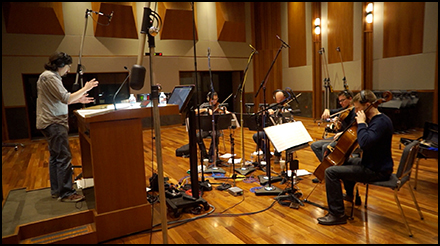 I knew I couldn’t use dynamics or instrumentation to play the shifts in the combat, because the score would be struggling to be heard.  Instead, I used harmonic modulations amp up the tension. If you watch the final sword fight with an ear to the score, you’ll notice that every major shift in power between the two men corresponds with a modulation in the score. As Da Vinci knocks a sword out of Alfonso’s hands, the score modulates up. As Alfonso regains his sword and forces Da Vinci back into a corner, the score modulates back down. The string quartet provides a constant urgent backbone for the score and allows the sound effects to function almost like musical instruments themselves, providing shape and contour to the sequences.

Despite the furious sword fights, the most memorable set pieces in “The Voyage of the Damned” are the construction and voyage of the Mechanical Fish. In real life, Da Vinci speculated about such vessels, so it was a thrill to see this appear in the show.

As they make final preparations and cast off, the score builds an energetic ostinato. I would call this the Submarine Ostinato, but it is not actually unique to this scene. I wound up using it again in a future episode, for a different vehicle, because it worked so well in this sequence.  So, let’s call this the Vehicle Ostinato:

I wanted the sequence to feel like a NASA rocket lifting off. Everyone gathers around, speeches are made and then brave heroes climb into a cramped space and risk their lives. I wanted to score this familiar kind of scene in a way unique to Da Vinci’s Demons.

In place of pounding percussion, I wrote for a small hide drum to establish the energetic rhythm, along with the quartet. In place of low brass and concert basses, I wrote two passes of violine, a cousin to the viola da gamba that has a lower timbre and more closely resembles a bass. I intentionally wrote phrases that don’t quite fit the ensemble. The result is music that feels as if it wants to be bigger, but is still a little awkward and goofy. This approach was perfect to build excitement and simultaneously acknowledge the comedic adventure beats throughout the scenes. 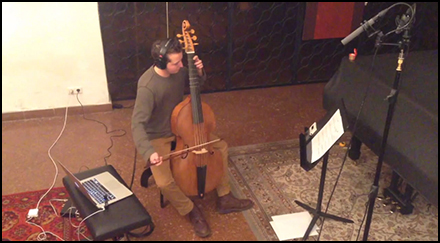 The most hilarious moment comes after the submarine dives into the water. The suspense builds as Da Vinci waits for them to find their buoyancy. For this moment, I wrote a triumphant fanfare for three crumhorns. The crumhorn technically hails from a bit later than the Renaissance, but nevertheless has a primitive, buzzing sound. No offense to crumhorn players around the world, but the instruments sound a bit like kazoos. I had previously used crumhorns to great comedic effect in the LARPer comedy film Knights of Badassdom, and realized how funny it sounds when played in a triumphant style.

As Da Vinci waits for his brilliant device to work, he is accompanied by what sounds like a triumphant three-part harmony kazoo fanfare. These are crumhorns, of course, doing what they do best. As the cue climaxes, the submarine hits the seabed with a thud and the score comes to a sudden, screeching halt.

My favorite submarine moment comes later, when Da Vinci and Zo approach a sunken wreck and work furiously to avoid it. Having grown up on The Abyss and The Hunt for Red October, I’ve always loved the emotional impact of a suspenseful sonar ping in underwater scenes. (I actually sampled a sonar ping sound effect and used it in the score for Episode 105, “The Tower,” to help underline Da Vinci’s epiphany of how bats make sense of their world.) 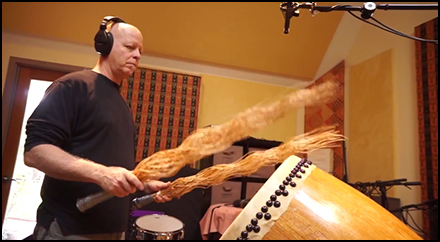 Obviously, there would be no sonar device in Da Vinci’s creaky wooden vessel. Nevertheless, I wanted to create that same sense of dread from my favorite submarine genre films. So, I used Japanese percussion instruments in the score and simulated the feeling of sonar. (Traditional Japanese percussion music often employs gradual increases and decreases in tempo, an effect I’ve borrowed in the past, most notably in the opening minutes of the track “Storming New Caprica” from Battlestar Galactica, Season 3.)

When we first see submarine closing in on the sunken shipwreck, a single clack of a clave pierces the murky atonal score and ambient underwater sound effects. I asked my mixer Steve Kaplan to soak the percussion in a long, cathedral reverb. Before long, a second hit cuts through. Then another, then another, with increasing urgency.

A dissonant cluster in the string quartet glisses upwards as the submarine ascends, climaxing as the vessel narrowly escapes, while the percussion creates the feeling of an alarming sonar ping. My hope is that the audience is so conditioned to hearing this kind of sound during submarine movies that they don’t even notice it – they only feel escalating tension as the gap between the “pings” closes. 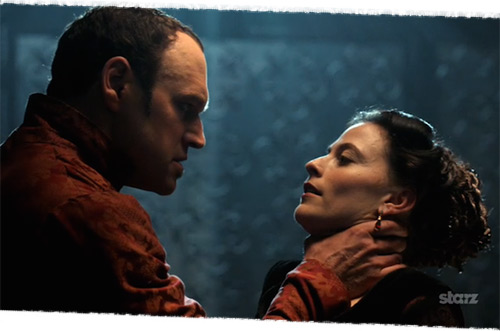 “The Voyage of the Damned” also features prominent variations of the Lucrezia Theme, and the distinct Lorenzo and Clarice variations of the Medici Theme. All three themes are jammed together into the foreboding scene when Clarice confronts Lorenzo and tells him that Lucrezia was the Roman spy.  This scene was tricky, because Elliot Cowan and Lara Pulver are two of the most subtle and restrained actors on the show, and my instinct is always to tread lightly with their themes. Furthermore, Clarice is saying what we’ve known since the first episode. From the audience’s perspective, this is hardly a revelation. For Lorenzo, however, this news crushes his world. The score had to aggressively underline his rage, and play the emotions in a big way.

One of my favorite variations of the Lorenzo theme occurs during the shot following this scene, where Clarice watches her husband sneak out of Florence, disguised as a merchant. She looks down on him from their palazzo, her elegant dress in stark contrast to his dirty robes. Just one episode ago, I wrote the most epic variation of the Medici Theme I possibly could. Now, that melody is reduced to a duet of slithery recorders in parallel fifths that capture Clarice’s despair. 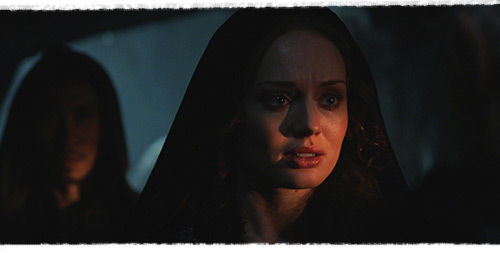 Lucrezia’s Theme also comes in to play during the subplot in Rome, where she guides Lupo Mercuri to discover the identity of the mysterious prisoner in the Castel Sant’Angelo. Later, when Mercuri finally finds his former friend and college, now a barely recognizable shriveled old man, the score underlines his shock with a lonely statement of The Prisoner Theme, first introduced in Episode 103, “The Prisoner.”

Speaking of triumphant thematic fanfares, I wrote a big one for Da Vinci at the end of this episode. After he successfully convinces the former slaves of the Sentinel to join him on his journey, a rousing ostinato in the quartet prelaps the cut to the ship sailing off into the unknown. The journey of the second season is now underway.

At the end of the episode, Da Vinci shares ominous words with The Turk. After many sequences throughout this series teasing that the Turk is likely not real (or not always real), this scene confirms without a doubt that Al-Rahim exists in Da Vinci’s head. The Turk’s arrival is scored with an ominous statement of The Turk Theme:

The Turk Theme was introduced in the first episode, and its exotic Middle Eastern melody frequently announces his arrival. The theme represents Al-Rahim as a character, but throughout the series it has taken a backseat to the more narratively important Sons of Mithras / Book of Leaves Theme:

After an initial statement of the Turk Theme, this theme underscores most of their conversation, wailing on a fragile Yialli Tanbur doubled by an expressive duduk. The theme works on two levels. Da Vinci pursues the Book of Leaves and his actions bring him closer to his goal. For Da Vinci, the theme functions as the Book of Leaves Theme. 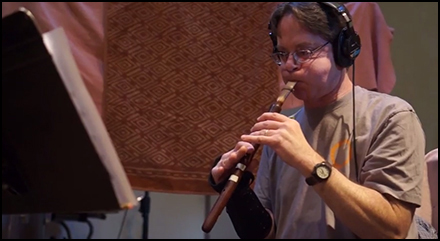 For the audience, the theme functions in either capacity, depending on how they view the scene.

Each episode this season has a unique End Credits piece. This week’s continues the mood with an ethereal ethnic variation of the Sons of Mithras / Book of Leaves Theme, played on a solo viola da gamba, above gently strumming lutes and a hypnotic hide drum. Between each melodic phrase, the ambient bells and bowls that have always represented The Turk offer ghostly tones, echoing into the darkness. 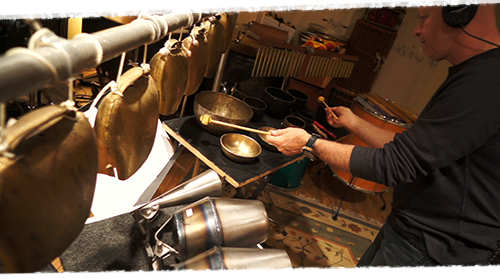 The next episode introduces new challenges on our various characters’ journeys, and reveals essential backstory for one of the show’s most conflicted characters. I know I’m still pretty far behind with the blog entries here, but I’ll catch up soon, I promise! 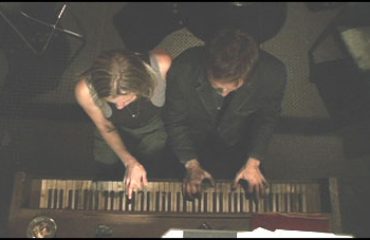 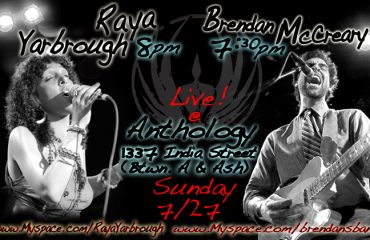