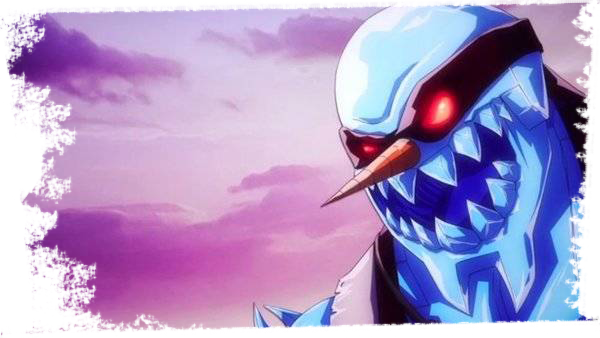 It’s time once again to get in the holiday spirit with a new “Eureka” holiday special! Everyone involved with this episode knew it would be difficult to top last year’s O Little Town (a processs I chronicled in a previous entry), but I believe we managed to take this series, and perhaps holiday specials in general, to a whole new level of ass-kickery with Do You See What I See?  Check out some exclusive behind-the-scenes footage of our insanely fun recording sessions:

Do You See What I See? certainly raised the stakes visually compared to last year’s special. The episode features four distinct styles of contemporary and classic animation. When writing the music, I had to measure up to the exciting imagery, match each style with a distinct musical style, infuse every cue with holiday instrumentation and various Christmas carols and do it all while still preserving my quirky, signature “Eureka” sound.  I had my work cut out for me, and knew from day one this episode would be one of the greatest challenges of my career thus far. 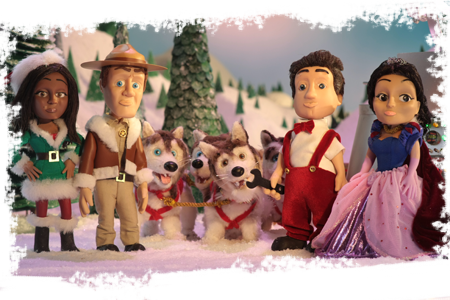 ANIMATED SPOILERS AHEAD: In the episode, our heroes are whisked through various animated realities, beginning with a contemporary CGI look.  They are then taken to a Looney-Toons style world, stop motion and eventually to anime, with a few brief yet amusing pit stops in other genres along the way. Each of these styles required a slightly different shading, but I was careful not to let the style dictate the emotion. I generally strove to infuse the score with genuine emotion, excitement and a sense of thrilling adventure, all sprinkled with a sheen of Christmas spirit. 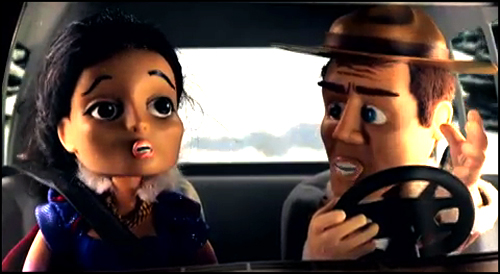 A great example of what I’m talking about can be heard shortly before the episode’s climactic battle.  Carter and Jo are speeding towards the giant snowman ninja (the plot details are a little complicated, just trust me on this!) before it wreaks havoc on Eureka.

The symphony orchestra is blasting a rousing fanfare that would be at home in a Spielberg-ian adventure film.  Yet, underneath the orchestra, there are playful synthesizers and bluegrass instruments that keep the score firmly rooted in my “Eureka” soundtrack. Energetic string ostinatos, church chimes and, of course, sleigh bells give the entire sequence a delightful holiday sprinkle:

Another favorite moment in this style is when Carter’s jeep sprouts skis and blasts across the snowy stop-motion landscape.  That Christmasy sleighbell and string groove pops back in, followed by the first violins quoting a bouncy version of Carter’s Theme:

There are also several places in this episode when I ignored the animation style and just went for broke, scoring the emotion. 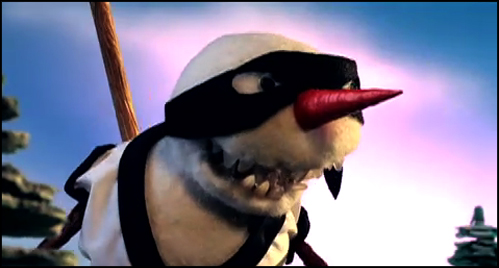 When the giant snow ninja appears, it looms through the forest like Godzilla, tearing through anything in its path.  The score in the claymation sequence up until this point had been referencing the 1960’s sound of the original Rankin/Bass animated stop-motion specials. But, here our characters are in real peril and the score needed to comment on that. So, the timpani, bass drums and strings stomp out a pounding ostinato representing the huge feet pummeling the earth while the snowman’s screams are amplified by dissonant parallel minor chords in the french horns and trumpets:

It’s a massive sound, one completely at odds with the adorable stop motion animation on screen.  But, these conflicting ideas were necessary to keep the tension alive.  In fact, one of my biggest challenges on Do You See What I See? was to figure out which sequences to score as comedy and which to score with tension.  Some of the scenes could work with either approach, so my decision wasn’t always clear. 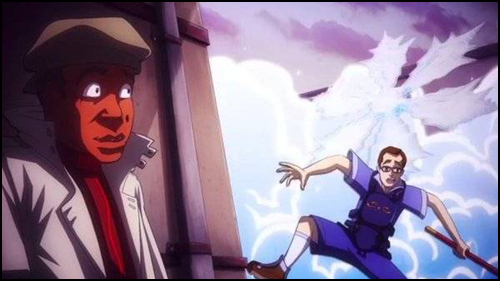 However, there were a handful of sequences that were incredibly easy to decide my approach.  The most exciting for me, personally, was the big finale animated in the style of anime.  I have always loved anime films, series, games, comics and music and have rarely found opportunities to explore the genre musically.  Suddenly, I was handed a masterfully animated, hilarious yet exciting climactic battle between my favorite characters on “Eureka” and a giant ninja snowman.  I was a kid in a candy store. 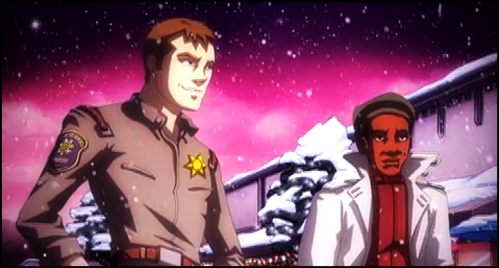 I had so many ideas, built up from decades of consuming anime, that I wasn’t even quite sure where to start.  Honestly, if this scene had been a half hour long I probably still wouldn’t have been able to do everything I wanted to.  But, I definitely made the most of the screen time.  This massive battle is jam-packed with references to my favorite anime scores. 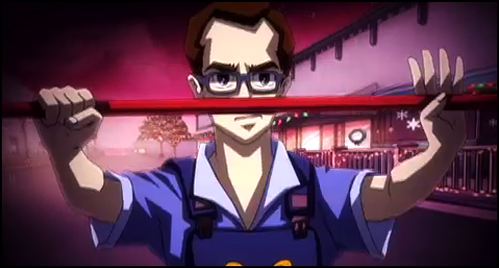 The sequence begins as Fargo transforms from a helpless springy-necked little toy creature to a badass ninja warrior.  All the Christmas instrumentation and cutesy animation stylings are put away for a moment.  Even my full orchestra takes a back seat to what I bring in next: a seething barrage of techno synthesizers announcing the introduction of anime better than anything else possibly could:

Eventually, after I’ve had some fun with this aggressive techno texture, Carter shows up and faces off with the ninja.  This is where the homages become less subtle. 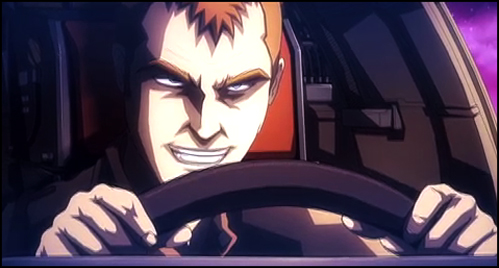 On every single smash cut between the ninja and Carter, I put pounding taiko drums, reminiscent of the score to Akira.  And above it all, ethereal ethnic female voices bellow out a blatantly obvious reference to the score of Ghost in the Shell:

Ghost in the Shell and Akira are two of my favorite anime films, ones with truly groundbreaking scores. Having the opportunity to acknowledge their influence on me in such a hilarious and yet slightly badass sequence was more than I could have ever dreamed.  But, just in case the homage slipped past a few people, I decided to make it really obvious!  The vocals in this sequence are naming my favorite anime composers of all time!

… the vocals name the composer of Akira. 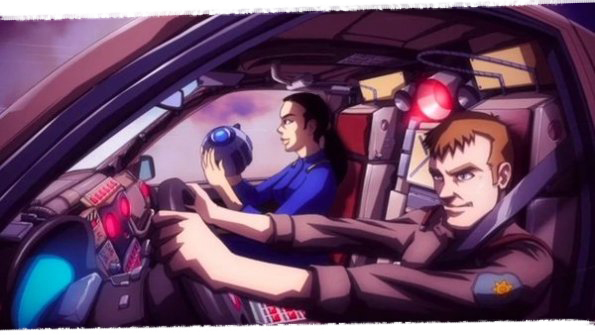 Believe it or not, the vocal performance for this sequence was performed entirely by Raya Yarbrough, who not only sang all the gorgeous Christmas carols in last year’s episode but also provided haunting vocals for Battlestar Galactica on many occasions.  She and I had so much fun laying these tracks down that we almost couldn’t finish because we kept cracking up at how funny the scene was.

While the anime sequence was the most fun for me to compose for, it certainly wasn’t the only scene that needed a very unique approach.  When our characters are whisked away into a Looney Toons style world, the score needed to take a massive turn into that particular school of animation. 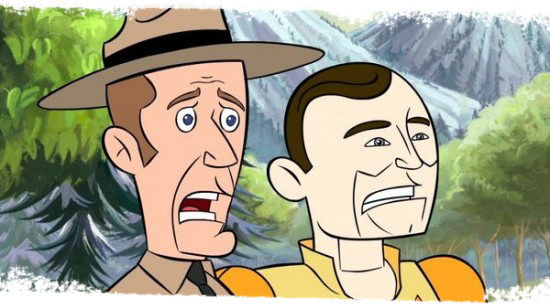 When I think of classic era animation music there are only two names that come to mind: Carl Stalling (Looney Toons) and Scott Bradley (Tom & Jerry).  Their music had a tremendous impact on the stories they were telling.  And, in fact, their approaches were fascinatingly different.  I could write a whole blog entry on this topic… wait a minute… I did write a whole blog entry on this topic!  (Also includes an exclusive interview with composer Bruce Broughton, I definitely recommend checking it out) 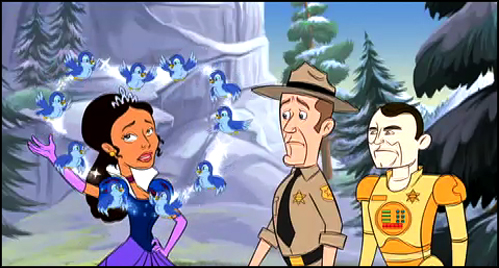 Do You See What I See? spent significant screen time in this Looney Tunes style, and so it required an incredibly painstaking approach to music.  Every single physical action and gesture had to be accompanied with a complimentary musical phrase, resulting in the instantly-recognizable and distinctly chaotic cartoon scoring we all know and love. 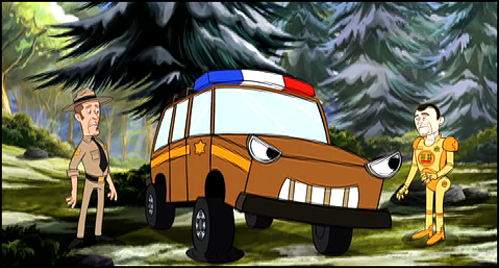 In this clip, when Carter and Andy are first taken into the Looney Toons world, you can hear all the signature elements that make up the Stalling / Bradley approach.  However, sleigh bells and celeste are tucked away in the ensemble, grounding the zany cartoon score in the “Eureka” holiday special sound:

Writing in this style is like taking a master class in orchestration.  Every second requires new colors, so you have to get very good at using your ensemble to generate new sounds.  One classic example is by putting mutes on the brass, or by having a single violin solo play a line instead of the full section.  Both of these can be heard in this next clip: 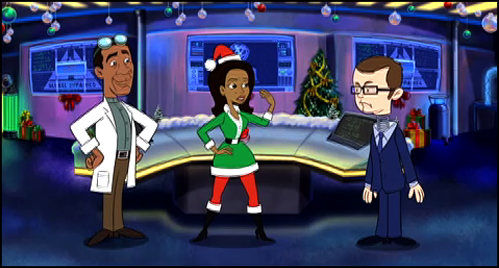 In addition to writing in various styles, I was also given the freedom to fully quote various Christmas carol melodies throughout the score.  For example, here’s a quick snippet of “Angels We Have Heard on High” that pops up in the middle of a Looney Toons inspired cue:

Given the namesake of the episode, however, I was most excited to find clever places to put “Do You Hear What I Hear?”  The first place I quoted the song was with Raya singing it in the moments right before the Main Title sequence.  I asked her to sing the melody in a few other spots as well.  But, the most fun I had was in distorting the melody and using it in places where you wouldn’t expect it. 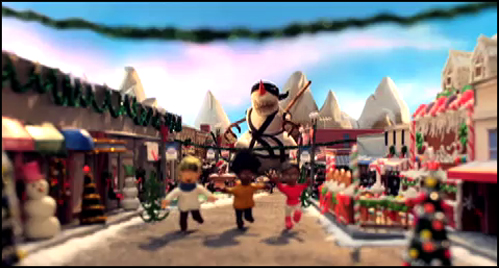 For example, I doubt any of you ever thought you’d hear “Do You Hear What I Hear?” converted to a diminished chord and shouted at you by a choir while a 70 feet ninja snowman charged toward you.  Am I right?

There were other occasions where I wove multiple holiday songs together with my own thematic material.  Toward the end of the episode, the orchestra quotes a beautiful, lush arrangement of Allison’s Theme, which is followed by “Jingle Bells” in the muted trumpets and celeste, then sung again by Raya.  After that, the chimes and woodwinds quote “Carol of the Bells,” and Raya returns to offer a final solo statement of “Do You See What I See?”

There were at least another half dozen specific musical references hidden in my score, but I don’t want to give away all the surprises of Do You See What I See?  And besides, I’m curious to see if you guys catch them all.  🙂  Hiding these little musical easter eggs was just one more aspect of this project that made it so delightful. 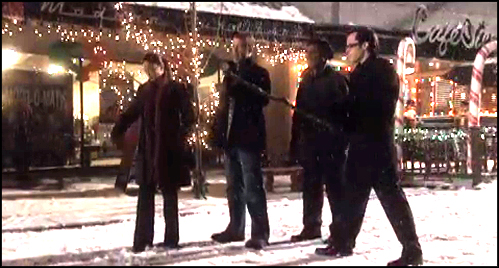 At the end of this crazy adventure, our heroes are finally restored to live action.  Here, the music needed to be celebratory, epic, adventurous and moving.  I culled together influences from all the animation styles and slammed them together into a single, bouncy yet beautiful piece for orchestra:

A score this massive would not be possible without the help of my ridiculously awesome music team.  I owe a big thanks to Steve Kaplan for mixing and recording, Jonathan Ortega and Michael Beach for contributing additional composition, Ed Trybek and Henri Wilkinson for amazing orchestrations, Tom Brissette and Laurence Schwarz for additional engineering, Neal Desby for additional conducting, Peter Rotter for contracting the orchestra, Jonathan Beard for copying, Kevin Porter for directing a damn fine video blog, Andrew Craig for the session photos and David Matics, Chris Moscatiello and Andy Harris for their invaluable assistance.  I’d also like thank all the incredible musicians who played on the score.  This would not be possible without all of you. 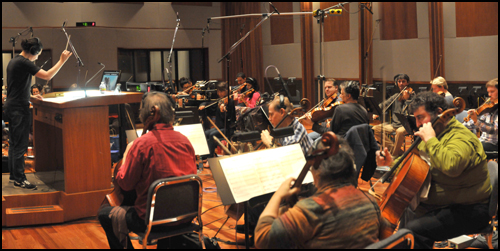 An extra loud round of applause goes to the producers, writers and directors of “Eureka.”  The full orchestra would not have been possible on this one without the support of Jaime Paglia, Todd Sharp, Bruce Miller, Steve Welke, Amy Berg and Matt Hastings.  And, of course, to everyone at SyFy for knowing what a difference music makes. You guys, rock! 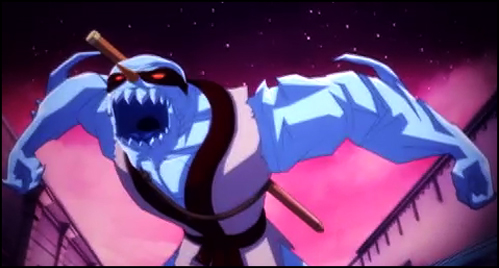 This is my final blog entry before 2012.  I hope all you loyal blog readers spend your holiday with good friends and family, while listening to good music.

PS: There was a surprise Battlestar Galactica connection with this episode.  Anyone catch what… or who… it was?  🙂