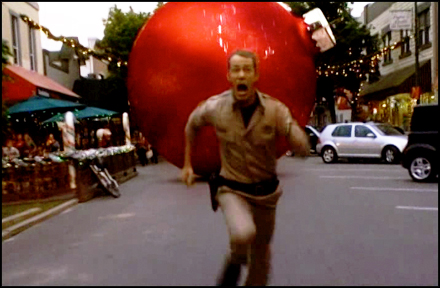 Just in time to get us in the holiday spirit, a very special episode of “EUReKA” premieres tonight. O Little Town… is a holiday special in the grand tradition of television Christmas specials (ok, not the STAR WARS one!) and provided many incredible musical opportunities for both songs and score, original music and adaptations of seasonal classics.  However, the biggest milestone in this episode was the use of a full orchestra for the first time ever on this series.  Watch the video blog to see us in action:

I’ve been working on (and in a way, living in) “EUReKA” for several years.  However, the series went through a seismic shift in Season 4 and has grown to become one of the most dynamic, creatively challenging and evolving series I’ve scored since “Battlestar Galactica.”  And, with O Little Town…, the series joins BSG, Caprica, Human Target, The Cape and The Walking Dead in the ranks of the very few contemporary series to use live orchestra. 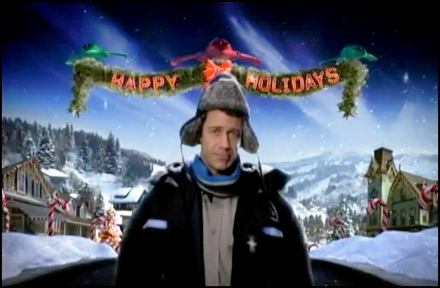 A few months ago, I was surprised to learn we would be working on a holiday episode of “EUReKA.” “It’s an idea we’ve kicked around for a few seasons now,” explained series creator and executive producer Jaime Paglia. “I love the holidays, and our show is particularly well-suited to doing something really creative.  My co-showrunner, Bruce Miller, came up with a terrific concept for the episode that could be told if it was framed as kind of a fable for our town.  And I think we all relished the opportunity to create a perennial episode that our kids could grow up watching every year.”

(All session photos by Andrew Craig)

The concept, from the beginning, was to incorporate holiday classics into the musical score. “Obviously, we wanted as many classic holiday standards as possible,” Jaime said.  “But they’re also extremely expensive to license.  So we found creative ways to record our own versions.  Even our co-executive producer, Matt Hastings, who directed the episode, got a chance to show off his pipes by singing one of the songs.” 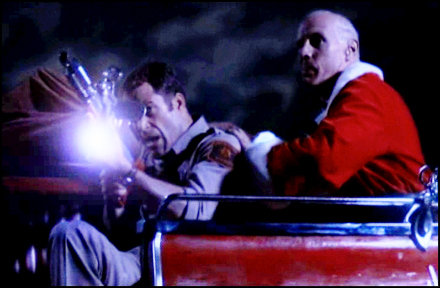 When I first watched the episode with producers Jaime Paglia, Bruce Miller and Todd Sharp, we knew right away this one was special and would require a unique approach.  I was hesitant at first to even bring up the idea of using an orchestra.  I didn’t want it to be a gimmick.  The emotional connections between characters and epic visuals needed to be firing on all cylinders to justify the kind of score an orchestra would enable me to write.  Watching the episode, I quickly realized that it was not only worthy of a big orchestral score, it demanded one.

The producers were very excited and got on board with the concept immediately.  “The range of instrumentation and sound quality of a live orchestra just can’t be replicated by synthesizers,” Jaime told me.  “We wanted to do this episode right, and pushed to have the score and songs be given extra support to deliver a memorable musical experience.”

And if you think this is the last time you’ll hear a big orchestra on “EUReKA,” don’t worry.  You’ll hear it again next season. 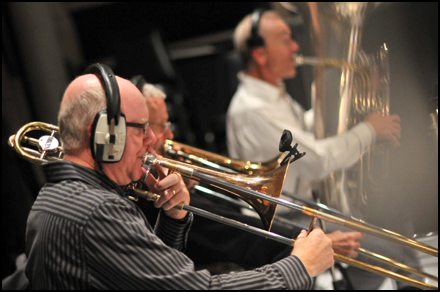 I knew my instrumentation would be a hybrid of orchestral instruments, my “EUReKA” ensemble of speciality musicians and the obligatory celeste and sleigh bells that conjure up images of snow flakes and hot cocoa.  Similarly, the melodic and thematic material forming the basis of the score would also be a hybrid of my original character themes and traditional holiday classics.

In many cases, the carols were featured prominently, functioning essentially as songs.  Executive producer Todd Sharp and I knew right away that the vocalist we wanted to feature was Raya Yarbrough. 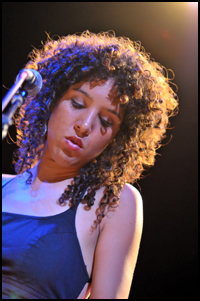 Todd’s been a fan of hers since he heard her first album, in particular her cover of Queen’s Dreamer’s Ball.  As we sat in the room with the other producers, he actually got on his computer and played that track for the whole room, just so people could hear what her voice would sound like singing on “EUReKA.”  “Raya just has a fantastic, distinctive voice,” Jaime said.  “When Bear said she was interested in recording a song for our Christmas episode, it didn’t take much convincing.”

I’ve worked with Raya a millions billions times, but I was still unprepared for how gorgeous her voice would be on these pieces.  The first carol she sang was “Lo,  How a Rose e’er Blooming:”

[audio:https://www.bearmccreary.com/wp-content/uploads/2010/12/erk410a.mp3|titles=Lo How a Rose e’er Blooming]

She was also featured in the closing montage, performing a gorgeous rendition of “Have Yourself a Merry Little Christmas,” which you can hear in the video blog.  Her performance is absolutely stunning.  She was incredible on BSG, singing in Sanskrit, Gaelic, Armenian, Anglo Saxon and many other languages.  But, yeah… I should have her sing in English more often. 🙂

In fact, her singing on O Little Town… inspired us to produce a soon-to-debut holiday album, December Songs.  It features her moving performance of “Have Yourself a Merry Little Christmas,” an original song and several other great pieces.  Check out her blog for more details.  A release date will be announced in the next ten days, and I’ll blog more about it in detail later this month. 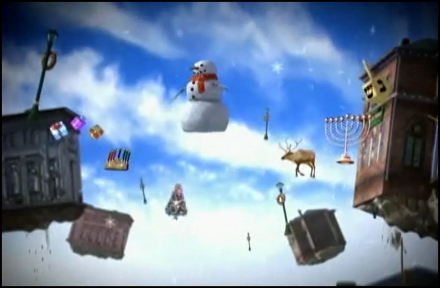 In addition to performing the songs and in the score cues, Raya joined me in singing my “Christmas Caroler” arrangement of Mark Mothersbaugh’s theme song.  Melded with the hilarious holiday imagery, this main title absolutely cracks me up.  I wish they’d use it for every episode: 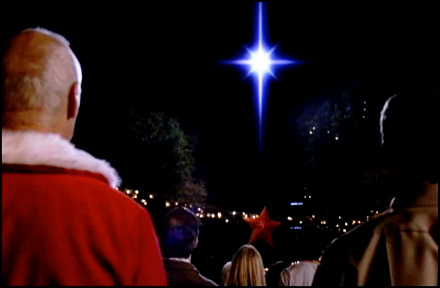 Producing songs is always fun, but O Little Town… was a challenging score as well.  The most fun was incorporating well known Christmas carols into the score in some very clever ways.  For example, in the opening act, Santa’s sleigh rockets out of control through the street of the town.  “Carol of the Bells” plays a not-so-subtle part in the action cue: 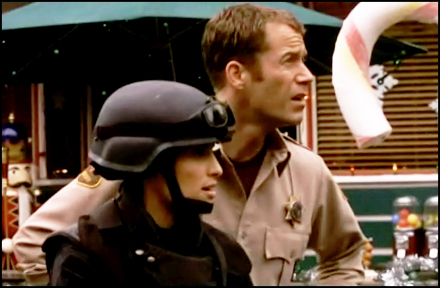 My personal favorite score quotation, however, was a bit more subtle than this one.  Halfway through the show (SPOILER ALERT) it is revealed that the entire town is shrinking.  On this revelation, the brass quote a bombastic, horror-movie-inspired quotation of the episode’s namesake, “O Little Town of Bethlehem:”

Get it? LITTLE TOWN? Ha ha!  Personally, I think this is frakkin’ hilarious.  But, I’m a soundtrack nerd.  Did any of you guys catch this? 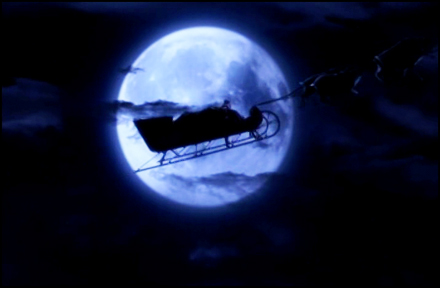 That same idea returns with a vengeance at the end of the episode.  When Carter and Taggart save the day, the orchestra quotes the song again, in a triumphant setting.  However, I had Raya overdub her voice about a dozen times to create a “Raya Choir.”  Using singers allowed us to quote the lyrics… sort of.  We changed just one word.  Instead of “O Little Town of Bethlehem” she says…

“I think Bear did some of his best work on this episode,” Paglia said, after hearing the final mixes.  “I can hardly wait to do the Halloween episode (yes, I’m already planning ahead for next year).”

Producing a score like this is already more than enough work for a professional music team.  Adding the additional responsibility of crafting nearly a dozen Christmas carol arrangements, quotations and fully-realized songs made this the most challenging episode of “EUReKA” yet.  I could never have done it without my amazing crew.  Everyone pulled all-nighters to make this episode come together beautifully, but a special shout-out is in order to my co-producers and additional composers Jonathan Ortega and Michael Beach.  These guys were invaluable to helping me finish these cues and arrangements.  Their holiday present will be a few days off to catch up on much needed ZZZs.  🙂 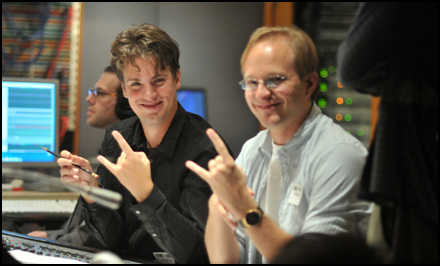 So, that’s the first Bear’s Blog holiday gift for you all.  Two other blog posts will go up this month to get us in the spirit.  One will be about Raya’s album, December Songs, which will be available on iTunes very soon.  The other will be about a special treat appearing online in the near future.  I’ll reveal more about that later. 🙂