This week’s episode, “Collaborators,” is one of the best of the entire series. However, I don’t really have much insight to offer, since it uses a relatively minimal amount of score — a welcome change of pace after the epic grandeur of the first four shows. This decision was made because the drama functioned so well without music, there was no reason to over-saturate it with unnecessary emotion.

So instead, let me introduce a performer whom you’ve heard on virtually every episode of Battlestar Galactica, since the very first episode. 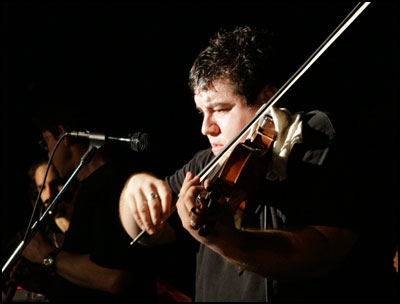 Paul Cartwright is an accomplished musician, but on this gig he rarely gets to sound like a traditional violinist. Instead, he uses his electric violin rig to create other-wordly textures, ranging from the haunting and mysterious to the screeching and terrifying. He often develops sweet chorale passages by layering multiple tracks on top of one another, or has been known to scream at the top of his lungs into his violin pick up, with every effect turned on while riding the wah pedal. 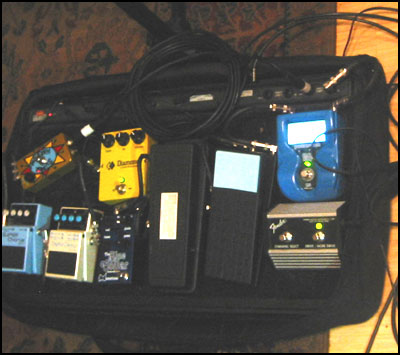 Some of Cartwright’s effects, including distortion, delay, wah and volume pedals.

Initially, my co-producer and engineer Steve Kaplan recorded two tracks at a time: a direct signal from the effects system and a signal recorded through a microphone at Paul’s amp. Ultimately, we stopped bothering to record the direct signal at all, since the mic on the amp produced a tone we unanimously agreed was the best. Paul brought several amps as our sessions went on, but we found that his tiny, 50-year old Fender Tweed Champ produced the best results. 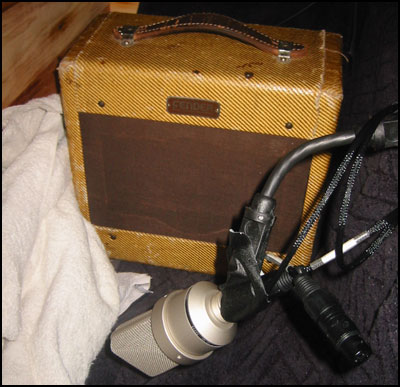 Through this amp, the tone was naturally distorted enough to mask the acoustic violin timbre, and also small enough that it prevented the violin from sounding too much like an electric guitar and pushing us unfavorably into blues-rock territory.

For the majority of the first season, the electric violin served only as a texture. It was an excellent way to take simple synthesizer textures and add subtle layers of complexity. Even now, a synthesizer tone is never left alone without some sort of electric violin texture on top of it. 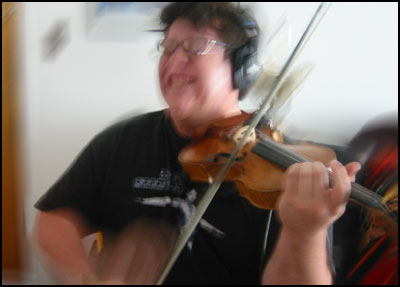 Paul blurs the lines between classical and rock technique.

However, toward the end of season one there came an opportunity to feature the electric violin as a melodic soloist and the results were surprisingly appropriate to Galactica’s alien and ancient-wordly soundscape. This cue was “Destiny” from “Kobol’s Last Gleaming, Part II.” Ironically, I was asked frequently where I found the violin soloist for that episode, when in fact he had played on every show up to that point.

The violin is strongly associated with classical music, a style I must be careful to use sparingly in the Battlestar Galactica score. As a result, even when featured as a melodic soloist, Paul still runs through the pick-up and applies effects. This can be heard in many cues, but none so prominently as Season 2’s “Baltar’s Dream:”

However, on rare occasions, I decided to feature the violin as an acoustic soloist. This gives the instrument a more familiar, recognizable tone. To date, this has happened only three times, but it is featured on a theme that will most likely be a recurring one. You’ll notice immediately how much warmer and friendlier this sound is when compared with the previous example:

While the violin is certainly not an unusual instrument, Paul’s unique sensibilities make him a one-of-a-kind artist, and an integral part of the Battlestar Galactica score. 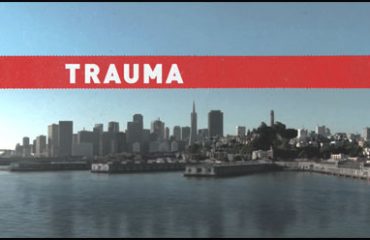 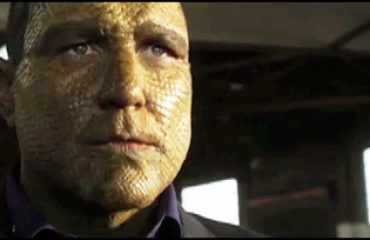