When I think about Caribbean music, my mind immediately races to the infectiously catchy polyrhythms of Afro-Cuban drumming. These grooves frequently reverberate throughout my household, as my father-in-law (Raya Yarbrough’s father) is an accomplished percussionist in this style. I was drawn to the challenge of merging the layered rhythms of congas, quintos and shakers, with one of Scotland’s most famous melodies. I was pleasantly surprised that the two distinct musical styles seemed to blend together beautifully. Once my conceptual demo of the Main Title had been approved, I knew I had a working prototype for an entirely new sonic palette for Outlander.

This Afro-Cuban-infused sound can be heard prominently throughout the second half of the season. Beyond the exciting new percussion ensemble, these episodes also brought new opportunities to introduce distinct new character themes.

SPOILERS AHEAD: Perhaps the most unique of the new character themes is one for Yi Tien Cho, also known as Mr. Willoughby.

Willoughby’s theme lives in its own musical realm, with the introduction of Chinese instrumentation, including the dizi (a flute), erhu (a stringed instrument) and a gu-zheng (a strummed instrument similar to a harp). The pentatonic mode, and unique sounds, give his theme an unmistakable character. I featured the theme most prominently in “The Doldrums,” most notably in Willoughby’s revelatory speech to the mutinous crew about his life in Imperial China. 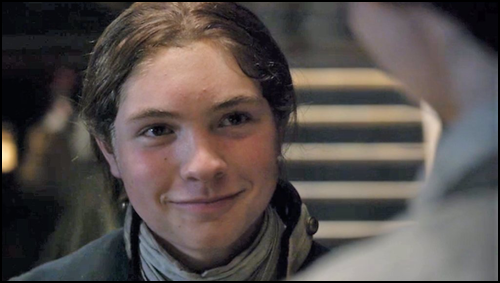 In the following episode, “Heaven and Earth,” I introduced a new (and admittedly short-lived) theme in for Elias Pound.

Elias is a young midshipman on the English vessel the Porpoise, who is stricken with typhoid fever. He forms a bond with Claire, who is ultimately unable to save him from his illness. Never before have I written a theme for a character who appears only in a single episode, but Elias’ brief story arc really struck me. I represented his child-like innocence by having his theme played on a recorder, an instrument that frequents elementary school music programs around the world. The instrument actually dates back to the Middle Ages in Europe, and was frequently used in the Renaissance and Baroque periods. I was drawn to it both for its historical accuracy, and modern day associations with childhood. 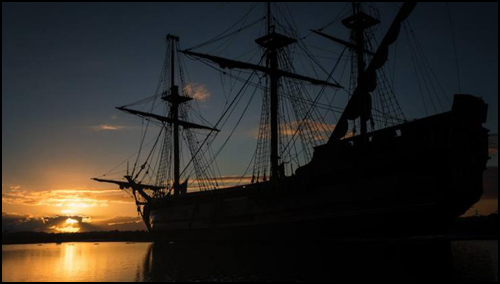 In the next episode, “Uncharted,” Claire finds herself on a strange island, and spends the first chapter of the story in complete isolation. I underscored her harrowing journey by introducing even more exotic instruments. Over the episode’s title card, a ghostly refrain of “The Skye Boat Song” is performed on a Middle Eastern flute called a Ney, while a Slovakian Fujara offers fluttering overtones in the background.  Throughout the episode, the Afro Cuban percussion ensemble is augmented with the hollow tones of rain sticks, a whale drum, and other unusual metallic percussion. My hope was that these unusual sounds would help the audience feel as if they’d suddenly been dropped into a strange, new place. 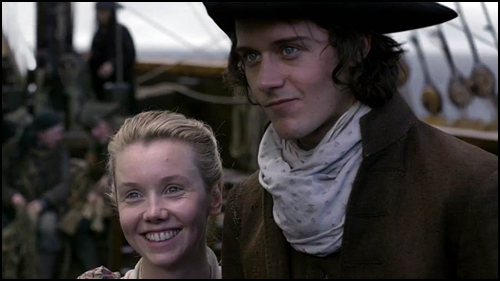 In addition to unusual instruments, “Uncharted” also introduces a new theme. As Fergus places a ring on Marsali’s finger at their wedding beneath the Caribbean night sky, a solo fiddle introduces us to the Fergus and Marsali Theme:

Though their moment is fleeting, the melody here is distinct enough that I hope a few fans picked up on it. Though I only would find one more moment this season to use this theme, I always knew I wanted to introduce it to the score before the season ends. I didn’t write a theme for these two characters because this scene required it. I did so because I feel I might need it in the future. Perhaps one day, I’ll link back to this blog entry, as I discuss how this theme blossoms into something more developed. 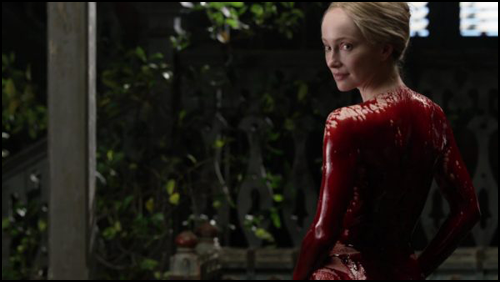 The last two episodes were a huge opportunity for new music. First and foremost, I knew I had to find a theme to represent Geillis, who returns to the story as “the Bakra,” with sinister intentions. The Bakra Theme is actually a heavily-modified version of the Stones Theme!

The Stones Theme has come to represent the magic and mysticism associated with supernatural time travel in this series. As such, it was the theme I traditionally featured during scenes with Geillis. Now, she has returned and revealed herself to be a terrifying witch intent on killing Claire’s daughter in the future. Clearly, the ethereal Stones Theme would not be appropriate for her now… or would it? Geillis’ evil machinations result from her warped interpretations of prophecy. I thought perhaps I could score her new story arc with an equally warped version of the Stones Theme that once represented her. 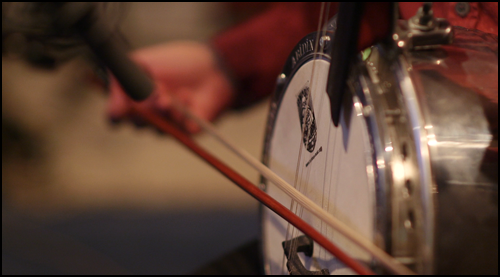 To accomplish this, I altered the Stones Theme by having it performed on a Turkish instrument called a yialli tanbur, a metallic stringed instrument with a disarmingly vocal timbre. However, I did more than have the theme played on a new instrument. I tweaked the melody by sliding certain notes a half-step sharp or flat. The familiar Dorian mode of the original theme evoked the feeling of European folk music, but now, this variation exists in a bizarre manufactured mode, not natural to any musical culture. This effectively took The Stones Theme and mangled it into the Bakra Theme. The result sounds like nothing ever heard in Outlander before – disturbingly alien, exotic and threatening.

Even the New York Times picked up on the strange new color in the score, noting in their review “Geillis’s slithery music cue, courtesy of the composer Bear McCreary, is probably my favorite of the season.”

Despite all these alterations in the Bakra Theme, I believe the DNA of the Stones Theme remains intact. I am very curious to learn if fans picked up on their musical similarity. Did you guys notice it? 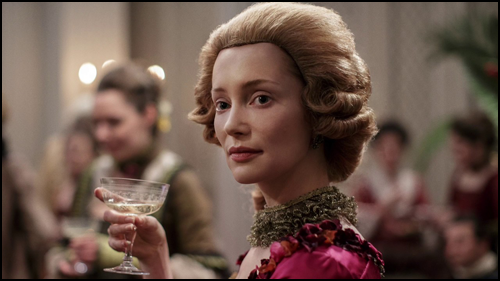 I also composed a new background motive for the Bakra Theme, which I found to be a useful motor to power through her creepy dialog. This motor was a simple chromatic figure, with an octave leap built in:

I frequently placed this figure in ambient gamelan bells and Celtic harp. For added emphasis, I occasionally added a lyrical viola da gamba solo to the figure. It was a useful tool to have at my disposal, when I wanted to reference the Bakra Theme without risking overusing the tanbur.

Perhaps the biggest challenge of the season was the Voodoo ritual in the final episode. This massive ten-minute sequence included on-camera drums, dancers, essential exposition, flashbacks, combat, revelation, and death. I had to find a way to underscore the drama while simultaneously acknowledging the ceremonial drums and vocals in the background. To accomplish this, I wrote two pieces of music on top of one another: a layer of ceremonial drums and singers, and a layer of dramatic score. Each layer could theoretically exist alone, but I conceived them to work together, each adding something vital to the other. Unlike a typical scene, which I would score when the episode is nearing completion, I worked closely with the editors, especially Michael O’Halloran, from the earliest assembly of the scene. Together, we strove to ensure that music and picture evolved together organically, a process that took over two months.

The piece begins fully with the source music layer, the drums. That ceremonial music gets an added life with the entrance of Joel Virgel’s vibrant vocal performance. After a minute and a half, the score layer begins to sneak in, slowly growing in prominence until, at last, the orchestral strings soar with a full statement of The Stones Theme (the actual Stones theme, not the Bakra variation) as Claire recalls the Druids dancing in the first episode. For the rest of the scene, the source and score layers take turns moving to center stage, but never fully existing on their own. Towards the end, I gradually increase the tempo, subtly at first, but eventually modulating metrically into a breakneck new time signature for the furious finale. As we were recording, hearing the Afro-Cuban ensemble and the symphonic orchestra match these carefully calculated moves in tempo made me beam with appreciation for my assemblage of world-class musicians. 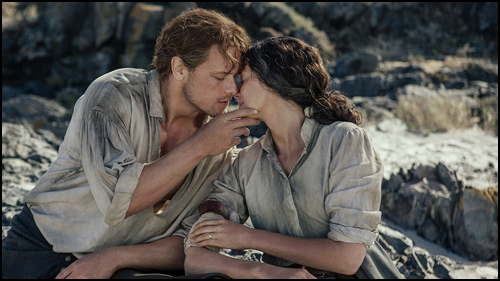 The audience’s journey across centuries and continents would only work if they felt connected to Jamie and Claire. I was mindful to always keep their themes at the forefront of the score, no matter how exotic the arrangement around them became. This philosophy is most evident in the episode’s climactic moments. The musical culmination of the season begins when Claire falls into the ocean during the hurricane, at peace with descending into the murky depths. Here, the producers and I played against the inherent suspense by allowing the score to quote the “Faith” Theme from Season Two.

Introduced by a solo piano in the episode where Claire tragically loses her first child, this memorable melody brings with it an immediate emotional impact for any fan of the show. For that reason, I only reference it at powerful, dramatic moments, like this one. As Claire sinks into the water, the score tells us she is ready to join her long-lost daughter in the afterlife.

However, Jamie dives into the swirling ocean to save her, his bravery, his love underscored by a rousing 6/8 ostinato from the orchestral strings. The music modulates to a higher key, while the harp and piano once again state Faith’s theme. The roiling strings move ever upward as Jamie pulls her back to the surface, back to life. As they burst above the waves, the orchestra and penny whistle offer a soaring statement of their love theme.

The familiarity of their theme grounds our experience, reminding us that, despite the epic imagery of a hurricane roaring above the Caribbean, our hearts are still with Jamie and Claire. We are always experiencing this story through them. 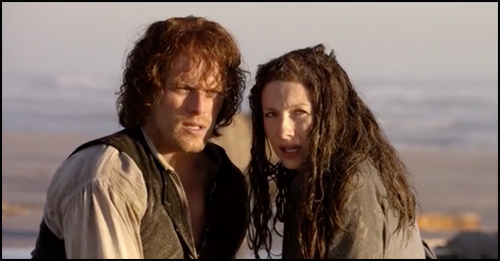 I end this third season as I did the first two, with a soaring quotation of the Stones Theme, the melody that represents mysticism and epic journeys, as the camera pans up to show us a glimpse of America, and adventures yet to come.

However, once the story concluded, I wanted to use this season’s end credits to tease next season, so I scored the credits with my fife and marching drums arrangement of “The Liberty Song,” one of the most famous pro-Revolution songs of the era. I loved the idea of the score pivoting almost jarringly to an entirely new American sound right at the end, a sound I suspect we will hear a lot more in the coming season. Besides, the music this season already included Scottish, British, Afro-Cuban, Chinese, Middle Eastern, symphonic and contemporary influences. Why not throw in fife and drums, just to complete arguably the most eclectic season of music I’ve ever created?

While my musical adventures in Scotland and the Caribbean may be over, I am excited to continue this journey and explore the music of the American Revolution in Season Four. I am grateful to everyone on the Outlander creative team for letting me be a part of this remarkable journey, and to all the fans who have embraced my score.