by Bear McCreary / Saturday, 09 September 2017 / Published in Blog, Films, Rebel in the Rye

Even before he began shooting, Danny Strong felt that one of the composers whose music was relevant to his film was Elmer Bernstein. Hearing that, my agent, Richard Kraft, enthusiastically recommended me, since I was Elmer’s last protégé and worked with him for nearly a decade. Danny was intrigued, but ironically, my own credits – predominantly science fiction, horror and fantasy television – worked against me.  Even I knew I was not an obvious fit for Rebel in the Rye. Determined to convince Danny, I wrote and produced several demos, over the course of six months. These works ultimately served as the creative catalyst for the score.

Danny’s idea to reference the music of Elmer Bernstein was appropriate, because Rebel in the Rye is the type of film Elmer scored frequently. In fact, Elmer spent the majority of the 1990’s scoring small character dramas like this. When I knew him, he was working on films like The Rainmaker, Introducing Dorothy Dandridge, Chinese Coffee, The Deep End of the Ocean, Keeping the Faith, Twilight (the Paul Newman noir film, not the sexy vampire one!) and Far From Heaven. I had also studied closely his scores for dramas such as The Birdman of Alcatraz, The Sweet Smell of Success, and To Kill a Mocking Bird, among others. 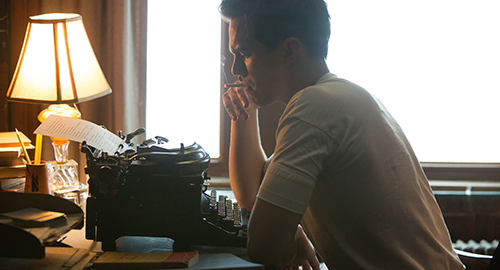 Over the first fifteen years of my professional career, I have worked frequently in various fantastical genres, but I have never scored a historical period drama (at least not one that did not involve time travel). Rebel in the Rye presented an opportunity to apply dramatic lessons I had learned from observing Elmer so many years ago, and to explore a different side of my musical voice. 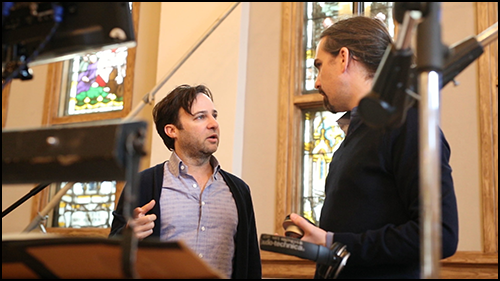 Scoring Rebel in the Rye was a truly collaborative experience. Danny Strong relocated from New York City to Los Angeles, and was a regular guest at my home studio. Together, we chipped away at the film three to four times a week, forming a strong creative bond. I focused my energies on crafting themes to support Jerry Salinger’s character arc, and I quickly discovered that one theme alone would not be enough. I needed two themes to represent different phases of his life.

The first, the Innocence Theme, is the cue that represents Jerry’s young life, before he is complicated by trauma and heartbreak. This melody, actually the first piece I wrote as a demo, is played most often by flute or piano, and has tremendous emotional value to me.

I wanted to write music Elmer Bernstein would have been proud of, that perhaps my young daughter may find meaning in years from now. I channeled all of my emotion into the Innocence Theme, and I hope that passion can be heard in the end result. I adapted my original sketch of the Innocence Theme into the film’s end credits music, and yet I placed it first on the soundtrack album, because it formed the creative well from which the rest of the score sprang. 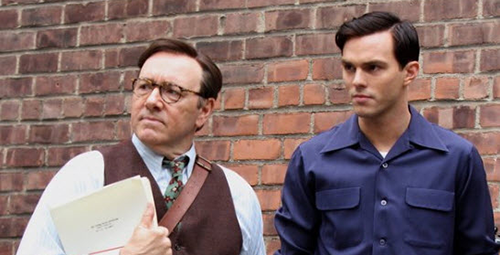 Danny and I agreed early on that a second theme would be necessary to propel the film’s narrative, one that represents Jerry’s genius as he writes. This second theme, the Inspiration Theme, forms the backbone of the score, and is featured prominently throughout the film’s writing sequences.

Inspired by the ferocious pace of Jerry’s typing, I composed dual piano parts in carefully orchestrated arrangements that reflected his emotional states. Fast arpeggios speed up as the film progresses, forming beautiful harmonic progressions. When Jerry writes with uninhibited inspiration, the pianos blur into a solid texture. When he struggles, the pianos become fractured and disjointed. When he can no longer write at all, the pianos disappear entirely. The use of piano in the score becomes an almost literal representation of Jerry’s emotional state when he writes.

To achieve the sound I was imagining, my engineer and I placed two pianos at opposite ends of a large studio. This gave us the epic reverb of a huge hall, but also allowed us to dial in the close microphones and separate out the two parts. I painstakingly arranged the rippling piano arpeggios so the two parts never overlapped on a single note, and this distinction is clear in the final mix in part because of their careful placement in the room. The result is a virtuosic piano texture that feels like its played by one person, when in fact it requires two accomplished pianists to create. This seemingly impossible piano part sound subtly reinforces the idea that Jerry’s creativity is outside the bounds of what his peers in the publishing world consider possible.

For the film’s most exciting moments of the Inspiration Theme, I supported the dueling pianos with a layer of small, metallic percussion: typewriter keys! In fact, the majority of the percussion heard in the orchestra is built from the typewriter. Writing for typewriter percussion was a fun way for me to increase the music’s energy, and incorporate that iconic clickety-clack sound from my childhood. 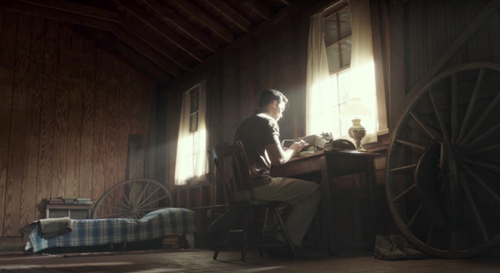 I also used contemporary synthesis to give the score a modern edge, and to represent Jerry’s horrific experiences in World War II. The presence of synthesizers against an otherwise fully acoustic and period-appropriate score stands out subliminally. For the second half of the film, these synths all but destroy the orchestra and pianos, replacing them with hazy, tense atmospheres that represent the echoes of war. Just as Jerry must overcome his personal turmoil to write Catcher in the Rye, the orchestra must overcome these synthesizer textures. 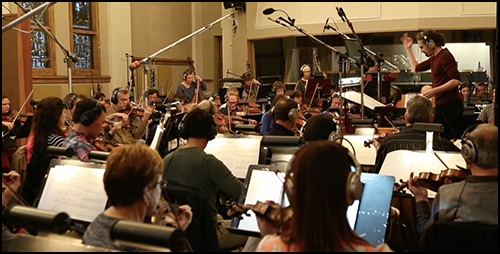 To confront his PTSD, Jerry enlists the help of a mentor, Swami Nikhilananda. These scenes represent a shift in the narrative, so I wanted to give them a unique musical color: Indian percussion and harmonium. Rather than layering contemplative beds, I treated the meditation scenes like a training sequence in a sports drama. The Indian instrumentation provides an energetic pulse from which the orchestra and piano duo burst forth. During a recent WGA screening, I felt that the moment when the pianos return, heralding Jerry’s gradual creative energy being restored, is one of the score’s most effective moments.

Rebel in the Rye features scenes at various clubs where live music is being performed, so clearly, big band and jazz recordings would be required. Danny I discussed the possibility of using original big band music to function as both source and score during these scenes, and I leapt at the opportunity. This approach gave us the chance to shape the source music to match the narrative’s needs. To achieve an authentic sound, I enlisted the help of a brilliant jazz arranger named Jeff Hoeppner. Getting the jazz cues right proved to be huge challenge. We hammered away at the songs until they found the right balance between source and score, and I’m grateful to have had Jeff in my corner for that process.

The Scottish folk song “Comin’ Through the Rye” plays an important role in Salinger’s book, and Danny always intended for it to have a home in the film. The song is featured in a pivotal montage, and for that, I brought in my wife, vocalist Raya Yarbrough. Fans of my music will recognize her voice from our various collaborations on Battlestar Galactica, and especially Outlander. Though a distinctly talented songwriter at heart, Raya is also an extremely accomplished jazz singer. Raya’s voice was the perfect fit for this period-appropriate arrangement, and allowed us to shape the song to the scene’s specific needs. (Coincidentally, I’d arranged this song once before, in a Celtic style, for a first-season episode of Outlander.)

The orchestra for Rebel in the Rye was recorded predominantly in Nashville, over the course of about two weeks. Conducting this score was a joyous experience, because I got to hear my melodies come to life, after several months of intense composition and revision. Danny was present for every moment of recording, offering valuable insight. I fondly remember sitting with him at the mixing console, discussing frame-by-frame narrative details, and making quick adjustments to improve the score.

During those sessions, I was struck especially by the evocative and lyrical flute solos by Phillip Dikeman. He intrinsically understood the emotion I was trying to convey. I am rarely so immediately impressed with an instrumentalist. I was deeply saddened to learn that Phillip was diagnosed with a terminal cancer shortly after recording Rebel in the Rye, and that he passed away less than six months after we finished recording the score. His contributions to my music were immense, and I am grateful to have worked with him. 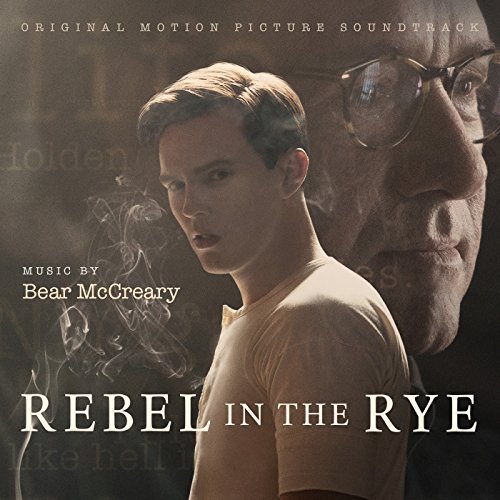 Between demos, sketches, score, source music, and the soundtrack album, I have been working on Rebel in the Rye for eighteen months. I am thrilled that the soundtrack album is out now, from Sparks & Shadows. It is currently available digitally (from iTunes, Amazon, or your favorite digital retailers), with a physical CD format coming soon (including signed copies, stay tuned for details). The album features my original score, source music, as well as bonus tracks built from my sketches and demos, including an album version of Oona O’Neill’s Theme, “Oonlight Serenade,” a percussion experiment called “Typewriter Drums,” and “Inspiration at War,” a cue I composed to match pages from Danny’s script before he’d even shot the film.

The percussive cadence of typewriter tapping has rattled around my brain since I was born. Scoring Rebel in the Rye gave me the chance to channel those sounds, both figuratively and literally, into a lyrical orchestral score. My score pays an obvious homage to Elmer, who I observed so many times tackling character dramas with a signature light touch. I like to think he would be proud of me this week if he were still with us. I am grateful to Danny Strong for taking a chance on me, and inviting me be a part of his unique vision of J.D. Salinger’s story. 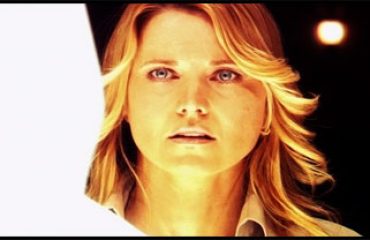 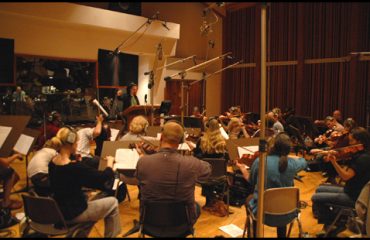