This week’s episode of “The Cape” features one of the most exotic orchestral scores I’ve written yet.  I explored new textures and colors with the ensemble and found sounds I’d never created before: dreamy atmospheres, rumbling thunder, shimmering glass and roaring waves.  All of this was accomplished using traditional orchestral instrumentation, but in ways I hadn’t before.

SPOILERS PREDICTED AHEAD: Dice introduces a new villain, the telepathic assassin calling herself Dice, played by Mena Suvari (American Beauty).  Like with all villains on this series, I set out to write her an original theme that would form the foundation of the episode’s entire score.

As I’ve suggested before, writing themes is the most time-consuming part of my job.  And unfortunately, I was quickly running out of time on this one.  With nothing else popping into my mind, I started playing around with the letters in her name and stumbled upon a simple theme using the notes D C and E.

At first, the three-note melody was a placeholder theme to get my composition started, but I quickly realized it would actually work!  So, the Dice Theme is literally spelling out her name over and over again.  (I borrowed this concept from Goldsmith, having realized his theme for the 1978 killer-bee horror cheesefest The Swarm was a melody using the notes B-E-E!)

We are introduced to Dice through a flashback that establishes her as a young girl.  She rolls dice in her room, and is somehow able to predict the number that each roll will produce.  The sequence has an elegant, dreamy look, thanks to director Michael Nankin who brought a similar sensibility to many outstanding episodes of “Battlestar Galactica.” I was inspired by the unique visuals to write a theme that had a floating, atmospheric nature – a cloud of pitches based on the simple Dice Theme melody:

First, the violins state the Dice Theme in a clear, precise manner.  Then they repeat it.  However, some sections of the string orchestra sustain the pitches longer than others.  Then, others play it faster.  Soon, the woodwinds and brass add playful variations of the melody, until the combination forms a murky, wall of smeared sound.  Yet, every melodic fragment is based on the D C E melody of the Dice Theme.

We reveal Tracy’s father, in a lab with Peter Fleming.  He studies his daughter like a science experiment, and gives off a really creepy vibe.  Here, I used muted trombones, muted trumpets and stopped horns to create a distinctly disturbing texture.

Soloistic woodwinds and harp dance playfully between the brass phrases, while the low woodwinds provide an ominous foundation.  This is a subtle moment, but the exotic wind, brass and percussion writing provides the weird laboratory environment an unsettling mood.

Fleming asks to meet the little girl.  She turns to him and makes a chilling prediction.  Here, I used the low strings and woodwinds to create a “gathering storm” effect.  Tremolo long notes are punctuated by quick rips up and down by a tritone.  Each section plays a unique line, resulting in a terrifying blur:

Above them, the violins gliss from their lowest note to a high chord.  When I was conducting this, I had to really hold the violins back, so they wouldn’t overpower the busy, fluttering phrases in the lower instruments.  The muted brass stab violently through the texture, adding even more chaos and energy.

That cue transitions us from the flashback to the present day.  Fleming is set to unveil a new device that can tell the future, based on the research his company did on Dice as a little girl.

Dice shows up at a casino and flirts seductively with Fleming.  The scene was a challenge because I wanted to underscore Dice’s sexiness, without sacrificing the tension.  I wrote a little tango to highlight the chemistry between them, complete with pizzicato strings and castanets:

I love using tango in my scores, as evidenced in Human Target and Step Up 3D.  This one is more subtle than most, however, and fits the scene really well.  I’m right on the edge of pushing it too far into a dance, but restrain from going all out.

The chemistry between Dice and Fleming is showcased best later in the episode when she has lunch with him in a restaurant, and instigates a plot to assassinate him.  While they have a conversation, she has rolled a coin across the floor, knowing precisely how it will set off a chain of events that lead to the heavy chandelier above Fleming crushing him.  And simultaneous to that, The Cape races to the restaurant to save Fleming.

I wanted to create a sense of impending danger for this “Rube Goldberg Death Machine” that Dice created, so I set up a relentless string ostinato that plays throughout the entire cue:

If there’s one thing I learned during “Battlestar Galactica” it’s that a kickass string ostinato will add excitement to a long sequence.  I also learned on that show that it will only take you so far, so you have to color it with more interesting musical activity, a lesson I applied here as well.

I let the strings and timpani take care of the first minute and a half on their own.  Then, I added the winds and brass, first providing longer tones and swells:

When Dice reveals to Fleming who she really is, the woodwinds and brass once again state the dreamy D C E pitch cloud that represents her theme, all while the strings relentlessly chug away at their ostinato.

As the scene continues, the thematic writing becomes more obvious.  The French horns add a pounding statement of the first half of The Cape Theme, underscoring Vince running to the rescue:

Shortly thereafter, the phrase is completed when the upper woodwinds play the second half of the theme, although in a much smaller arrangement.  As the sequence builds towards the climax, I momentarily broke up the ostinato.  The strings take over the melody for a majestic, soaring passage.  A few bars later, the ostinato kicks up again with renewed energy. 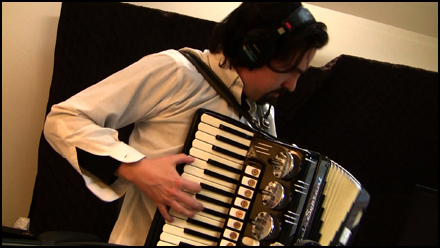 Like with most episodes of “The Cape,” I was also able to explore more ethnic music as well.  This week, Vince needed to master the art of the highwire so he could infiltrate Fleming’s party from a neighboring rooftop.  Thankfully, his Carnival of Crime buddies are here to help.

First, he learns to hypnotize himself into a dream state from Ruvi.  During this sequence, Ruvi describes how sleepwalking can be an effective tool.  This dream sequence would be perfect scored with a surreal cloud of pitches.  But, I’d already used this trick on the Dice Theme, so I knew I couldn’t use the orchestral instruments to do it.  Instead, I used the hurdy gurdy! 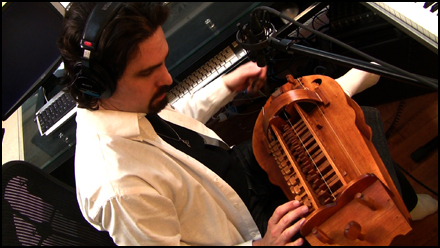 The hurdy gurdy is already associated with the Carnival of Crime, so it was an appropriate instrument to use here.  I overdubbed the instrument six times, and on each pass I played with the tuning pegs to shift it in and out of tuning at different times.  The result is a smear of waves that move in and out of sync as the tuning momentarily lines up and then drifts out again:

In this audio clip, the only sound you are hearing is the hurdy gurdy.  I didn’t augment it with anything else.  The sound is exotic and disorienting.

His next step is to learn highwire from Raia.  I’d already written a piece for Raia, in Kozmo, and I thought it would be nice to bring it back.  I guess this officially makes it the Raia Theme:

In Kozmo, her theme was set to a lilting waltz.  Here, it’s a seductive 4/4 groove.  The meter and rhythmic emphasis have changed, but the melody is still hers.

Medicine drums are the instrument I most commonly use for the Carnival of Crime percussion.  However, the drums in this cue should sound especially familiar to any “Battlestar Galactica” fan.  I asked percussionist MB Gordy to perform this piece on his frame drums, which were an essential part of the “BSG” score.

Despite all the beautiful orchestral colors at my disposal, it’s still the exotic Carnival of Crime music that provides “The Cape” score its unique tone.

The orchestra returns with a vengeance, though, in the climactic finale.  Ripping string arpeggios and searing brass lines underscore Vince as he struggles to cross the highwire.  Inside the party, Dice faces off with Fleming for a final time.  Listen for the return of the “Rube Goldberg Death Machine” ostinato, set beneath contrapuntal statements of the Chess theme in the low brass and upper winds:

Finally, she makes her move.  She has filled an elevator with deadly flammable gas and pulls out a lighter.  We’ve heard that “gathering storm” orchestral idea a couple times in the show by now, but never as menacing or terrifying as it is here.

The strings and low winds ripple through their low register, and soon the upper winds add their own flourishes.  Muted brass punctuate with stabs, while the orchestral percussion, including mark tree, suspended cymbal and timpani, add an increasing intensity:

The fully-orchestrated score for this effect is so cool, I have to share it with all of you:

At the climax of this sequence, the trumpets and horns blast a huge fanfare of The Cape Theme that practically blew the roof off the Eastwood Scoring Stage when we recorded it.  Needless to say, The Cape is doing something really badass at this moment!

The brass and percussion take center stage as the party erupts into pandemonium.  People flee for their lives and I wanted to heighten the sense of panic.  Eventually, only Fleming and The Cape remain.

The strings and low woodwinds create a rippling, cascading texture of arpeggios while a solo piccolo states the Chess Theme.  This not only creates tension, but hints at Fleming’s fragile mental state.  The score suggests Fleming could erupt into his Chess personality at any minute, making him an even more dangerous nemesis.

Dice is one of the most colorful scores I’ve written yet.  Special thanks are due to my entire music team, in particular orchestrators Ed Trybek and Henri Wilkinson, supervising orchestrator Jim Hopkins and consultant Neal Desby.  They contributed greatly to these beautiful sonic textures and I couldn’t have done it without them.

More great scores are coming up.  Thanks for reading! 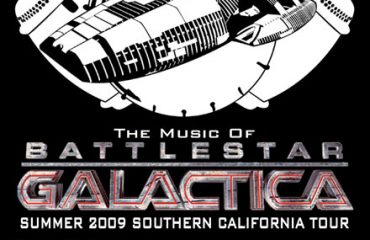 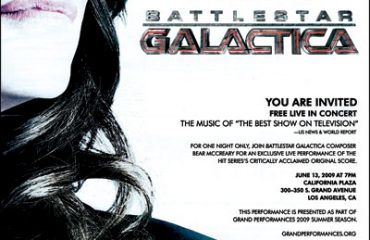 Send In Pix and Video from LA Concert Tomorrow! (UPDATED) 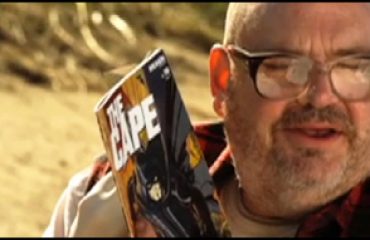