This week’s adventure pits The Cape against two oddball assassins named Goggles and Hicks.  The story poses the age-old question: why do assassins always try to kill you on your day off?  I wrote a theme for them featuring the tuba, as you’ll see in this week’s video blog:

SPOILERS BEYOND: The majority of this week’s score is built around variations of The Goggles Theme:

The first hint of it comes when Peter Fleming first meets him and enlists him to kill The Cape:

There is something inherently comedic about the actor’s performance and I didn’t want to completely destroy that with overtly menacing music.  So, I tried to find a way to write ominous music with a very subtle touch of levity.  The solo tuba provided the perfect combination of both. 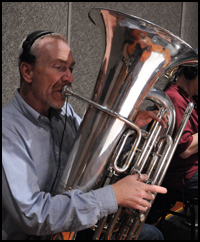 This melodic line has several leaps that allowed performer Doug Tornquist to be very expressive with the tuba.  Played on a higher instrument, such as a clarinet or flute, the tune would have a much lighter character.  However, the tuba really moves a lot of air – it’s a big sound!  When I had the tuba play this theme, the effect was a combination of playfulness and menace totally unique to the instrument.

Later in the episode, the assassins trick Scales and The Cape to meet, giving them a chance to tag Vince.  At the beginning of the scene, when Scales first enters, I clearly quoted The Scales Theme in the electric guitars, bass and drums.  However, when we reveal that Goggles is watching, the tuba enters with a full statement of his theme:

I especially like this passage because I wrote high enough on the tuba for Doug to use a little more vibrato than usual.  In that register, the tuba sounds almost like a trombone, but is noticeably heavier and more aggressive.

The Goggles Theme was not the only new melody I composed for Goggles and Hicks.  Trip encounters a new friend, Jerry, who lives in the same building.  Jerry is the classic archetype of the geeky, best friend.  I’d say he’s right out of the 1980’s, but this actor playing him probably wasn’t even born in that century… or even millennium!  Still, he reminded me of something out of a Joe Dante movie, so I wrote him a melody inspired by the brilliant Jerry Goldsmith scores of that era:

The accompaniment pattern is performed mostly on mallet percussion, timpani and synthesizers.  A small section of woodwinds provide the melody.  It’s an unusual sound for this series, but I wanted something unique to represent this character.

Even with all the quirky characters showing up this week, I still had plenty of chances to write big orchestral music.  My favorite such cue is at the end, when The Cape finally strikes back and takes out his assassins.

The sequence begins in a darkened theater.  The Cape suddenly attacks Hicks while Goggles watches helplessly from their van.  Under normal circumstances, if Vince jumped out of the shadows and started kicking a bad guy’s ass, I’d bring out the brass fanfares and play something triumphant.  But not here.

The way this was cut together, Goggles is momentarily our protagonist, not Vince.  So, the score is filled with dread as his partner is being attacked by The Cape!  Goggles is genuinely worried about his friend.  The dissonant music heightens the intensity:

The string section glisses from one nasty cluster down to another, as the percussion, woodwinds and brass offer increasingly chaotic counterlines and swells.  What sounds like a big mass of orchestral noise actually requires a lot of energy to compose and a massive amount of time to orchestrate.  However, when done correctly, the result gives the impression that everyone in the orchestra has gone completely insane.  (You can look forward to a lot more orchestral madness in the next two episodes!)

The Cape and Orwell track Goggles to his van and kidnap him, while Hicks leaps atop the vehicle.  The orchestral score here switches back to Vince’s perspective for the most exciting musical passage in the entire episode:

The chugging string and low brass ostinato is punctuated by the brass’ alternating statements of The Cape Theme.  Simultaneously, the upper strings provide a slinky, ascending melodic countermelody.  All the while, pounding percussion drives the suspense to a boil.  This is what action cues are all about! 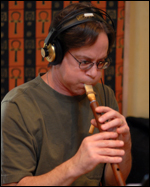 This episode had a few other musical surprises in it as well.  In the opening scene set in Afghanistan, we see Hicks’ skill with a sniper rifle when he kills a victim from an incredible distance.  The imagery of the Middle Eastern desert, with its searing heat and white hot sand, immediately brought to mind an exotic instrumentation.  I underscored this reveal featuring two of the musical stars of the “Battlestar Galactica” soundtrack: Chris Bleth added a wailing duduk solo, and M.B. Gordy blasted an intense dumbek groove.  I hope a few “BSG” fans smiled when they heard these familiar musicians.

Goggles and Hicks also features a world-premiere single from Brendan McCreary’s new band Young Beautiful in a Hurry.  During the scene where Orwell and Vince talk in a diner, the joint is playing their epic song “Trust Me” in the background.  The band’s debut album will be available later in the year, but for now, check out their first single, “Lightyears,” at their official site.

The next two episodes of The Cape feature scores that are very special.  Follow me on Twitter for exclusive photos and updates from the recording sessions, and of course, check back here next week.  Thanks for reading.