In Triggerfinger, the threat facing our heroes in “The Walking Dead” continues to expand beyond the realm of the undead.  Despite the external threats from other humans, we also get the sense that the greatest growing danger may in fact be coming from Shane.  For that reason, you will hear new developments tonight in the Shane Theme, as detailed in the video blog:

There are multiple facets to the Shane Theme, as I have described in detail in my blog entry for Cherokee Rose.  In Triggerfinger, I found that Shane is unraveling to the point that the melodic, acoustic guitar-based section of his theme really didn’t fit anymore. So, I went back and brought in the haunting hurdy gurdy melody that will continue to reflect his fractured view of the world in coming episodes.

Triggerfinger featured some fantastic action cues.  I had a lot of fun with the scene where zombies are closing in on Herschel, Glenn and Rick while their prisoner is stuck on the iron fence.  But, my favorite action cue was the sequence where Lori is trapped in the car while the walker presses through the broken windshield to get at her.  The visuals were truly horrifying and instantly inspiring. 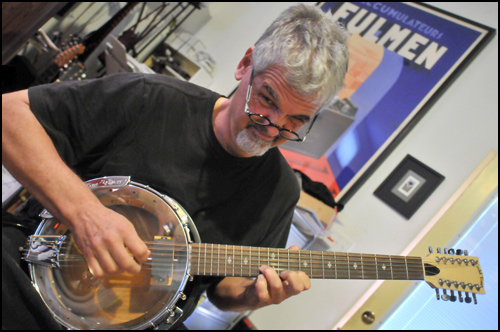 This was my first opportunity in the second half of season two to bust out the heavy drum set, distorted banjos, dulcimers, autoharps and dissonant string clusters that define so much of my work on “The Walking Dead.”  And as you can hear, Steve Bartek’s distorted banjo really cut through the chaos to add a piercing terror:

The electric banjo has always functioned as the definitive instrumental color associated with zombies and their impending danger.  This idea will continue to evolve in the coming episodes.  However, Triggerfinger was tricky because it introduced new non-zombie threats that needed musical attention.

The sequences with Rick, Glenn and Herschel fending off unknown assailants at the bar gave me a chance to be very sparse and atmospheric.  The producers and I wanted these scenes to function without music as much as possible, so that every creak of the floorboards and every breath would add maximum tension.  Then, we allowed the score to sneak in later with subtle beds of string clusters and synth drones:

Some of the oscillating synth textures in these cues were sounds designed by my frequent collaborator Jonathan Snipes, created using analog synthesizers.  The raw synth sound gives the score just a taste of that classic 1980’s horror musical sensibility without going too far.  At least, that’s my hope.  (And I should know!  I intentionally took these sounds way too far in my recent score for Zom-B-Movie!)

Perhaps there’s some irony in my choice of instruments here.  I used cold synthesizer textures to represent the danger presented from (living) humans and vibrant instruments played by live players for the danger from the undead zombies.  That is almost counter intuitive, isn’t it?  This wasn’t done on a conscious level, but strikes me as funny now that I’m looking back on it.

I had some fun with the closing scene and end credits for Triggerfinger.  At the end of the episode, Lori has a private moment with Rick, telling him what’s happening with Shane.  Now he finally begins to understand the problem Shane could present. The camera slowly pushes in on him in a dramatic tracking shot, and I introduce a dark, undulating distorted synthesizer texture (similar to the ones used earlier in the episode).

When we cut to the credits, that cue transitions to an original song I co-wrote with Jonathan Snipes called “Tears of the Demon.”

Typically, Snipes designs custom sounds and textures for me to use in my scores.  He and I have collaborated on many projects over the years, including “Battlestar Galactica,” “Human Target,” “Caprica,” “Terminator: The Sarah Connor Chronicles,” “SOCOM 4,” “Wrong Turn 2,” “Dark Void”… well, I’m going to stop there, but the list goes on.  (I wrote a fun blog entry about working with him on his last record: The End of Irony.)

“Tears of the Demon” was the first time we collaborated together as composers.  I always felt this piece had a strong “Walking Dead” feeling about it.  Distorted plucky electric guitar effects and wailing electric violin soar over a searing electronic foundation, with a layer of orchestral strings.  We composed and produced the song together last year just for fun and didn’t plan on using it anywhere.  It was just an experiment for me to play around in a “dubstep” playground.

A few months later, when I first watched the rough cut of Triggerfinger, I couldn’t help but think that maybe “Tears of the Demon” could find a home in the narrative.  The relentlessly electronic texture, even though most of it plays over the end credits, reinforces the idea that Rick’s world is changing, because it is a musical departure from our typical soundtrack ensemble.  He just returned from a harrowing journey, defending his family from external threats.  Now he faces the harsh reality that he must defend them from within as well.  “Tears of the Demon” captured his grim outlook.  The producers agreed and so it became the end credit music for Triggerfinger.  (Note: The end credits song is cut short on the AMC broadcast, but it’s there on the digital releases and DVDs.)

Only four episodes remain in Season 2.  I can’t wait for you guys to experience the chaos and emotion!