Tonight’s episode of “The Walking Dead” proved to be my biggest challenge yet on the series.  There were so many opportunities to create a dark, rich and bottom-heavy sound, I decided to make our string ensemble even more unusual.  I wrote the score for Vatos with an orchestra made up entirely of celli and a single contrabass, as shown in this week’s video blog:

SPOILERS AHEAD: The episode begins with an important emotional scene between Andrea and her sister Amy.  I wanted to highlight their intimate relationship, thus helping set up the bitter final scene:

I left a lot of air in this cue, to leave room for the dialog.  Gentle strings and piano float in and out against a droning backdrop.  Despite the simple arrangement, these chords are actually among my favorite from the score thus far.  It is so rare that I get to play in this harmonic language, because the music is generally so bleak.

Contrary to my first impulse, the episode called Vatos does not involve Rick and Shane encountering Oingo Boingo drummer Johnny “Vatos” Hernandez although, as you can see, that would make a scary storyline for Season 2.  🙂

Instead, it centers on the trouble Rick and his friends encounter on their journey into Atlanta to rescue the now-handless Merle.

The first big action cue begins right as Glenn sneaks into the crowded street, hoping to score the bag of guns Rick dropped in the first episode.  Propelling him forward, the cello orchestra introduces a chugging ostinato in an off-kilter 13/8 meter:

As I mentioned in the video blog, this cue was blisteringly difficult, and required a massive amount of rehearsal time to settle in.  The ostinato itself was tough enough, but then the first and second cello had to learn a lead line that is probably the most difficult passage I’ve ever composed.

The resultant cue was worth all that extra effort, however.  I wanted to amp up the tension when Daryl is suddenly attacked by a gang member, and this aggressive melody did the trick:

The fast, jagged phrases are unpredictable and follow no musical pattern.  Though hard to play, it lends the cue remarkable tension.  When I hear something like this, I instinctively tense up.  I hope viewers out there had a similar reaction.

More gang members show up and kidnap Glenn.  As the combat escalates, the music shifts as well.  Letting the celli take a backseat for a moment, I brought the guitars to the forefront, allowing Steve Bartek to alternate bizarre solos on both the electric guitars and electric banjo. All the while, the autoharps and dulcimers unique to this score jangle away in the background:

In the next act, Rick and the guys approach the vatos’ lair, in hopes of trading hostages.  And here enters Paul Cartwright’s haunting fiddle, an instrument we’ve never yet heard on this series. 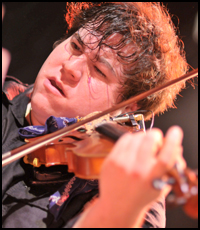 I trust most readers are familiar with Paul because of his amazing solos on “Battlestar Galactica,” “Dark Void,” “Terminator: The Sarah Connor Chronicles,” “Wrong Turn 2” and more.

As they approach the head vato and then negotiate with him, a simple electric bass and pizzicato cello groove sets the mood.  Over this, Paul’s electric violin provides an eerie, country / western sensibility: 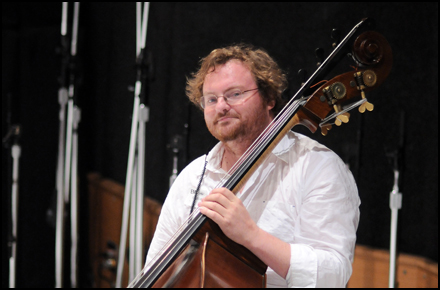 Vatos ends with full-scale combat, but not the gangland battle we were expecting.  Instead, the episode culminates in a brutal zombie attack on the campsite.

Zombies are everywhere, and Shane does his best to hold them off with shotgun blasts.  I had immense fun scoring this sequence, because I chose to set it in a Southern bluesy 6/8 groove:

The basic rhythmic structure and arrangement could almost sound like a typical blues song, except the harmonies are all screwed up.  And adding even more tension, the orchestral strings, electric banjo and electric violin each add their own dissonant, conflicting phrases, blurring the groove into a terrifying country western cacophony.

This is the kind of musical mash-up that makes this series so enjoyable to score.  All the instruments fit together, but just barely.  Each is doing their own idea that, by itself, would not necessarily register as scary.  But, when they’re all smashed together, the result is exciting, terrifying and also a little fun.  Well, I think this stuff is fun, anyway.  🙂

Alas, the episode ends on a dark note.  Amy is bitten and lays dying in her sister’s arms.  As a fan of the comic, I knew this was coming, and yet it still somehow caught me off guard.

I thought the most powerful emotional impact could be achieved by thinning out the musical texture to just that cello orchestra.  The somber chords, punctuated gently by a distant banjo and fiddle, formed the perfect sonic backdrop for this crushing sequence:

Only two more episodes remain in this season, which has gone by very quickly it seems.  If you want to read more about the score and it’s inspiration, AMC’s official blog just posted an interview with me that offers further insight.

In my blogs thus far, I’ve mostly covered my creative process and the recording sessions.  Next week, I’ll show you guys all the steps that happen between and after that make this music a reality.  Happy Thanksgiving to everybody eating turkey on Thursday!