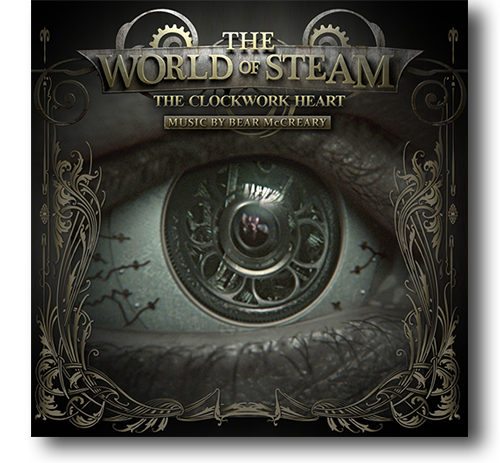 “The Clockwork Heart” is the first episode of “The World of Steam,” a new webseries by Matt Yang King. The concept is elegant: a “Twilight Zone”-style anthology series set in the steampunk genre. During its run on Kickstarter, where it set a record for webseries fundraising, the pilot was endorsed by some very well known geek trendsetters, including Wired, Buzzfeed, Grant Imahara, Felicia Day (with whom I worked on “Eureka”) and Maurissa Tancharoen (with whom I work on “Marvel’s Agents of S.H.I.E.L.D.”). However, none of these people had any influence on me deciding to score “The World of Steam.” I scored this film because it is just really damn good.

The elegant story and innovative steampunk visual aesthetic immediately hooked me. Yet, it was the film’s reliance on musical storytelling that made it especially appealing. Here was a rare opportunity for lyrical scoring where the music would be at the forefront of the drama. 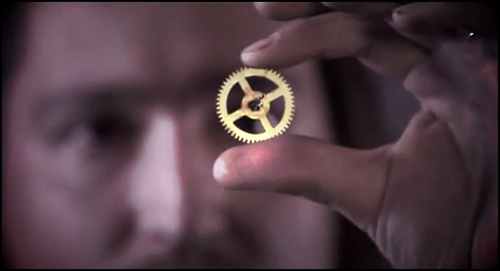 The first thing that stands out about this score is the mechanical percussion. Inspired by the steampunk visuals, I collaborated with sound designer Daniel Colman (with whom I’ve worked on many projects, including “Battlestar Galactica,” “Defiance” and “Marvel’s Agents of S.H.I.E.L.D.”) and my assistant Michael Beach to construct a series of ‘sound percussion’ instruments, built from samples of various gears, clocks, pistons and motors. The series’ Main Title is built entirely from these sounds, and contains no traditionally normal musical instruments whatsoever.

To offset that mechanized pulsing, and to represent the touching love story at the film’s heart, I combined those sounds with an intimate chamber orchestra of strings, woodwinds, harp and celesta. This dichotomy of sounds in the soundtrack underscores the film’s underlying theme: an exploration of the contrast between human imperfection and mechanical precision. Listen carefully to the use of orchestration throughout the film and you’ll notice the live orchestral instruments during the ‘human’ sequences and the mechanical elements during the scenes about the automaton robot. On occasion, they may play simultaneously, but in each case, I am clearly favoring one over the other. There are only two moments where the live orchestra and sampled gear percussion are featured in equal measure, striking a harmonious balance of machine and live performance. (Watch the film. I won’t spoil it!) 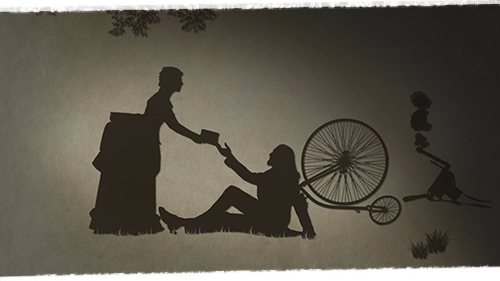 A good love story requires an effective love theme. And with only a handful of dialog here, I knew this film would rely on melody more than most. Making reference to the dancing that pervades the film, I wrote the primary love theme as a gentle waltz:

This theme is featured throughout the film, first as a flute solo in the opening scene, then prominently on a music box during the animated flashback. Matt employed the music box to great dramatic effect in his story, so it was the perfect opportunity to introduce the theme in a striking way and cement the tune in the minds of the viewers. This gave me great flexibility later in the episode to manipulate the theme in subtle ways. 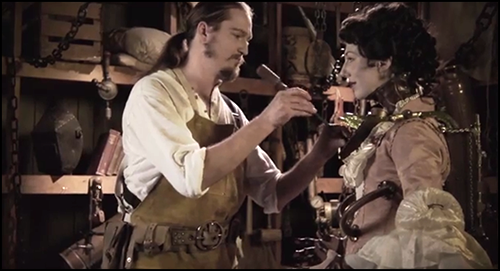 My favorite passages come from the montage where the main character works in his lab. Here, the live strings emulate the chugging gears and pistons with a fun ostinato that builds in intensity as he works:

Against the delicate string groove, the metallic gear percussion strikes with deep, rich booms, almost like distant timpani or a gentle roll of thunder. The result is shockingly powerful. Going in, I wasn’t sure the piston percussion would work at all for these uplifting or inspirational passages. Nevertheless, the combination of sounds worked beyond my wildest hopes.

“The World of Steam: The Clockwork Heart” allowed me to do what I love most, to tell a story through melodic music. You can enjoy the score in the film itself, or get the musical experience on its own with the complete soundtrack album, available from iTunes as a digital EP through my label, Sparks & Shadows.

Thank you all for reading along this year, loyal blog readers. With “Defiance,” “Da Vinci’s Demons,” “Europa Report,” “Marvel’s Agents of S.H.I.E.L.D.,” “I Forever,” “Don’t Stop Me Now,” “Battlestar Galactica: Blood & Chrome,” the “Caprica” soundtrack, “Metalocalypse: The Doomstar Requiem” and the new season of “The Walking Dead,” I believe 2013 saw more of my music unleashed upon the world in a single year than ever before! And 2014 may shape up to be just as exciting. For a preview of the madness to come, check out Entertainment Weekly’s sneak peek at my “Black Sails” Main Title Theme. See you in 2014.