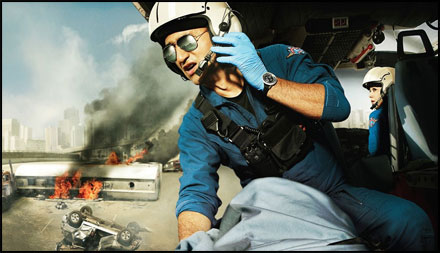 Contrary to completely unfounded rumors of a cancellation, Trauma returns TOMORROW to NBC, and airs every  Monday at 9/8c, beginning the completion of our first season!

To celebrate our return, I’ve decided to write a blog entry about my favorite cues I’ve written for the series thus far, including audio snippets.

First up, the Trauma Main Title:

One of a handful of TV theme songs to ever be in a 7/4 meter, this piece of music summarizes the intense energy of the show and introduces the core ensemble at the heart of the score: a rock and roll rhythm section.  In addition to the guitars, bass and drums, there is an added layer of manipulated sound effects, comprising of distorted and cut up ambulance sirens and helicopter rotors.  This isn’t just a theme song gimmick, these sounds are a vital part of the unique signature sound of the Trauma score. 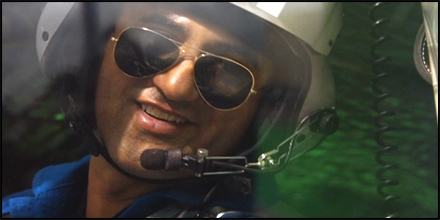 The teaser of the pilot opens with a pretty kick ass helicopter explosion, but before that we see all our main characters trying to save a construction worker who had been electrocuted.  The rest of the pilot dealt with some pretty heavy issues of loss and abandonment, so it was important to establish a lighter tone in this first scene.  So, the score focused on Rabbit’s rebelious attitude more than on the immediate danger:

One of the unique aspects of the action cues in Trauma is that I always try to write in odd meters, forcing the music to feel a little uncomfortable and tense.  So, one of the ways I made this first action cue feel less tense was to set it against a very accessible 4/4 rock groove.  Everything is going fine until the very end of the cue when, without warning, Rabbit’s helicopter collides with another one. 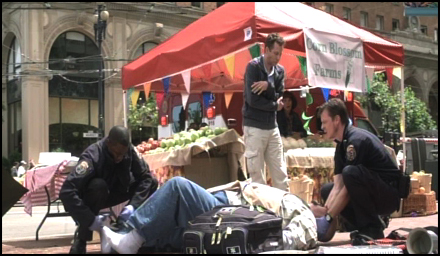 The first clip really focused on the rhythm section.  This one gives you a great example of the sound design elements of my score in action.  The first fifteen seconds of this cue are composed entirely with helicopter rotor sound effects.  I was careful to alter them enough so that an audience would not confuse them with real helicopter rotors in the sound effects track:

When the band kicks in, the riff is a relatively abstract 7/4, subdivided into 4/4 + 6/8.  Thankfully, its more complex than it sounds, because whenever I listen to it I just get into the groove and completely forget the weird meter.  “Embarcadero Street Fair” was a massive 6 minute cue that basically stretched across the entire act, so I was able to explore this riff and generate lots of variations as the scene went on. 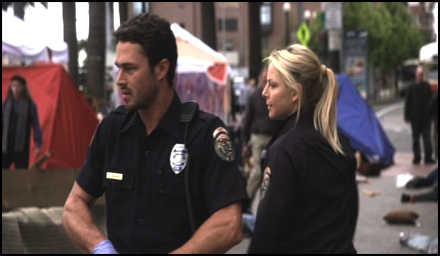 I asked executive producer and director Jeffrey Reiner about why we chose to score Trauma with such unusual instrumentation. “I felt the kinetic energy of the show needed sounds that could match it,” he told me. “I’m not a big fan of traditional action scores.  We were also using a lot of Rock and Roll including noisy guitar rock and the songs had to mesh in with the score.” 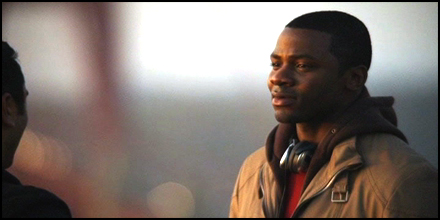 Thankfully, the entire score isn’t 7/8 prog-rock with cut-up helicopter samples.  A little variation is always a good thing.  This cue, from the pilot, is a great example of the emotional music I write for this series:

A solo guitar begins, augmented eventually by a second guitar, bass, synth pad and rhodes.  In order to contrast the chaos of the action and suspense cues, I found that simple and sparse emotional cues were much more effective.  Reiner told me this approach “had come from my experience of working on ‘Friday Night Lights’ where we used alternative tuned guitars to play the pieces.  Explosion of the Sky was the inspiration.  I thought the sparseness would contrast nicely with the amped up vibe of the action sequences.” 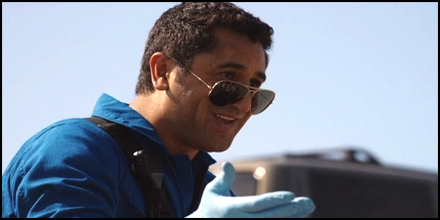 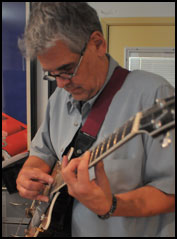 Another cue from the pilot, this cue introduced a quirkier side of the musical personality of this series.  Rabbit is back on the job for the first time in a year since the tragic helicopter accident.  Rather than being cautious and taking it slow, he’s jumped right back on the horse and has the same rambunctious attitude he had in the episode’s teaser.  But, things are a little off now.  The rest of his team is on edge, both because of the highway wreckage they are sifting through and also because many of them aren’t sure if Rabbit is ready to come back at all.  In order to capture these competing emotional ideas, I wrote a stuttering percussion riff and let Steve Bartek play a truly bizarre improvised solo above it:

Typically on any series, I write a melody for each character.  But, a melodic thematic approach on this show would feel goofy and out of place.  This cue was a turning point for me in the early days of scoring Trauma, because it showed me that the trick to this show was to treat timbres, instruments, textures or grooves like themes instead of melodies. 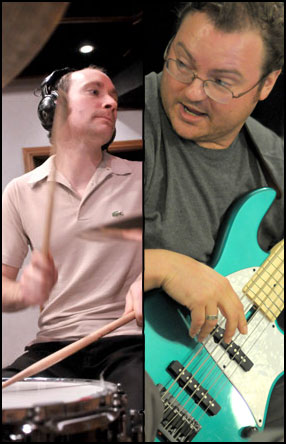 So, Bartek playing this type of solo over this type of groove became a “Rabbit Goofing Off” Theme.  And I always love giving Steve Bartek an excuse to play weird solos like this, because there’s no one else in the world with his unique sound.

This is the action groove for the big set piece in the pilot.  An energetic rock groove that feels like 6/8, its actually 13/8 (technically, I notated it as a bar of 6/8 followed by a bar of 7/8, because 13/8 gets pretty ponderous on the page).  Trauma regulars Nate Wood (drums) and Mike Valerio (bass) hold down a heavy groove while Steve Bartek plays wailing ambient solos: 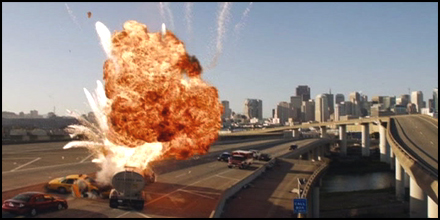 Around the middle of this clip you can hear the groove change to a more emotional feel while a solo electric guitar with a tremolo effect enters.  This texture was how I cleared a space in the score to accmomodate certain emotional beats, for example a panicking mother trying to help her son who is dying of a shrapnel wound. 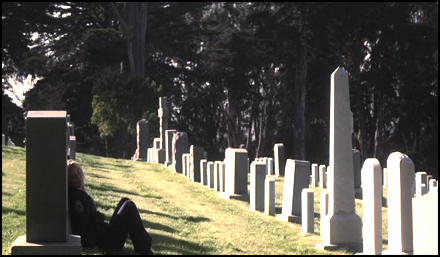 On occasion I get to play in a totally pop language and write a song that underscores a big montage.  This cue is one of my favorites:

The whole song is about 4 minutes long and really builds up nicely.  We’ve found that sometimes it’s better to score these montages instead of using pop songs, because it allows me to subtly shape the song to fit the drama, without shattering the pop song feel. This track also features regular series musicians Brendan McCreary, Ira Ingber and Ed Trybek on guitars, and M.B. Gordy (of “BSG” taiko fame) on drums.

Working on a show that uses pop songs in addition to score is a new experience for me.  Jeff Reiner provided a unique perspective on how songs can function in visual narrative, saying “with pop songs you can play irony much more clearly.  A man singing Tom Petty’s ‘Freefalling’ while about to die from hitting a deer is an example.  Pop songs bring immediate memories and emotions to the viewer and it also can tee up the score.” 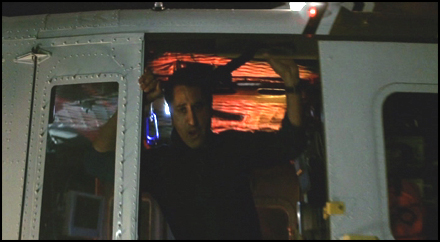 This cue underscored a particularly dark and unsettling sequence where Rabbit goes up in a helicopter during a storm and stands right outside the open door.  I wanted to capture the hypnotic feel of his trance-like state of depression:

The bulk of the percussion you’re hearing actually is an acoustic drum set that we’ve distorted beyond the point of being recognizable. 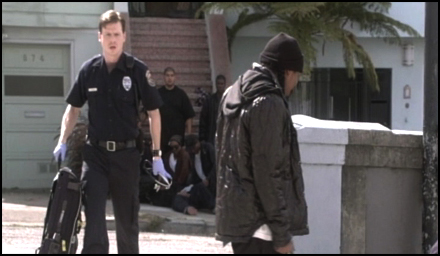 Continuing the theme of irregular meters, this one is a pretty nasty 5/4:

Beneath the fat heavy metal groove you can hear helicopter rotors and a pretty mean Bartek rhythm guitar line.  Often times, gang shootings in film and television are underscored with hip hop.  I didn’t want to go down this road at all, because it wouldn’t feel genuine to our series.  Instead, I amped up the distortion in our Trauma ensemble. 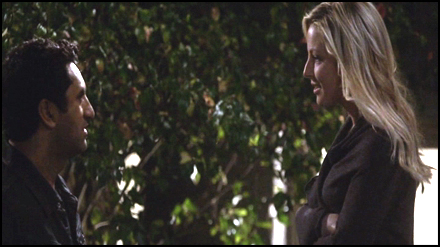 The Thanksgiving episode finally began to expand upon the conflicted relationship between Rabbit and Nancy.  This ending sequence was really touching and I was happy they asked me to score it instead of using a pop song:

This is ludicriously simple piece is glock rock at its most shameless.  But it works, and really fit the sequence well.  After all the crazy mixed meter and distorted sound efects, writing this was a welcome change of pace. 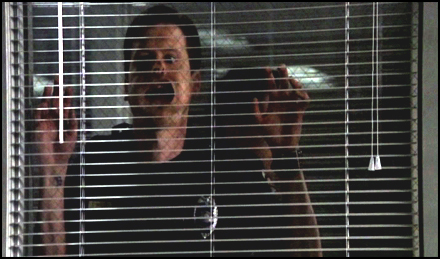 Marisa Has to Pee and Tyler is Really Bored

This has got to be one of my best cue names.  But it basically sums up what’s going on in the scene:

[audio:https://www.bearmccreary.com/wp-content/uploads/2010/03/trm10.mp3|titles=Trauma – Marisa Has to Pee and Tyler is Really Bored]

For the first four or five episodes, I kept scoring comedic moments with slow, funky 70’s-inspired grooves.  And without fail the producers kept throwing them out.  But, I just knew it was the right sound for the show.

And eventually, they came around.  The cue was called “The Missing Tongue” and dealt with Tyler and Boone, well… looking for a guy’s tongue.  But, it had this comedic hip-hop groove and it finally clicked, becoming their unofficial theme. “The Boone Tyler score was a salvation of sorts,” Jeff Reiner explained. “Our show deals with death, dying, and near death at all times.  We love how the show can go into sections that are character driven and in their case, Odd-Couple-like.  The score just hit the sweet spot and we have broadened it’s use beyond those characters.“

This style of writing became a major component of the Trauma score.  Another good example is… 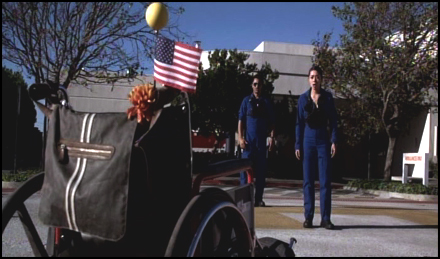 While it sounds like a simple groovy piece, this composition (like the others in this style) function as pretty sophisticated score.  Every single drum hit, bass fill or guitar riff is put there to accent a line of dialog or visual gag:

These selections are just a handful of my favorite cues from this show.  The music tends to stay in the background (where it belongs) on this series, so I bet you guys haven’t caught a lot of the cool musical nuances we’ve thrown in here.  What do you think?  Does this score rock or what?

Check out the rest of our season with new episodes every Monday on NBC at 9/8c and keep your ears out for even more cool tracks.