The 7th International Film Music Festival Ciudad de Úbeda has just announced my participation in their renowned festival, from July 18th to 24th, in Spain.

I was nominated for four of the festival’s Goldspirit Awards, including BEST COMPOSER and BEST SCORE.  I am truly honored to be awarded BEST TELEVISION SCORE for my work on “Human Target.”

I will take part in the Úbeda festival in a number of exciting programs.  On July 21st, I will conduct a chamber orchestra in an intimate recital setting.  This up close and personal concert will feature world-premiere arrangements of music from “Caprica,” “Terminator: The Sarah Connor Chronicles,” ‘The Walking Dead” and “Battlestar Galactica.” END_OF_DOCUMENT_TOKEN_TO_BE_REPLACED 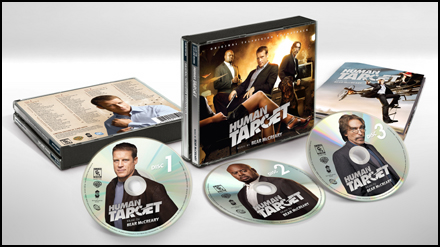 This week, my “Human Target” soundtrack is finally released!  More than two hours of score are available for download from iTunes, courtesy of WaterTower Music.  La La Land Records has released a limited edition 3 CD deluxe set, featuring 62 tracks totaling nearly 4 hours of music.  In addition to an hour of exclusive bonus tracks, the CD set also includes unreleased demos and sketches that chronicle my creative journey as I wrote the Emmy-Award-nominated Main Title Theme.  This album marks the first time I’ve ever released my sketches to the public.  The CD packaging also includes a unique booklet. 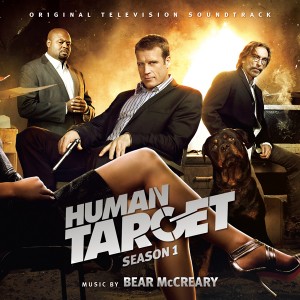 The CD set is available for order directly from La La Land Records’ website, beginning tomorrow (Tuesday 10/19 at 1pm Pacific).  I’m autographing booklets for the first 150 orders, so move fast to get a signed one.  However, if you want to be guaranteed a signed CD, order them from Dark Delicacies’ website (click on “Signings / Events” in the top left corner).  CDs ordered through Dark Delicacies can have personalized autographs.  However, the absolute best place to get the album is come to the signing taking place this Sunday, October 24th, 2pm, at Dark Delicacies in Burbank (3512 W. Magnolia, Burbank, CA 91505).

What makes “Human Target” so special?  I have written several scores that have resonated with soundtrack fans.  But, take it from me as a fellow film score geek: the 3 CD set of “Human Target” was written just for you.  Because in writing it, I returned to the style of music that made me first love music, and I believe my reckless creative joy can be heard in every note of this album. END_OF_DOCUMENT_TOKEN_TO_BE_REPLACED

My theme for Human Target has been nominated for Outstanding  Original Main Title Theme Music! Awesome!

Its an honor to be on a shortlist with so many wonderful composers.  (See the nominees.) There was some debate within the Academy earlier this year to eliminate this category altogether, so I’m also pleased that it still exists at all.  There are still great Main Titles being written out there, and I guess Human Target is one of them.  🙂

Tonight’s episode of “Human Target,” Christopher Chance, is the season finale.  It answers many questions that have arisen throughout the series, and asks new ones as well.  The episode is the culmination of my thematic approach to the series.  Characters we see for the first time, such as Katherine and the Old Boss,  already have their own firmly established musical themes.  Combining them with more familiar melodies, such as the Chance, Winston and Baptiste Themes, I wrote one of the most operatic scores of my career. 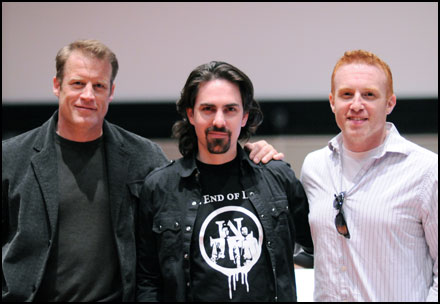 “The idea of scoring the show thematically, almost like an opera, was something that happened very early in the process,“ executive producer and writer Jonathan Steinberg recalled.  “For most of the audience, it’s not something that jumps out at them, but it’s a crucial part of the way we set tone, and the way our stories are told.  Using thematic music to that extent is a bit of a lost art, I think; score has become much more atmospheric for the most part in the last 10+ years.  But I think the music for ‘Human Target’ has contributed a tremendous amount to the positive reaction we’ve gotten from our audience.” END_OF_DOCUMENT_TOKEN_TO_BE_REPLACED

The shocking truth is finally revealed!  See who is really playing the trumpet solos for “Human Target:”